It’s Grammy Award season, yet again. This Sunday is the 62nd annual Grammy Awards and this week on the show, I’d like to feature some of the vocal jazz and traditional pop Grammy nominees, as I do every year. The vocal jazz category for 2020 is dominated by women, including mainstays like Tierney Sutton and Catherine Russell, as well as newcomers like Sara Gazarek. We’ll also hear from some of the traditional pop nominees, like Michael Bublé and Elvis Costello. And I’ll feature some singers who were nominated in the best arrangement category.

It’s a 2020 Grammy Award Preview, coming up next on Afterglow

[MUSIC - ELVIS COSTELLO AND THE IMPOSTERS, “SUSPECT MY TEARS”]

A nominee for Best Traditional Pop Album, that was “Suspect My Tears,” an original song from the album Look Now by Elvis Costello and the Imposters. Costello actually wrote that song about 20 years ago, but didn’t record it until now, and he said it was inspired by the songwriting of his mentor and sometime collaborator Burt Bacharach.

Mark Chilla here on Afterglow. On this show, I’m exploring some of the Grammy nominees for the 62nd annual Grammy Awards, taking place this Sunday. Now, the televised broadcast on Sunday night probably won’t feature any of the nominees that I’ll be discussing, which is one of the reasons why I want to give them this spotlight on this program.

I’ll begin with the vocal jazz nominees. This year, the category is completely dominated by women—which, honestly, is something you probably could say about the entire genre of vocal jazz today. First up is the 28-year-old singer Jazzmeia Horn, who is probably the odds favorite to win the award.

Horn was the 2015 winner of the Thelonious Monk International Jazz Vocal Competition, and in 2018, her debut album A Social Call was nominated for the Best Jazz Vocal Album at the Grammys. And now, her sophomore album Love and Liberation is up for the same prize. Horn’s voice is strong, confident, and capable of performing bebop, blues, ballads, and everything in between.

Here’s Jazzmeia Horn from her latest album with the Hubert Laws and Jon Hendricks song “No More,” on Afterglow.

Jazzmeia Horn in 2019 with “No More,” a track off her Grammy-nominated album Love and Liberation.

Another familiar nominee in the Jazz Vocal category is Catherine Russell. Like Horn, Russell has been nominated for the award before, but her jazz pedigree stretches back even further. Russell was a backup singer in the 1980s turned jazz singer in the 2000s, and her father Luis Russell is a jazz legend that worked with Louis Armstrong and King Oliver.

Here’s Catherine Russell from her Grammy-nominated album that hearkens back to the music of her father’s time. This is the title track “Alone Together,” on Afterglow.

Catherine Russell with “Alone Together,” the title track of her 2019 album, one of the Jazz Vocal Grammy nominees at this year’s awards.

The most familiar nominee in this category is probably Tierney Sutton. The latest from Sutton and her band, the Tierney Sutton Band, is an album called Screenplay, featuring familiar film songs from the past century. This album marks Sutton’s eighth Grammy nomination in this category—in fact, she has been nominated for every album she’s released since 2006, but has yet to win the prize.

Something I admire about Sutton is her ability to take a familiar song outside of the Great American Songbook and turn it into a jazz song. She’s done this with the music of Sting and Joni Mitchell, and she’s done it here on this album too.

Take for instance this next song. This is the Tierney Sutton Band doing a jazz ballad version of the song “Hopelessly Devoted To You” from the film Grease, on Afterglow.

The Tierney Sutton Band with “Hopelessly Devoted To You” from the 1978 film Grease. That comes from their Grammy-nominated album Screenplay, an album featuring jazz version of songs written for films.

The only Jazz Vocal nominee this year who has actually won the award is this next singer Esperanza Spalding. Spalding won it in 2013 for her album Radio Music Society, just two years after she became the first jazz artist to ever win the Best New Artist category, beating out favorites like Drake, Justin Bieber, Florence and the Machine, and Mumford and Sons.

Her latest album 12 Little Spells is her most experimental album to date, and that’s saying something for an artist who continues to push boundaries. 12 Little Spells is a concept album where each song corresponds to a different body part, from mouth and fingers to the more abstruse “solar portal.” The music and lyrics are equally daring, drawing upon experimental art music, while still grounded in Spalding’s melodic gifts.

Here’s the title track from the album, which corresponds to the body part of the thoracic spine. This is Esperanza Spalding with “12 Little Spells,” on Afterglow.

Esperanza Spalding with “12 Little Spells,” the opening title track from her experimental album of the same name, which explores parts of the human body. Her album 12 Little Spells has been nominated for a Grammy for Best Jazz Vocal Album, and that song also earned Spalding a nomination for the Best Arrangement, Instruments and Vocal Category.

I’ll turn now to the final nominee in the jazz vocal category and a newcomer in the Grammy world, Sara Gazarek. Gazarek has been performing, recording, and teaching for years now. But her latest album called Thirsty Ghost has earned her the highest critical acclaim to date and her first nomination in the Jazz Vocal category. Even more impressive, this track I’m going to play for you now also earned a nomination in the Best Arrangement category alongside Esperanza Spalding.

This is a jazz take on an American standard outside of the world of jazz, and a really fascinating reimagination too. Here is singer Sara Gazarek with Dolly Parton’s song “Jolene,” on Afterglow.

Sara Gazarek, and her take on the 1974 Dolly Parton song “Jolene.” That song was nominated for a 2020 Grammy for Best Arrangement, Instruments and Vocals, and Gazarek’s album Thirsty Ghost was also nominated for Best Jazz Vocal Album.

Coming up after the break, we’ll hear more nominees in the Best Arrangement category, plus some other Grammy Award nominees for 2020.

Welcome back to Afterglow, I’m Mark Chilla. I’ve been featuring some of the nominees for this year’s Grammy Awards, taking place on Sunday. And now I want to turn my attention to another nominee in the Best Arrangement category.

I’ve featured Jacob Collier on the show before: he’s a British wunderkind, who quite honestly, might be the most skilled living musician. He’s a multi-instrumentalist and singer who can easily perform polyrhythms and unconventional tunings that are well beyond the abilities of all but maybe a dozen or so musicians. I don’t always love his voice, but his music is dazzling.

This arrangement is fascinating. It’s all a cappella and modulates partway through to the perplexing key of D-half sharp major, which is crazy enough on its own. But in the introduction, he also creates a giant chord featuring the voices of over 150 of his famous friends, including Herbie Hancock, Quincy Jones, Chris Thile, and Hans Zimmer.

This is Jacob Collier with his maximalist arrangement of “Moon River,” on Afterglow.

Jacob Collier with his spellbinding maximal arrangement of Henry Mancini’s classic “Moon River.” That song is up for a Best A Cappella Arrangement at this year’s Grammy awards, one of his two Grammy nominations for Best Arrangements.

One more note about Collier: he got his start on YouTube as a teenager, and in fact, on his YouTube channel, he occasionally deconstructs his arrangements, going track by track in the architecture he created with the digital audio software Logic. He did this for both of his best arrangement Grammy nominations. He’s surprisingly upfront and clear about all of the musical choices he makes, and it’s an amazing insight into a brilliant musical mind. If you’re interested in this kind of thing, I’d suggest checking it out.

Speaking of arrangements, I’m going to turn to one more nominee in the Best Arrangement category for instruments and vocals. This one comes from singer Cyrille Aimée. Her latest album Move On: A Sondheim Adventure features her inviting take on the music of Stephen Sondheim. Aimée’s effervescent version of Sondheim’s “Marry Me A Little,” featuring sparkling guitars and strings, is up for a Grammy this year.

Here’s the brilliant Cyrille Aimée with “Marry Me A Little,” on Afterglow.

Singer Cyrille Aimée and her arrangement of Stephen Sondheim’s song “Marry Me A Little.” That song was nominated for the award for the best arrangement of instruments and vocals in this year’s Grammys.

Jazz singers turned up in several different Grammy categories this year, besides just the Jazz Vocal category. I’ll turn to a singer who is featured in the Best Latin Jazz Album category: Ruben Blades. If you’re familiar with Latin American music, then you should know the name Ruben Blades. He’s one of the most celebrated singers and bandleaders, and has been for over 30 years, winner many Grammy awards. His latest record Una Noche Con Rubén Blades features him performing most Latin Jazz songs with trumpeter Wynton Marsalis and the Jazz at Lincoln Center Orchestra.

I’ll play a Latin-ized version of a jazz standard. This is Ruben Blades with “Too Close For Comfort,” on Afterglow.

Latin jazz legend Ruben Blades singing with the Jazz at Lincoln Center Orchestra. That was “Too Close For Comfort,” from the album Una Noche Con Ruben Blades, a nominee for this year’s Best Latin Jazz Album Grammy award.

I’ll close off this hour of 2020 Grammy nominees with a nominee from the Best Traditional Pop Album category. This year features Christmas music from John Legend, political music from Barbra Streisand, Italian songs from Andrea Bocelli, and original songs from Elvis Costello. But I’m going to feature the album of standards from singer Michael Buble. Buble’s album Love is a reliably fun traditional pop album, and it even includes a handful of duets. This last song I’ll play is a duet with a person that we usually hear from around Grammy time, but who didn’t release an album this year.

This is Michael Buble and singer Cecile McLorin Salvant with their duet of the French standard “La Vie En Rose,” on Afterglow.

And thanks for tuning in to this 2020 Grammy Award preview this week on Afterglow. 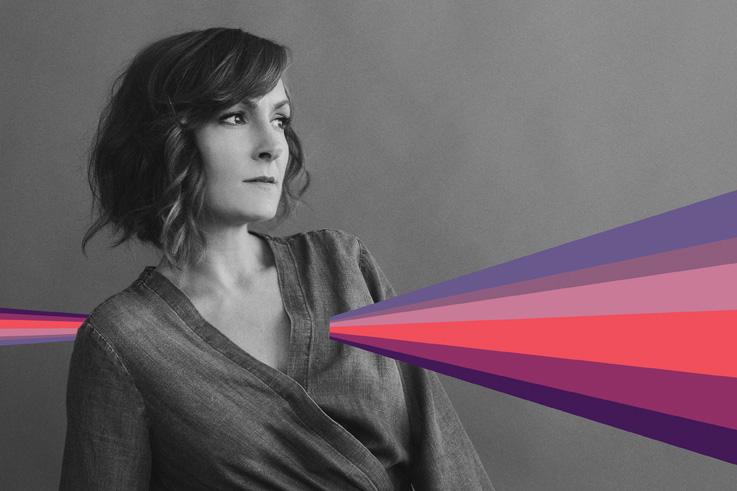 It's Grammy Award season, yet again. This Sunday, January 26th is the 62nd annual Grammy Awards, and this week on the show, I'd like to feature some of the vocal jazz and traditional pop Grammy nominees, as I do every year. The vocal jazz category for 2020 is dominated by women, including mainstays like Tierney Sutton and Catherine Russell, as well as newcomers like Sara Gazarek. We'll also hear from some of the traditional pop nominees, like Michael Bublé and Elvis Costello. And I'll feature some singers who were nominated in the best arrangement category, including Jacob Collier and Cyrille Aimée.

Many of these nominees were previously featured on Part 1 and Part 2 of my 2019 Recent Releases shows.

Grammy Nominees Featured on this Episode:

Best Arrangement, Instrumental or A Cappella: