Duchamp’s “Fountain” At 100, And The Black Lives Matter Songbook

Turning a urinal into a sculpture may have been a response to the atrocity of war; African-American music has long had its own way of registering dissent. 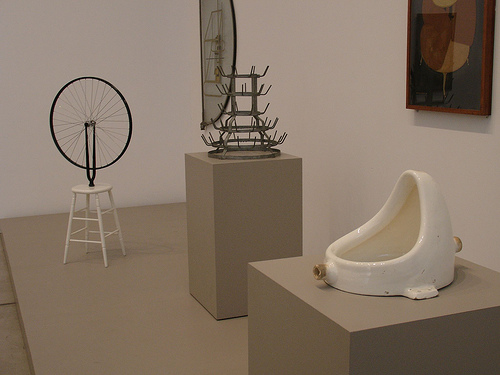 An icon of modern art is turning 100 this year. But even after all this time, its status as a work of art is still tenuous.

“We still have people coming into the museum saying things like, ‘Even a kid could make this,’ or ‘What’s the point of that? How is that art?’”
–curator Andrew Wang

Today at the café, we visit Indiana University’s Eskenazi Museum of Art to salute Marcel Duchamp’s Fountain on its centennial. The institution is one of only three museums in the world in possession of a complete set of seminal modern sculptures by Marcel Duchamp. One of the treasures of the museum’s collection, the Readymades began as a cheeky gesture. Jenny McComas, the museum’s curator of European and American art, and graduate assistant Andrew Wang, created an installation to mark the work’s centennial.

African-American music has its own time-honored tradition, and its own way of alienating certain segments of the public.

“When James Brown said ‘I’m Black and I’m Proud,’ he lost half of his audience.”

On the heels of last weekend’s Grammy Awards, we speak with IU musicians and an ethnomusicologist about representing Black experiences and waging the struggle for social justice in song. When Beyonce’s thematically and musically provocative recording Lemonade did not capture Album of the Year at last Sunday’s Grammy Awards, many in the music industry—including the artist who took the honor—cried foul. Music that addresses contemporary racial issues is not always welcomed or rewarded by the music industry or the record-buying public. Nonetheless, young musicians at Indiana University are still hoping to participate in the time-honored tradition of effecting social change through music.

A seminal modern sculpture began as a cheeky affront to long-accepted aesthetic criteria. At 100, Duchamp's Fountain has become a lofty totem of modernism.

Music That Moves Us: The Civil Rights Songbook