Portraits In Resilience: Titan Of The West & Versailles ’73

A show of Western and Native American art and a documentary about a fashion revolution tell stories of American resilience not widely told. 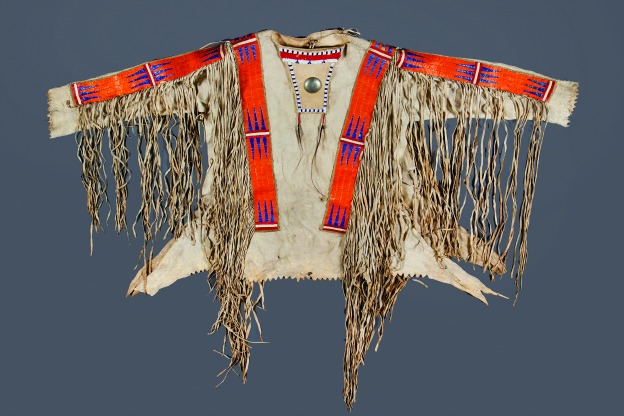 From cowboy songs to landscape paintings, Americans cling to the story of how the West was won–

“We’re looking at paintings that verified America’s idea of the conquest and assumption of control of the West,” points out James Nottage, chief curatorial officer of the Eiteljorg Museum of American Indians and Western Art in Indianapolis. “These are works that freeze the West in time in some ways, and Native cultures.”

But the museum’s new show provides an alternate perspective.

“Such things as a girl’s dress or a beaded baby bonnet or a cradle board,” Nottage suggests, “are expressions of something real in the lives of these people, but they’re also an expression of resilience.”

At the Eiteljorg, Native American artifacts claim their place alongside well-known landscape paintings in the show Titan of the West, which showcases the Kenneth S. “Bud” and Nancy Adams collection of Western and Native American art. When the owner of the Tennessee Titans football team died in 2013, the museum received a call from his attorney. Adams had left his collection of Western and Native American Art to the Indianapolis institution. His bequest is one of the three most important collections the museum has received since it was founded in 1989. The show is on view until February 5th, after which time the  artworks will be incorporated into core galleries throughout the museum.

Later, we’ll go on to investigate the theme of resilience in the worlds of film, and fashion. During her recent visit to Indiana University, filmmaker Deborah Riley Draper talked about the twelve African American models who, in 1973 put American ready-to-wear on the map, while exploding conventional standards of beauty–a story told in her documentary Versailles 73: American Runway Revolution (2012). Draper’s 2016 film Olympic Pride, American Prejudice (2016) revealed the story of the 18 African American student athletes who stared down Jim Crow and Hitler to compete in the 1936 Berlin Olympics.  Her visit to IU last fall came on the heels of a visit to the White House with the family members of the 1936 Olympians her film spotlighted.

And we pause to reflect on the words of Dr. Martin Luther King, Jr. on his birthday, with recent IU theater grad Ian Martin.

Titan Of The West: Dude Ranch Reveries And Everyday Life

Highlights from the Adams collection range from moonlit scenes at the dude ranch to everyday objects that tell the real stories of life out West.