Parents Who Rock, Putting Downtown Back In Film, And A Flashmob

Members of the St. Charles Parent Band resuscitate their musicianship among friends, a new history of downtown film...and get off your phone and dance! 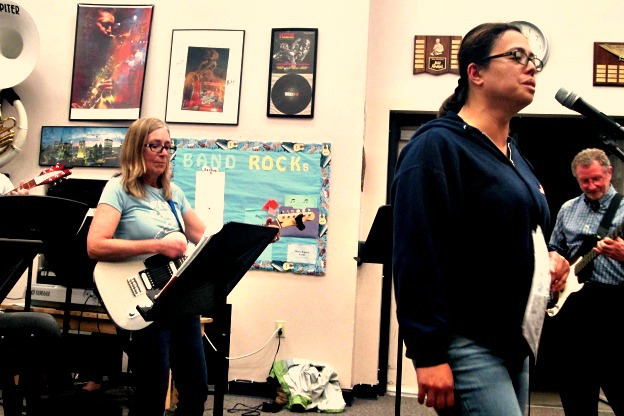 It's another Monday night rehearsal for the St. Charles Parent Band, an ensemble of amateur musicians many of whom, before playing together, had taken decades off.

There’s a general understanding in contemporary American culture about playing a musical instrument. You do it when you’re a kid. Whether you like it or not. You take some piano lessons or you sign up for band or you sing in the choir. Until you don’t have to anymore. Except for the really talented kids—they might go on to music school and pursue a life of concertizing. But in Bloomington, Indiana, home of one of the nation’s premier conservatories, some people making music are on an entirely different trajectory. They’re neither children, nor virtuosi, but every Monday night, they get together just a few blocks down the street from Indiana University’s Jacobs School of Music to pick up where they left off.

“I run an office for a local warehouse company. We service convenience stores, and trucks and commercial industry stuff. It’s maybe not as glamorous as this.”

By day, they work all over town, but Monday nights, the members of a local band let off steam and grow as musicians. The members of the St. Charles Parent Band aren’t trying to be rock stars. But the welcoming, unselfconscious culture of their enterprise allows them to nurture their musicianship.

“I’m not sure I’d be playing if it wasn’t such an easy entrance into a band. Where I didn’t feel like I was holding them back, holding them down, or getting in the way, and they were just patronizing me.”

We remain firmly planted outside the spotlight at the Café today, as we catch up on the downtown scene of the ’70s and ’80s with Joan Hawkins. A member of IU’s Media School faculty, Hawkins revisits the art-punk film movement that arose out of New York’s Lower East Side in the 1970s in her new book, Downtown Film and TV Culture 1975 through 2001.

And we send an audio postcard, from a seemingly spontaneous eruption of dance  on the Bloomington campus this week that IU Ballroom and Social Dance instructor Mary Hoedeman Coniaris designed to get students to look up from their screens.

If A Flash Mob Won’t Get Your Head Up, What Will?

Why broadcast a public service announcement when you can persuade 120 students to break into a dance designed to encourage folks to look up from their phones?