A painter of the down-and-out is on the up-and-up; Azerbaijani music is illuminated; and a panegyric to a pair of jeans. 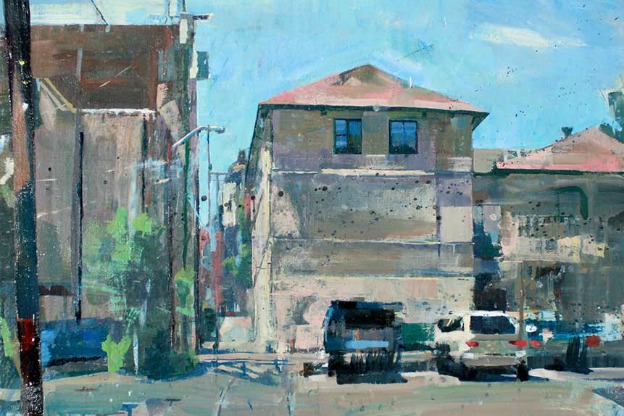 This was the original composition and I just turned around 180 degrees and painted what was behind me.

What do you make of a representational artist who doesn’t make intentional choices about subject matter? Today we discuss the significance–or lack thereof–of things and places with the award-winning painter Mark Ratzlaff. On the eve of his solo show at Bloomington’s Blueline Gallery, Ratzlaff shares how in painting visible reality he always hopes to transcend it–

When I don’t see it as that object anymore, but just see a color and a shape, and get lost in it.

But we won’t be getting lost in the history of Azerbaijani music now, with guidance from Aida Huseynova. We speak with the IU musicologist who in her new book charts the development of a little-known national art form from its roots to the modern era. In Music of Azerbaijan: From Mugham to Opera (Indiana University Press: 2016)Aida Huseynova takes us back to the improvisational tradition at the origins of Azerbaijani music, and weaves the tale of its evolution under the Soviet regime and beyond.

And we’ll salute a longtime figure on the local slam poetry scene, who performs a panegyric to a pair of jeans. The fall season of the 2016 Bloomington Poetry Slam series kicks off Friday, September 30 at the Bishop Bar.

Mark Ratzlaff has made paintings of possums and pizza boxes, but he's being hailed by the most staid arts organizations in Indiana. Does subject matter?