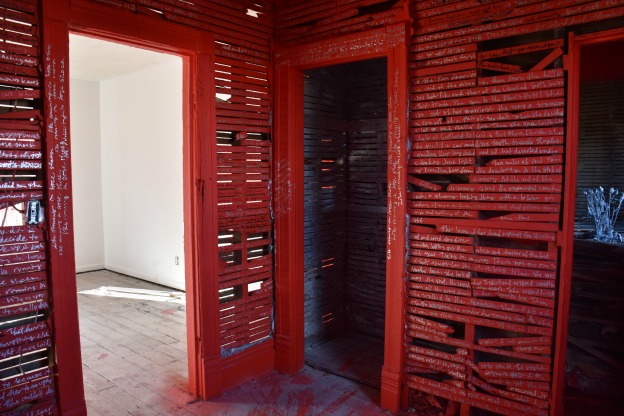 Amelia Volwiler-Stanley, installation view, Inside Outside

“One thing that any arts organization in the world is thinking about right now is the future–and future generations of attendees, of visitors. Because if we’re not thinking about that, then we’re going to die.”

We consider an established art institution today, and an emerging one. A name change and a $15 million gift kicked off IU’s Eskenazi Museum of Art‘s 75th birthday this year. It’s been an eventful start to David Brenneman’s tenure as director. Andrew Findley, Assistant Professor of Art History at Ivy Tech Community College, speaks with Brenneman, who came to IU in 2015.

The problem with contemporary art in our current moment is that art is just way too easy to ignore.There’s no reason that people have to pay attention to it.  It’s not normally part of a national conversation.  So, at least for two and a half weeks, in our city, we decided to make art impossible to ignore.  It permeates everything, and people are more or less forced to confront it.

Four graduate students from the sculpture program in Indiana University’s Department of Studio Art have been working all summer creating art works that are being installed in an abandoned house in Grand Rapids, Michigan. Inside Outside is a showcase of the work of Amelia Volwiler-Stanley, the team of Dan Woerner and Kate Burnet, James Kidd, and Matthew Falvey. They are four of the 1473 artists showing at 171 venues in Grand Rapids from September 21st through October 9th and competing for $500,000 at ArtPrize.  The sculptors discuss their collaboration for the extravaganza that The Art Newspaper has described as “the most attended public art event on the planet.”

And it’s Lotus weekend in Bloomington, so we’ll offer a taste of some of the world music festival’s highlights.  We’ve profiled several of the acts coming to the Lotus World Music and Art Festival this year—including Femina, Anna and Elizabeth, and Josienne Clarke and Ben Walker.

Before it is razed and reënvisioned, a derelict neighborhood in downtown Grand Rapids, Michigan is being occupied by IU MFAs competing in ArtPrize 2016.