The mark of the outsider has been co-opted by the mainstream, yet the art form evolves. Two shows at the Grunwald Gallery explore Indiana's tattoo history. 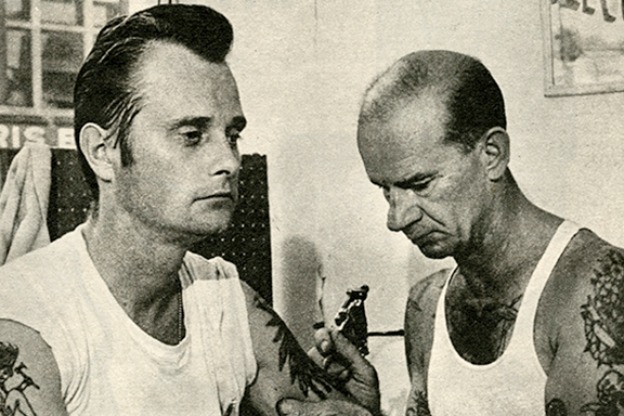 “She didn’t ask for my ID; she didn’t have an autoclave…
There were three dogs with mange in the living room; there were a bunch of bike riders watching TV in the living room…
I just remember it was going to be my secret rebellion; wasn’t going to tell anybody about it.”

Today at the Café, we explore Indiana’s tattoo history. Once upon a time in the US, only sailors and prisoners had tattoos. And as recently as twenty years ago, it was illegal for anyone without a medical license to give one in Indiana. The prohibition gave birth to a thriving outlaw culture.

These days, 40 per cent of Americans age 26 to 40 sport tattoos. But acceptance comes at a cost–

“I feel like it loses a little bit of its magic when a soccer mom will come in and boss me around because she wants to get an infinity symbol on her ankle, and she wants me to move it 15 times because she’s not even serious.”

The mark of the outsider has been co-opted by the mainstream, yet the art form evolves. A pair of exhibitions at Indiana University’s Grunwald Gallery document Indiana’s tattoo history in images and artifacts. The shows launched Hannah Boomershine into an investigation of how the art form has evolved, and what it represents for its devotés. Indiana Tattoo: History and Legacy and Welcome Back to the Badlands are on view at the Grunwald Gallery on the IU Bloomington campus through February 3, 2017.

“Normally I tap into this poster and t-shirt store iconography of James Dean and Jim Morrison. That kind of thing. I love images that everyone’s seen a million times.”

In what he calls his “photographic delusions” contemporary artist Vik Muniz traffics in readily known visual imagery to challenge viewers’ perceptions. The Brazilian-born artist creates three-dimensional sculptures from unconventional materials that he then photographs; the images seem to represent famous people places, and artworks. Andrew Findley spoke with Vik Muniz when he was on the IU campus for the opening of his mid-career retrospective at the Eskenazi Museum of Art.

An “Art-Side Chat” inside the Vik Muniz show at the Eskenazi Museum takes place Thursday, Februrary 2nd at 6 pm. The show continues until February 5th. You may listen to a longer conversation with Vik Muniz here.

From Outlaw To Upright: Getting Inked In Indiana

An exhibition at the Grunwald Gallery of Art explores the power of tattoos to delight, push back, and heal.