T.C. Steele's dedication to the Hoosier landscape, on view in landmark show. Plus, celebrating free expression on the Fourth, and looking ahead to Lotus 2016. 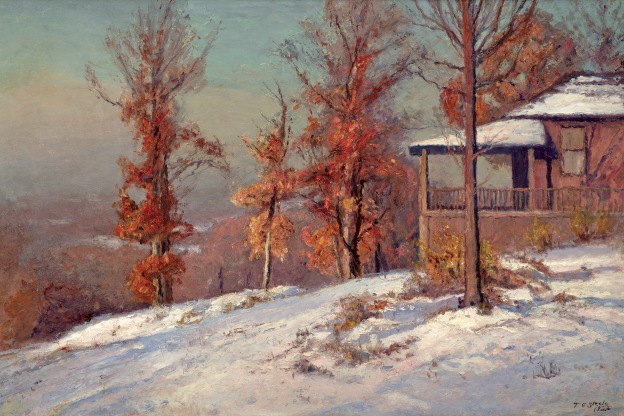 The painter T.C. (Theodore Clement) Steele (1847-1926) put Indiana on the art world’s map back in the 1890s. Having made waves in Chicago and Paris, and painted the portrait of every Hoosier luminary, Steele spent his golden years in Brown County, painting his environs from observation in all seasons.

He came to Brown County and just painted what he wanted to paint. He doesn’t necessarily feel that every painting has to be a masterpiece. He still had to make a living, but I still think he was pretty liberated in his attitude toward what people would buy. Sometimes he’s attracted to something as simple as the way the light is in the tops of the trees on an October morning. And that’s what he tries to paint.

We visit a large exhibition of rarely seen, privately owned Steele paintings at the Indiana Historical Society, curated by Rachel Berenson Perry. Indiana Impressions: The Art of T.C. Steele is the first solo show of Steele’s work in an Indianapolis museum since 1926, the year of his death.

From Brown County of a century ago we jet off to catch the latest sounds from around the world. Though the Lotus World Music and Arts Festival won’t happen till September, the line-up was just announced. So we’ve invited director Sunni Fass to fill us in on some of the exciting acts coming to Indiana this fall.

But this weekend, Café Indiana is hosting a celebration of Independence Day. It’s an observance marked in our culture by everything from traditional displays of patriotism to outrageous explorations of the freedom of speech. Bloomington’s Fourth of July parade includes some of each. We get to know the man behind one of the parade’s wackiest, and most enduring floats.

The first solo museum show of T.C. Steele's paintings in Indianapolis since his death in 1926 asserts the artist's devotion to his native surroundings.

For 19 years, one float in Bloomington's Fourth-of-July parade has stood apart from the others. Andy Cambridge is at the heart of the befuddling Beanpole.