Different Drummers, And The March Toward The National Book Award

Bloomington has been the cradle of rock stars and obscure bands alike. We follow two different drummers' trajectories and salute one man's "March." 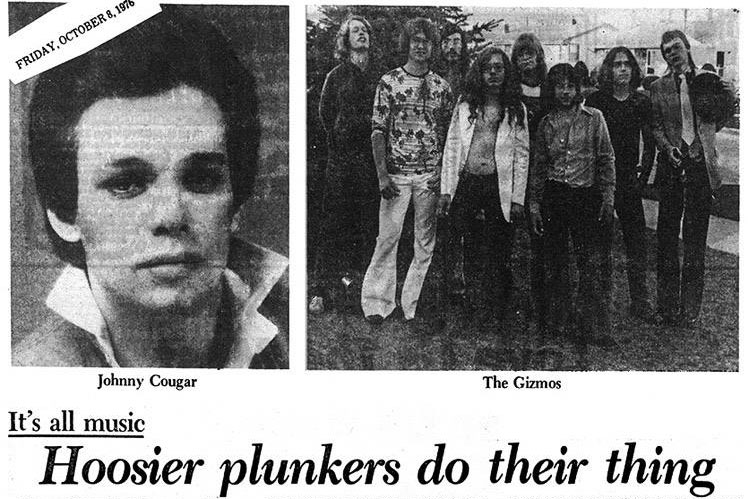 A 1976 article from the Bloomington Herald Telephone hearkens back to a moment when heartland rocker John "Cougar" Mellencamp and Hoosier punk rock outfit the Gizmos flourished within the same milieu.

It was just a pop song. But for the drummer, the stakes were high.

“I was fighting for my life,” Kenny Aronoff admits.

He had already been fired from John Mellencamp’s band once, and this session wasn’t going all that well.

“Two guys had been fired already on that record and John and I had gone almost fist to fist,” he recalls. “And now next thing I know I’m walking back to the drum set and saying, you’ve got 25 feet to save your career.”

Sealing the deal with Mellencamp with that legendary drum solo, and eventually recording and touring with everyone from Bob Dylan to B.B. King, Kenny Aronoff made Bloomington his home base for more than 30 years.

At the same time, another Bloomington drummer has kept the beat of the local music scene going. Best known as the longtime music director of community radio station WFHB, Jim Manion has been on the scene since 1972, recording and writing about local music, booking shows, and providing the back beat for at least 15 bands. He traces Bloomington music history from Hoagy Carmichael through Gilfoy Studios, pioneering punk band The Gizmos and the Second Story nightclub, to today’s basement shows.

“There’s been this continuity of fierce independence here in Bloomington,” Manion asserts, “and yes, there’s financial potential in putting out your music, but the way I look at it is that the best music in this town really comes from people making music for the sake of making music and the community that comes from playing music together. There really is this continuity of creativity here.  It’s in the water or something–in the limestone.”

And we congratulate Nate Powell, the co-author of March: Book Three. On November 16th, 2016, the graphic memoir won the National Book Award for young people’s literature.

Kenny Aronoff: His Life Was Saved By Rock And Roll

Risking it all for rock and roll, drumming legend Kenny Aronoff quit the classical route to find that, suddenly, he had only "25 feet to save [his] career."

A Civil Rights Primer Marches Forth

March: Books One and Two are on the curriculum of schools in over 40 states. Nate Powell discusses portraying the life of legendary Congressman John Lewis.