For nine decades and across continents, making art has defined Annemarie Mahler's sense of self. Plus visits from the Verona Quartet and Russian folk virtuosi. 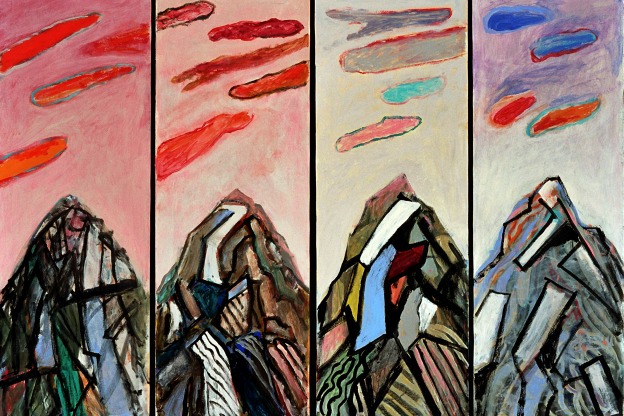 “One day somebody handed me a piece of paper and a pencil and I made a drawing, and (one maid) Frieda called to (the other one), Klara, ‘Schau was das Kind kann!’—’Look what the child can do!’ That’s when I became a human being. Suddenly I was not just ‘das Kind.’ I was Annemarie Ettinger. And all my life I have wanted to remain a human being and that’s the way I know how to do that. I draw, I paint, I also write. I make things and then I count.” —Annemarie Mahler-Ettinger

Annemarie Mahler-Ettinger’s canvases chronicle a life spent around the world, but paint the portrait of an enduring spirit. A conversation with the artist, whose paintings are currently on view at the Blueline Gallery in Bloomington, and whose life is the subject of the documentary Whatever Comes Next, being shown Friday, July 29th as part of the Middle Coast Film Festival.

And we played host to two very different ensembles in the WFIU studios this month.  First, it’s the Verona Quartet, whose members first met at IU’s Jacobs School of Music as graduate string players.   Now they’re the quartet in residence at Juilliard and touring the world.  And it’s a Balalaika-pa-looza! We’ll have a preview of a performance by the 80-piece Russian Festival Orchestra taking place at the Buskirk Chumley Theatre Saturday night, July 23rd.

Painting At The Core, Across Decades And Continents

Regardless of the vagaries of time and place--no matter how dramatic--Annemarie Mahler-Ettinger identifies with the art she has made since the age of three.

The Balalaika and Domra Association of America in Concert

Music from Balalaika Fantasy, a Russian Two-Step and Uvalskaya Plesovaya