Thoughts In Solitude: Alone In A Cave, On Stage, Or The Page

Osamu James Nakagawa shoots in the dark of Okinawan caves, Vincent Desjardins draws his own world, and Diane Kondrat holds her own in Cardinal's "Ann." 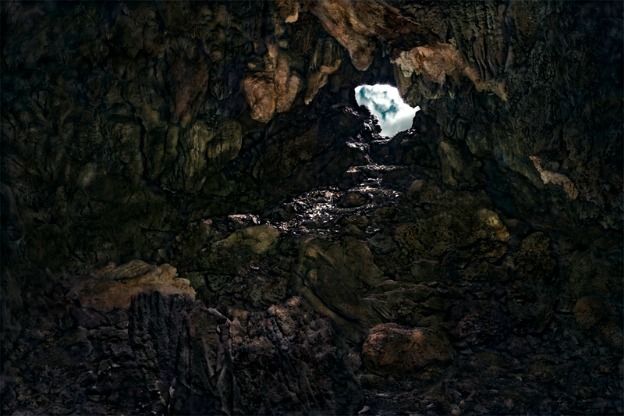 “You know, it kind of goes back to when I was a kid, when I wanted to be an animator. I was always very shy, a bit of a loner, so I thought, if I could get into animation that’s something I could do, on my own.  And drawing is the same thing.  You can kind of create your own world.  Anything that you can imagine–if you can get it down  on paper, you can create this world on paper, bringing things in your imagination to life.”

Although it’s ultimately a means of expression, art-making is often a solitary task.  That job description can serve as an inducement for an introvert, but also poses challenges.  Bloomington-based Vincent Desjardins relished the refuge that drawing provided as a shy kid growing up in Southern California. He grew up dreaming of being an animator for Disney in the hopes of being able to work alone in a world of his own making.  More recently that dream has been realized in the pages of the children’s books he’s illustrated.   Desjardin’s most recent  illustrations appear in the children’s book Mercy: The Incredible Story of Henry Bergh, Founder of the ASPCA and Friend to Animals (Houghton Mifflin Harcourt, 2016) by Nancy Furstinger.

“What we call in theater ‘keeping something active’ is more difficult when you’re alone on stage.  When you have another actor with you, the energy just naturally bounces back and forth.   When you’re alone on stage it’s more challenging to make sure that the play stays a play and isn’t a speech.  Because a speech is a different thing–a speech is shaking a finger, ‘I’m telling you this.’   When what we’re looking for in theater is a shared experience of communication.”

A longtime fixture of the Bloomington theatre scene is currently creating a whole world by herself on stage. And it has its challenges–speaking to people who aren’t there is only the beginning. Holland Taylor’s Ann is Diane Kondrat’s second one-woman show for the Cardinal Stage Company. During her 27 years in Bloomington, Kondrat ran two theatre companies—Oasis, which featured “small cast shows with great roles for women,” and Interaction Theatre, which staged plays in prisons and educational settings. WFIU’s George Walker spoke with Kondrat about coming back to play Texas Governor Ann Richards.  Ann runs September 1st through the 9th at the Ivy Tech John Waldron Arts Center, in Bloomington.

“I felt a similar sense of not belonging to anywhere–Okinawans, yes they’re affiliated with Japanese but not quite– they have their own identity.  So I kind of sensed this ambivalent, in-between identity of the Okinawan people,  and then I felt compelled to visualize from my own sense of in-between.”

In order to photograph the Okinawan caves where many thousands of civilians committed suicide during World War 2,  Osamu James Nakagawa had to keep the aperture of his camera open while wearing a headlamp to “paint” light across the cave’s interior. And that was just the technical part.  In fact, being alone inside the caves–long considered sacred spaces in Okinawan culture–was also an opportunity to explore his own interiority.

Nakagawa is an internationally exhibiting photographer and professor at Indiana University, Bloomington, who has been honored with a Guggenheim Fellowship and a Higashikawa New Photographer Award in Japan. Nakagawa’s photographs belong to the collections of the Metropolitan Museum of Art in New York, the Tokyo Metropolitan Museum of Photography, and the George Eastman House, and are on view through October 6th, 2016 in the show “Framing Beauty”, at the Grunwald Gallery of Art on the IU-Bloomington campus.