Nancy Hiller's new book of tales comes with a warning for "sailor language" and features talking parrots but started as a philosophical treatise. 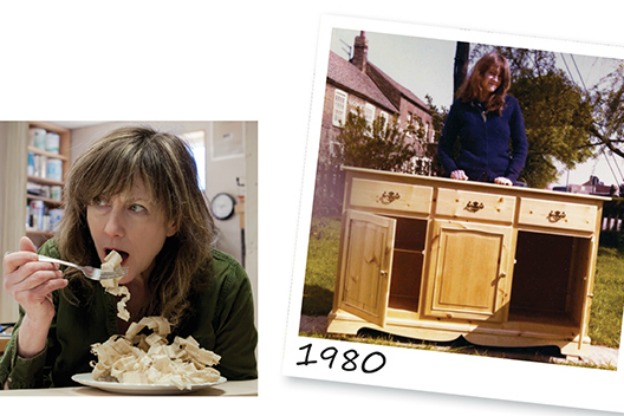 Nancy Hiller, Then And Now

A comment someone made to Nancy Hiller once really stuck in her craw.

“I understand your work is very good,” this upstanding community member said upon meeting the cabinetmaker, “but not very cheap!”

The fact that someone could make a remark like that with a straight face struck her as “pretty goofy, if you think about it, and that’s a polite word!”

Polite words fell away as Hiller started writing a book about her life making custom cabinets for a wide cast of characters.

“One day,” she recalls, “while I was working at a particularly challenging job, I started to realize that the events that were unfolding were beginning to strike me as so absurd that the only way I was going to get through the job was by making notes and thinking about the humor in the absurdity.”

[pullquote source=””]”Frankly, whenever I see people refer to this book as a memoir I feel a little embarrassed, because I am not the sort of person who thinks she is worthy of writing a memoir.”[/pullquote]

The result: Making Things Work, Tales From A Cabinetmaker’s Life (2017).  A designer and builder of furniture and cabinetry with such traditional details as hand-cut dovetails and hand-turned cabinet pulls, Hiller trained in England, where she lived from age 12 to 28. Having founded NR Hiller Design in Bloomington in 1995, Hiller’s work has been featured in such magazines as Fine Woodworking, Old-House Interiors, American Bungalow, and Arts & Crafts Homes.

When she’s not in the wood shop, Hiller writes. Previously, Hiller has written a history of the Hoosier Cabinet—that stalwart fixture of the American kitchen—and is currently writing a study of English Arts and Crafts furniture. Her 2011 book A Home of Her Own shares the stories of women who have expressed themselves, healed, and grown in the process of maintaining or restoring their homes. In her most recent writerly foray, Hiller turns her focus inward. Making Things Work is a collection of autobiographical stories from her professional life, inlaid with plenty of personal life. Just don’t call it a memoir.

“I did not set out to write a memoir,” Hiller insists, “and frankly, whenever I see people refer to this book as a memoir I feel a little embarrassed because I am not the sort of person who thinks she is worthy of writing a memoir.”

In fact, Hiller wanted to write a philosophical treatise.

“The book started out as a very serious exposition of the kinds of things that go into making objects that we use every day,” Hiller explains, “and we take for granted.”