An homage to Sandy Wood Taylor, who cut a broad swath through the arts. Plus, visits from the Grammy-winning King's Singers and a documentary filmmaker. 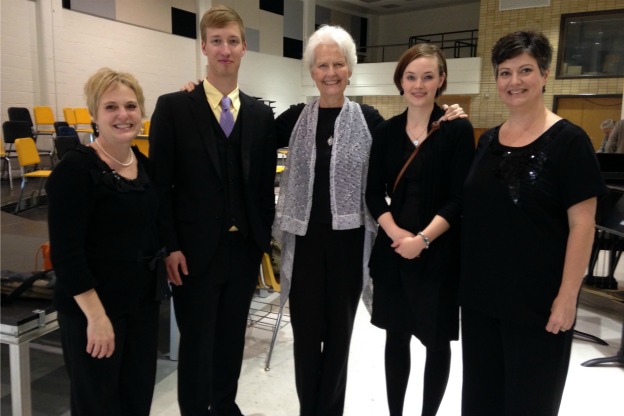 Sandy Wood Taylor (center) poses with the graduate students at Wichita State University who performed her composition "Concurrence" in 2015.

Today at the café we celebrate the life of the late Sandy Wood Taylor (1937-2016), an accomplished musician, visual artist, and leader in the Bloomington arts scene who passed away in late April. We’ve gathered friends, colleagues, a family member, and her surprising protégé at the café to remember Sandy during her birthday week.

We’ve also invited a member of the long-touring British men’s chorus The King’s Singers in for a chat. George Walker speaks with Christopher Brewerton of the multi-Grammy-award-winning ensemble in anticipation of tonight’s performance in Columbus, Indiana.

And we kick off the show with a conversation with documentary filmmaker Tony Buba.

“What I try to do is show the micro to show the macro. Looking for people who might be overlooked, but their story is very important in understanding the story of de-industrialization and inequality. Where instead of focusing on a name person, a politician, you look at someone who’s working as a roofer. So I’m looking at people who are affected by that who keep fighting it.”

Buba has spent nearly his entire career documenting the economic decline of the small steel town he comes from–Braddock, Pennsylvania. Buba stopped by WFIU last fall while visiting the IU Cinema to discuss his film-making career .

It's the rare artist who maintains a serious stake in visual arts and music. Family, friends, colleagues, and a suprising protege remember Sandy Wood Taylor.

The King’s Singers In Columbus

"A Dream of singing and traveling became a reality." Chris Bruerton, King's Singer since 2012