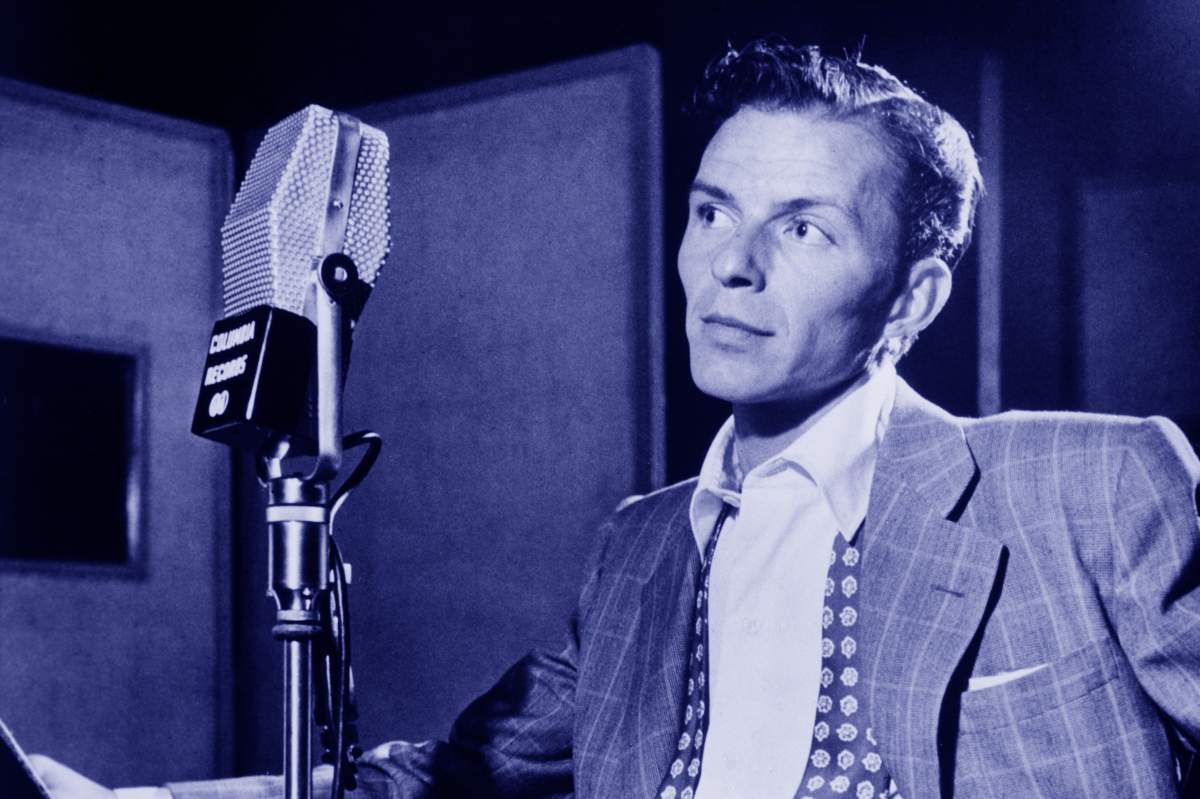 December 12, 2015 marks 100 years since the birth of Frank Sinatra. To commemorate Sinatra's centennial, on this program we're looking back on Sinatra's first five years as a recording artist, from the end of the 1930s through World War II. Along the way, we'll encounter the individuals who helped shape his early career: bandleaders Harry James and Tommy Dorsey, and arranger Axel Stordahl, who he worked with at Columbia records.

Frank Sinatra grew up in Hoboken, New Jersey, under the protective gaze of his mother Molly. A hard-nosed woman, Molly's political clout in the area would help secure the young Frank his first professional gig: a spot in the local singing group the The Three Flashes (now renamed the Hoboken Four with the additional of teenage Frankie). With the rail-thin, blue-eyed heartthrob now singing lead, the Hoboken Four found success on Major Bowes Amateur Hour radio program, and later on Bowes travelling circuit. But even then Sinatra knew he was destined for better things.

Determined, Sinatra soon landed job as a singing waiter in the Rustic Cabin, a club in Englewood Cliffs, New Jersey. The Cabin possessed a special feature: a direct line to WNEW, a local radio station that would broadcast their performances. It was on one of these broadcasts where he was first heard by the young trumpeter and bandleader Harry James.

All Or Nothing At All

James knew right away that he wanted Frank in his band. Sinatra's voice was still thin and tender at the time. But with his Italian heritage and lingering Hoboken accent, it was considered a bit exotic, at least compared to the All-American sound of Sinatra's idol Bing Crosby. Sinatra recorded 10 songs with Harry James's orchestra, before moving on to bigger and better things. But, one of those songs, "All or Nothing at All," stood out among the rest, and would prove to be Sinatra's first big hit in 1939. (It would become a hit again in 1942, when Columbia Records re-released it during the recording ban.)

The song would also provide Sinatra with his next big break. In December of that year, bandleader Tommy Dorsey heard this song on the radio, and shortly after Sinatra's 24th birthday, he was auditioning with Tommy Dorsey's Orchestra.

The trombonist Dorsey was different than the freewheeling trumpeter James in almost every way. James was younger than Sinatra, just getting his band off the ground when Sinatra joined. By this point, Dorsey, "The Old Man" as they called him, was already an established pro, and a notoriously unsentimental taskmaster, despite his ironic nickname "The Sentimental Gentleman of Swing." Sinatra thankfully nailed the audition, and it's a good thing. Just six months earlier, Dorsey was in the audience where Sinatra was singing, and the singer literally froze on stage, mouth agape with no sound coming out.

He said his farewell to James, and early in 1940, began his tenure with Dorsey. Dorsey's established brand helped elevate Sinatra's status over the next two years. By April of 1940, he had his first charting single, the song "Polka Dots and Moonbeams," written by his old pal from the 1930s, Jimmy Van Heusen.

In 1940, Sinatra recorded the song "I'll Never Smile Again" with the Tommy Dorsey Orchestra and the vocal group the Pied Pipers (which featured a young Jo Stafford among its ranks). In July of that year, Billboard magazine decided to to release a brand new chart of the top songs in the country based on sales and radio play. "I'll Never Smile Again" topped this very first Billboard chart, a position it held for the next twelve weeks. This success helped make Frank Sinatra a household name in America, especially to groups of bobbysocks-wearing teenage girls.

By the end of 1940, it was clear that the draw of Tommy Dorsey's band was now Frank Sinatra, and the Old Man, began to realize it himself.

Throughout 1941, Sinatra's star continued to rise, so did his desire to branch out on his own. He was having trouble sharing the limelight with Dorsey's other stars, notably the hotshot drummer Buddy Rich. Around the same time, Columbia Records Manny Sachs had convinced Sinatra he could have a successful solo career, just like his idol Bing Crosby. Not wanting to lose an opportunity to another singer like Perry Como or Bob Eberly, Sinatra had an idea.

Early in 1942, Sinatra decided to give Dorsey his notice: he was going to try his hand at a solo career. But leaving Dorsey's band was going to be no easy feat. Sinatra once said that there were two people in this world that he feared: his mother Dolly, and Tommy Dorsey. Contract negotiations were difficult. Dorsey threatened to claim a third of Sinatra's future earnings, and depending on who you ask, Sinatra may have threatened Dorsey with some help from the mob.

But by September of 1942, Sinatra was free. In the farewell broadcast from September 3rd of that year, Dorsey wishes him well from the stage. But backstage, that was a different story. Dorsey's final words to Sinatra's weren't so kind, saying "I hope he falls on his ass."

At age 26, Sinatra had just left Tommy Dorsey's orchestra to make his way as a solo singer. It was unprecedented territory for a big band singer, but luckily Sinatra had the support of legions of teenage girls. Plus, he had another trick up his sleeve, a man by the name of Axel Stordahl.

Stordahl, who Sinatra nicknamed "Sibelius," started out as a mediocre trumpeter in Dorsey's band. But his true talent was in the art of arranging, particularly the artful ballads with lush, orchestral strings that Sinatra loved to sing.

Sinatra brokered a deal with Stordahl to join him as soon as he left Dorsey's orchestra. By that point, the duo â€“ Sinatra and Stordahl - were already a proven commodity. In January 1942, 8 months before Sinatra's official departure, Sinatra and Stordahl recorded four songs on their own. It was a trial run of Sinatra the solo star, and it paid off. One of those songs, "Night and Day," became a hit single on the Bluebird label, a subsidiary of Tommy Dorsey's label RCA. This was proof enough to Sinatra that he and Axel Stordahl were a winning combination.

When Frank Sinatra decided to branch out on his own, his destination was Columbia records, with the help of record exec Manny Sachs. It was a bold move-bandleaders were typically the biggest draw in the early 1940s. But a successful run at New York's Paramount Theatre at the end of 1942 proved to Columbia that the singer was ready.

There was a problem though. A musician's strike at the end of 1942 meant that there was a recording ban for records featuring unioned instrumentalists. Columbia had a way to circumvent this: Sinatra's first sessions would be a capella, with choral accompaniment featuring the Bobby Tucker singers, and arranged by Alec Wilder. This session produced eight songs, including the standout song "Close To You."

Despite the recording ban, Sinatra was very active in 1943 and 1944. He starred in several feature films, signed a movie contract with RKO, hosted a radio program, performed in prestigious venues like the Hollywood Bowl, and was still selling records. It wasn't until November of 1944 that Sinatra began to record with an orchestra again.

The Voice of Frank Sinatra

Sinatra's signature become the slow ballad, love songs that could make the young women swoon. And the key of course were the artful arrangements by Axel Stordahl, who orchestrated primarily for strings and woodwinds, rather than the heavy reliance on horns heard in most swing bands at the time. Songs like "If You Are But a Dream" from November of 1944, or "I Fall in Love too Easily" from December are classic examples of this Sinatra-Stordahl ballad from these years.

The Stordahl sound dominated the early Columbia years for Sinatra. That confident swing and swagger that many of us associate with Sinatra didn't come about until the 1950s when he worked with arrangers Nelson Riddle and Billy May. However, that didn't mean Sinatra still wasn't swinging. In November 1944, the same session that produced "If You Are But a Dream," Sinatra recorded the new Jule Styne and Sammy Cahn tune "Saturday Night (is the loneliest night of the week)," which swings as hard as any of his maturer works from the 1950s. The arrangement came not from Stordahl, but rather George Siravo. Evidently, Sinatra, who was primarily a ballad singer at this point, needed convincing that he could pull a swinging number like this off.

At the end of 1945, Sinatra and Stordahl collaborated on an entire album, one of the first of its kind. This album, released on four 78s and titled The Voice of Frank Sinatra showcased the tender Sinatra-Stordahl ballad, and would become a precursor for his later concept albums on Capitol Records in the 1950s, like In the Wee Small Hours and Sings Only the Lonely. This album was later released as an LP in 1948, earning the distinction of becoming the very first pop long-playing record.