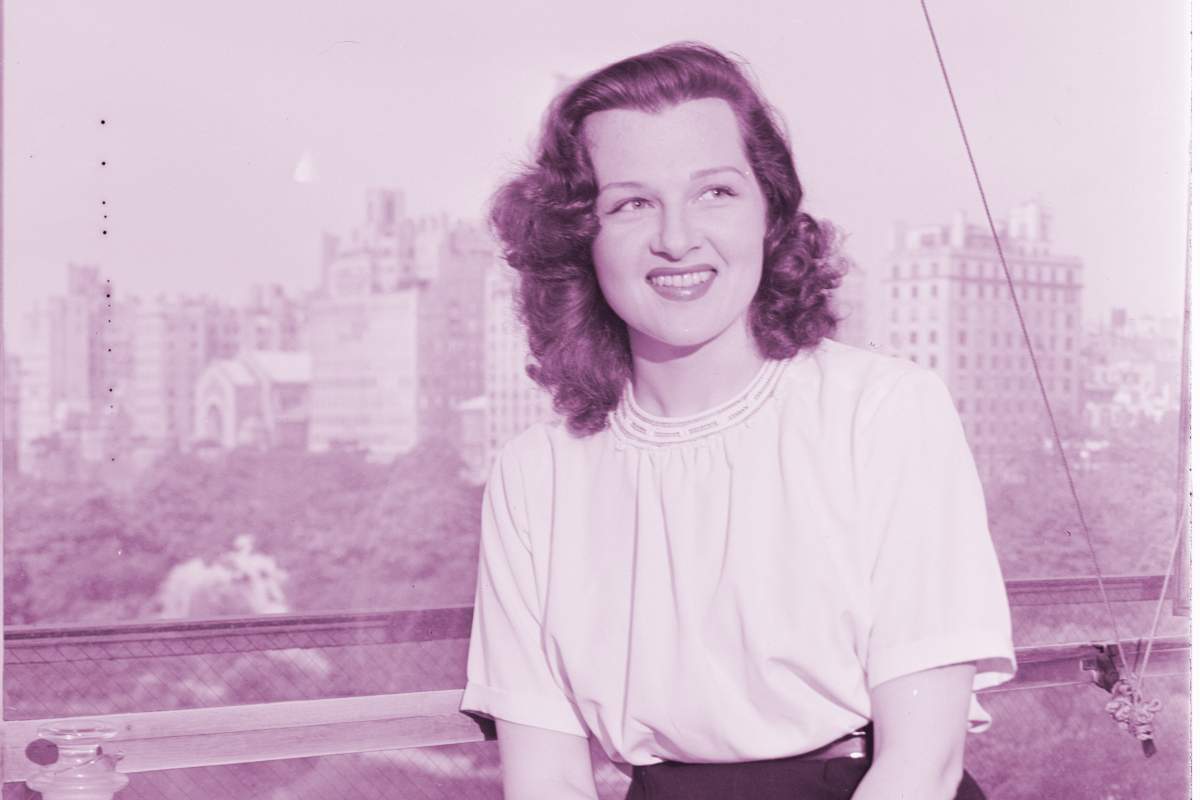 This week, our spotlight is on one of the finest and most underrated female vocalists from the war years, Jo Stafford*. Stafford had one of the purest, warmest vocal sounds of any of the great songbook singers, and her repertoire extended from standards, to bebop, to even American folk music.

Stafford had the style of a cool jazz singer in the generation before those kinds of singers existed. She started as a big band vocalist, and then turned into a solo balladeer. But unlike some other vocalists from her era, Stafford never added any artifice to her voice. She wasn't a personality, which might be why she's less iconic today. She didn't heighten her girlish charm like Doris Day, nor did she ramp up her sultriness like Peggy Lee. Instead, Jo Stafford just sang, clearly and directly, and she did better than just about anyone else.

As cool and unaffected as she seemed behind the microphone, Jo Stafford also had a wry sense of humor that was mostly out of the spotlight. This comedic personality of her did emerge on occasion, and we have evidence of it in some novelty records she recorded in cognito.

This hour, I'll chronicle her career.

The Pied PipersÂ and Tommy Dorsey

Jo Stafford, born November 12, 1917 in California, got her start as the youngest sister of the Stafford Sisters, a girl group in the model of the Boswell Sisters or the King Sisters. The group didn't last long-Jo was the only sister who wanted to pursue a career in singing. So eventually she joined forces with two other singing groups to form the ensemble The Pied Pipers.

The Pied Pipers were originally an octet, but then reduced to a quartet with Stafford as the only female. They were soon discovered by Tommy Dorsey and one of his arrangers Paul Weston in the late 1930s. In 1939, Dorsey hired the Pied Pipers to backup his budding lead singer at the time, a guy by the name of Frank Sinatra. By 1940, Sinatra and the Pied Pipers, led by Jo Stafford's beautiful soprano voice, became sensations.Â Their song "I'll Never Smile Again," recordedÂ in May of 1940 holds the distinction of being the very first number-one single ever issued by Billboard magazine.

By 1941, Stafford had proven her talent within the Dorsey organization so much so that Dorsey gave her the opportunity to sing her own song solo, eclipsing the other female singer Connie Haines. The song was "Little Man With A Candy Cigar," and it started her solo career. Over the next year and half, Stafford was the lead vocalist on more than a dozen songs with Dorsey's Orchestra.

In 1942, a few months after Frank Sinatra left Dorsey's Orchestra to pursue a solo career, the Pied Pipers also parted ways with Dorsey to make it on their own. About a year earlier, Stafford and the Pied Pipers had met the singer-songwriter Johnny Mercer, who promised them that whenever he started his own record label, he would not only sign the group, but also sign Jo as a solo artist. By the time the Pipers left Dorsey's orchestra, Mercer had co-founded Capitol Records, and made good on his promise. The Pied Pipers and Jo Stafford were among the first artists signed.

It became clear early on that Jo Stafford was bigger than the Pied Pipers. She left the group to go solo full time. She quickly became one of the biggest music stars from the war years, earning the nickname "G.I. Jo." Between 1943 and 1950, she recorded 48 hits for Capitol, making her the biggest star on the label, even bigger than the president himself Johnny Mercer.

In the 1940s, Jo Stafford showcased her range by recording not just pop songs, but spirituals, folk songs, comedy songs, and even bebop numbers. At the same time she was becoming a star in the pop market, she was also becoming a star in a completely different market. She started recording spirituals, making her a star in the mostly southern, religious section of American society. One of these spiritual hits was the gospel tune "Whispering Hope" which she sang with singer and actorÂ Gordon MacRae.

But the same year she was recording this, 1949, she was also becoming a pioneering voice in bebop jazz. Stafford recorded a wordless scat tune with the Dave Lambert singers called "(M + H + R x 3ee - 00)/(4/4aa^3) x 32 = Bop" (it also went by the more sensible name "Jolly Jo"). Stafford proved herself to be a chameleon who could slide into any genre that Capitol Records put in front of her.

In 1948, Stafford also recorded an album of traditional American Folk Songs like "Wayfaring Stranger" and "Barbara Allen." These were songs that most big-name pop artists wouldn't touch. The album was calledÂ American Folk Songs,Â and featured Copland-esque arrangements by her music director Paul Weston. ItÂ became a surprise hit for Stafford that year,Â influencing the next generation of folk musicians like folk singer Judy Collins.Â She and Paul Weston's Orchestra even re-recorded it in 1962, in the middle of the folk revival movement.

By 1950, Stafford's time at Capitol Records had come to a close, and she and her music director Paul Weston made the move to Columbia Records. Two years later, Stafford and Weston-who had worked together since the early 1940s with Tommy Dorsey's orchestra-were married. They remained together as both musical and life partners until his death in 1996.

Stafford and Weston spent the next decade recording for Columbia-she would more or less go into retirement by the 1960s. Stafford made occasional appearances on television and radio, but she was most at ease in the recording studio. Like she did for Capitol, Stafford exercised her versatility on Columbia by recording jazz tunes, pop tunes, country songs, gospel and religious numbers, Scottish folk songs, Christmas songs, Broadway hits, and blues.

SheÂ had been a fixture on the pop charts in the 1940s, and it was no different in the 1950s. In fact, her biggest selling single came in 1952, the sentimental song by the female songwriter Chilton Price called "You Belong To Me." It was a huge hit in 1952, and Weston's arrangement does everything all at once: it has elements of jazz, pop, swing, R&B, and even a little bit of country.

Her versatility led her to jazz, too. Stafford was never really a "jazz singer," per se, at least not like Ella Fitzgerald or Sarah Vaughan. But she was so skilled and versatile, that when she had to wear that hat, she did it easily and confidently. In 1960, she recorded the albumÂ Jo + Jazz, which showcased her jazz side. This album is one of the finest jazz records from 1960, and notable too because of the number of skilled sidemen who play with her, including Duke Ellington's band members like saxophonists Ben Webster and Johnny Hodges, and trumpeter Ray Nance.

One of the more remarkable aspects of Jo Stafford's performing career was her work in comedy. As I've said before, Stafford was a blank slate as a singer, who could transform her voice to fit in any style. However, when she wanted to inject a little humor into her music, Stafford felt it necessary to assume a different identity.

Her first assumed identity for the sake of comedy came in 1940 as the hillbilly singer Cinderella G. Stump. The story goes that Capitol recording artist Red Ingle, a comedic country singer that recorded with Spike Jones, was making a novelty version of the pop standard "Temptation," which he country-fied to "Tim-Tay-Shun."

When his girl singer never showed up to the session, Jo Stafford (who also worked for Capitol) stepped in at the last second. She sang the tune with a fairly convincing country accent, but didn't want credit. So she gave herself the pseudonym of Cinderella G. Stump. When word got out that it was really Jo Stafford singing, "Tim-Tay-Shun" became an even bigger hit.

Stafford's other foray into comedy came in the late 1950s, and also under an assumed name. The story behind this creation goes that Stafford and her husband Paul Weston were growing tired of the awful music that Columbia music director Mitch Miller was bringing them. So to parody it, they adopted the alter egos of Jonathan and Darlene Edwards, two high-society performers, who were also terrible musicians.

Weston and Stafford (aka "Mr. and Mrs. Edwards") took their act to Hollywood parties, performing standards out of tune and in poor taste, in only a way two actual incredible musicians could. Eventually, Jonathan and Darlene recorded their act, and even won the Grammy Award for best comedy album. For a singer who was almost incapable of singing a wrong note, there's irony in the fact that Jo Stafford's only Grammy came from when she was purposefully singing poorly.