Voices On The Air: Bing & Frank 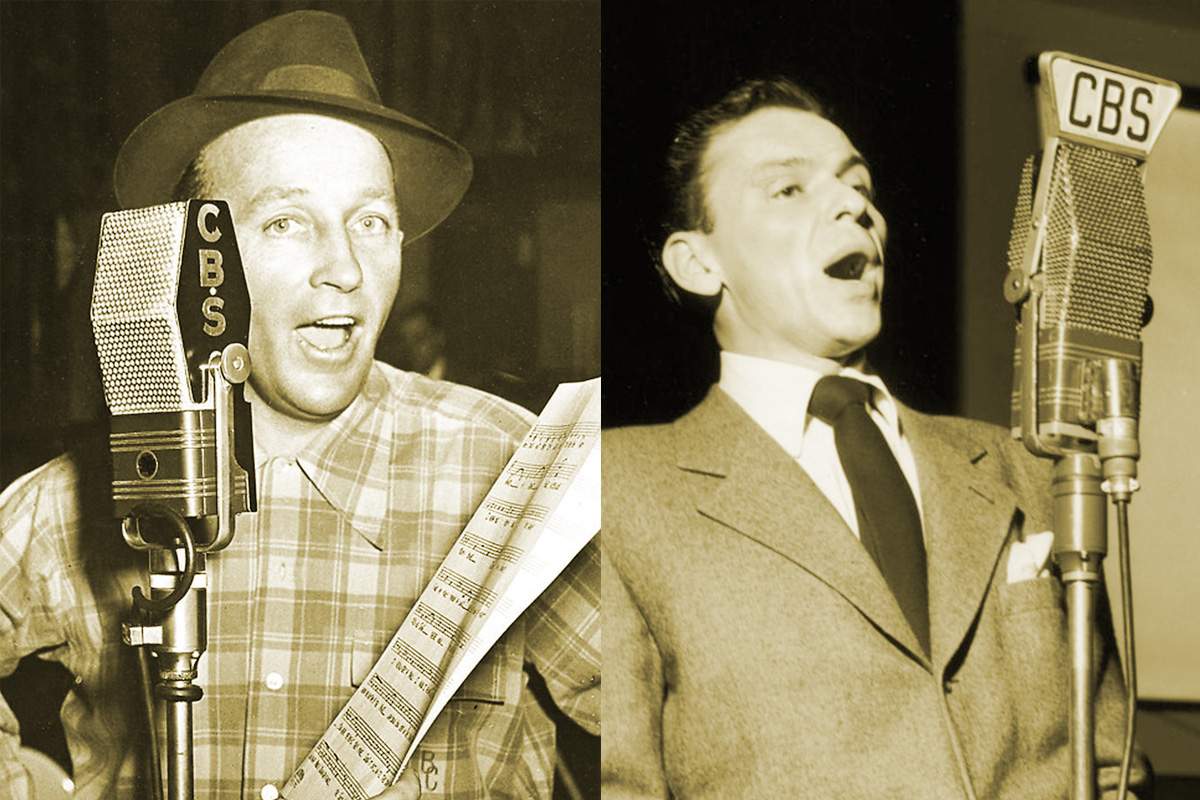 For nearly 30 years when radio was king, two singers dominated the airwaves more than anyone else: Bing Crosby and Frank Sinatra. Both were pioneers of the medium-Bing just a few years ahead of Frank-and masters behind the microphone, able to translate the warmth and tenderness over the air like no other singer had done before. This week, I'll be featuring both Crosby and Sinatra in the way they were featured to millions of Americans in the 20th century, through their live radio broadcasts.

Bing Crosby, The Voice Of America

Bing Crosby was a triple threat: a star on film, a star of recorded music, and America's first radio superstar. He was a major radio star longer than almost any performer: over 20 years (plus an extra decade in syndication), appearing on over 4,000 radio broadcasts.Â More than anyone before him, Bing understood how to work the microphone, a brand new invention at that point, meaning he could be tender, light, and subtle in his delivery. There was no need to sing to the back of the house anymore, instead he could sing right into people's living rooms.

Crosby's first big break came in the late 1920s, when he and his group the Rhythm Boys, new to Los Angeles, were hired by Paul Whiteman, one of the biggest jazz acts in show business. Bing's first appearance on the radio was singing "Ol Man River" with Whiteman, a song which he later recorded (although he wasn't credited on that original broadcast).

Bing was charming and affable, and had a broad base of appeal. He was heard as a comforting and comfortable presence on the air, with an easy, wholesome charm that played to all different demographics (as opposed to Frank Sinatra, whose appeal was almost entirely in the youth market for most of the 1940s). By 1931, Bing became a solo artist and was signed to his first starring radio program: 15 minutes a day, 6 days a week, three songs, no talking.

His star rose quickly, and by 1936, he ended up taking over the popular Kraft Music Hall radio program, a show once hosted by his former boss Paul Whiteman. Crosby stayed on as host of theÂ Kraft Music HallÂ for ten years, accompanied reliably by the John Scott Trotter orchestra the entire time. Because of a contract dispute, Bing's time hosting the Kraft Music Hall came to an end in 1946.

By this time, Bing was used to the recording studio and was convinced that recording radio programs on tape, instead of broadcasting them live, was the next big thing. NBC and Kraft preferred the spontaneity of the live broadcast, so Bing left NBC to star in Philco Radio Time, a prerecorded broadcast he made for competitors NBC. Prerecorded radio is a convenience, and it makes for a more polished product in the end. We have Bing Crosby to thank from that daring innovation over 70 years ago, which transformed the entire medium.

Crosby'sÂ Philco Radio TimeÂ show was eventually replaced by a program sponsored by Chesterfield Cigarettes that aired from 1949 to 1952 (and was also prerecorded). In the 1950s, Bing Crosby began to work more and more with Rosemary Clooney, with whom he would later star in the film White Christmas. Although 25 years separated the two, Bing and Rosie would continue to perform on the air together, even hosting a morning radio show for CBS together in 1961.

Frank Sinatra, the other great radio star of the 1940s, followed in the footsteps of Bing Crosby, who was a star on the airwaves a decade before. In fact, on Sinatra's first appearance on the radio, he performed a Bing Crosby song, in the style of his idol!

The year was 1935, Sinatra was a 19-year-old kid from Hoboken, New Jersey, and he and a group of singers known as the "Hoboken Four" got their big break on Major Bowes' Amateur Hour, a radio talent contest. They performed a rendition of the song "Shine" by Bing Crosby and the Mills Brothers. Frank sings Crosby's part, and his voice cracks as he does his best to scat like Bing. Nevertheless, the group won the talent contest, and went on tour with Bowes for the next several months.

Sinatra went on to be featured on local radio in the New York/New Jersey area, including performances at a club in Englewood, NJ called the Rustic Cabin that were broadcast on local station WNEW. From there, he was hired as the singer trumpeter Harry James's orchestra in 1939, and eventually Tommy Dorsey's Orchestra in 1940, where he appeared frequently on the radio.

In 1942, Sinatra broke out as a solo artist, and within a year, landed a gig as the lead vocalist on the long-running show Your Hit Parade. Your Hit Parade was the original pop hit countdown show, running through the biggest songs of the weeks. The only difference was they were performed live by an orchestra and vocalist. Sinatra's presence only enhanced his fame, especially with the hoards of screaming young girls.

Sinatra had his own radio show in the mid 1940s: Songs By Sinatra, featuring his arranger at Columbia records Axel Stordahl and his orchestra. The show eventually expanded from 15 minutes to a half hour show by 1945. His radio career peaked during World War II, and he became strongly associated with the music of the war. In fact, as news from overseas was pouring in, Americans often heard about it first on a Sinatra broadcast.

After the war, Sinatra's star began to fade, and his radio career ended not with a bang, but with a whimper. His 30 minute show was cancelled, and he began to host 15 minute shows instead: first Light Up Time with Lucky Strike and then To Be Perfectly Frank. By 1953, people thought Frank's career was over. His voice was now more weary than lively, but that weariness translated into a career renaissance in the 1950s: beginning with an Oscar win for From Here To Eternity and a string of hugely successful studio concept albums for Capitol Records.