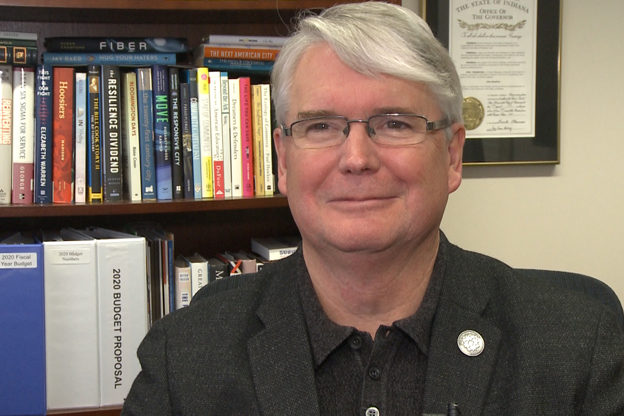 The city's long-awaited Switchyard Park is officially open, elected leaders meet Thursday on how to move the convention expansion along, and the mayor says 'plexes' are key to more affordable housing.

Hren: Let's jump in to the grand opening of the $34 million, 60 acre Switchyard Park this past weekend, how did it go and what took it decades to get to this point?

Hamilton: We've had four mayors involved in this going back a quarter of a century. There's still work that needs to be done to finish the park, there's a lot of grass that needs to go down and more plantings that will happen. We weren't going to keep the skateboarders off that park, there must have been 40 of them zooming around.

Tomi Allison, the first mayor with the park in the early 90s, her first step was imagining that railroad might close. She negotiated a right of first refusal to be able to buy it. So if they were going to sell it, the city got a right to match any offer. Then 12 years later the railroad said we are going to close this line, John Fernandez was mayor and got state grants and other funding to start the purchasing. Then Mark Kruzan as mayor built the B-Line, complete the purchasing and do the planning for the park.

My job was to look at the plans, review them, overhaul them, make a thousand decisions, and open the park.

Hren: How will the city staff the park now, it's almost doubling the city's park space?

Hamilton: We went from a $50 million assets for our parks to about $84 million, so that's a big change. We will have new staff there, there's a full time manager of the park. We have several other staff that come in and out. It's a work in progress, we're going to see what people use, where we need to be. There's a lot of performance venues - a 5,000 seat amphitheater, there's a great place for weddings, and a first ever police substation that will have our downtown resource officers and community room for people to use for meetings.

Hren: There was talk of another convention center meeting Thursday with elected officials, is that still on and is this another information session or will decisions be made to move forward?

Hamilton: Yes, we're not quite were I hope we can be in terms of making a decision on how to move forward, I'm itching to go, I think the community is ready. We need to work out details on the site plan and any governance issues, and those are things I think we can negotiate through. My main urging at this point is while we're negotiating the governance issues, we can continue doing the planning.

Places are booking their 2023 locations now, that's where we could be ready, if we start building right now.

Hren: The city asked for the services of a mediator from Ohio State University on the Farmers' Market situation, how do you expect this to help?

Hamilton: It can be confusing, I have to make sure I treat all of the patrons of the market evenly, we have a rule in the market you can't do political activity in the market proper and we've had to enforce that. And we enforce that to anybody no matter what their persuasion is.

The bigger issue which is what the Bridges initiative is after is trying to continue to wrestle with the racial history of our city with what stresses we have today. Making sure it's an inclusive city, and we've asked some folks with national expertise where there's racial concerns. We haven't gotten the report yet, but I know they've talked with dozens of people.

Then we'll share the report, we'll talk about, we'll see what we learn. This isn't about issuing a report and then say here are the seven steps that will fix this. It's a process, it's a conversation, it's an activity together and I look forward to that.

Hren: The amendments keep rolling in on the Unified Development Ordinance, most recently prohibits 'plexes' in downtown core neighborhoods. It's been the hot topic of the UDO - do plexes strip a neighborhood of single family housing and add more real estate for developers, or do they help the environment and the affordable housing demand?

Hamilton: I fight hard everyday for affordable housing, we have to have more housing, our city is going to continue to evolve, change is going to challenge what we have now. The UDO is a three ring binder, and we should constantly be reviewing it.

The council did allow to loosen up the ordinance for accessory dwelling units which are a disconnected plex, it's adding a dwelling unit in the back yard for example. I would have preferred to allow the plexes to move forward, I think there was a compromise that was ready that didn't quite get done.