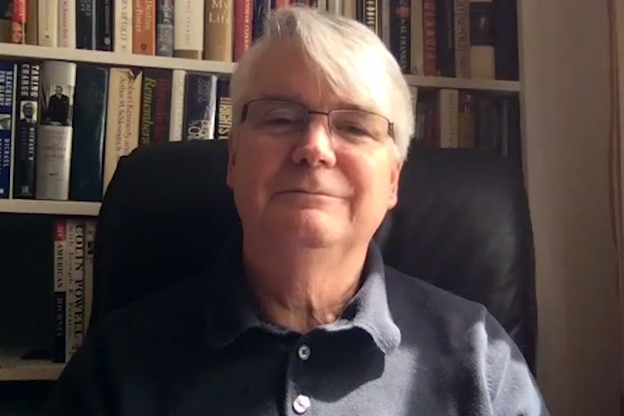 An update on the city's response to the coronavirus pandemic, small business loans, testing kits, first responder care, and your questions. This week's show was done on Zoom and streamed on Facebook Live - see the entire interview below.

Hren: Let's just begin with how you are your wife are doing?

Hamilton: Well, thank you, Joe. I'm personally fine, I feel fine. I'm trying to adjust to the new rhythms of work in the pandemic structure where we're doing Zoom and Google Hangouts and all those things all the time. I'm physically fine.

You probably know my wife is actually in the hospital, she's got COVID and dealing with that in the hospital. So that's a challenge to our household. It's pretty odd and stressful not to - I would want to be in the room 24-7, you know, with her, but I can't even be there at all. So, that's a little hard, but she's doing okay. And we got our fingers crossed. And thanks to all the great health care workers who are taking care of people like Dawn and others through this crisis.

Hren: We received a new report from IU Health Monday, 36% of ventilators are being used, 57% of ICU beds. So is Monroe County right now in a good position as this peak starts to move forward?

Hamilton: I meet regularly three times a week with the head of IU Health and county health and others to kind of run through the status of things. And it has consistently been that IU Health has reported through all of their surge planning different scenarios that they feel that the capacity of the system is ready for the surge that we're kind of seeing. We don't know exactly when it will happen or is happening. But I think it appears that with all the good work everybody's doing with physical distancing, that we have helped protect the healthcare system so it doesn't get overwhelmed and that seems to be the case so far.

Hren: We had a few questions come in on first responder personal protection equipment, how are supplies?

Hamilton: Well, the county fire departments the city fire department is adequately provided with the personal protective equipment. We're not sharing those kind of masks. We feel good about that. You may know we had a firefighter who got diagnosed with COVID. But he's well and he's back on the job. And the only people who are connected with him have all been tested and they're negative. And so so we were really pleased with that. But there may be shortages of CPE equipment in some places. I'm just I'm not aware of those particulars.

We've had precautions in place for quite a number of weeks with the police department. Our dispatch system started several weeks ago, trying to identify whether there was a COVID risk in the call, both for the police officers or firefighters as well as other individuals. And our officers have changed their protocols. Police officers, for example, typically are not entering private homes now to do interviews. They have masks that they use, police and fire, when they're interacting with the public. We do all these things to protect ourselves and protect each other. It's still a tricky disease that is spreading and so continuing the physical distancing is really important.

READ MORE: Do It Yourself: Make A Mask From Items Around The House

Hren: We had an email from someone saying they saw volunteers are doing face mask drives, and asked if the city can help them with volunteers or whatever resources they need?

Hamilton: So I think it's amazing. There are hundreds of people making masks and we want to thank Jason Moore, our fire department chief, who was along with a number of other people help coordinate, and Allison-Jukebox Community Center, we've kind of turned that into a mask factory in a mass distribution center. So we're getting like 1,000 masks a day or some enormous number that these volunteers have been stitching and, we thank them. You can go to the city website, volunteer network, you'll find ways to do that.

Hren: A question came in about space for those experiencing homelessness. Is there a need for more and how is that happening because the Shalom Center is restricted, right?

Hamilton: Well, they've changed their protocols. I understand that they're actually still providing meals and still doing some case work with people but very different. They're not allowing many people to come in which is important physical distancing. About three weeks ago, I asked a group to stand up together and work on the social safety net social services that we knew were going to be so important to strengthen and deal with this and one of the things they've been looking at is housing.

We know we are going to need housing for people who need to start isolating, either because they're at risk or because they've actually been exposed or diagnosed or even are recovering. It may even be today or tomorrow, I'm not sure, but this week with several partners the city of Bloomington is the fiscal agent to receive some state money to set up an isolation center that will be focused on many dozens, in a hotel that will let people isolate because if you don't have a home to go home to, how do you isolate?

Hamilton: There's an economic stabilization and recovery group led by volunteers from the community as well as Alex Crowley, the economic sustainable director. And they've been just busting their tails for two weeks solid to get that money appropriated, as well as another half million from the urban enterprise to stand up a loan program. And it just opened Thursday, I believe. And as of today, I believe we have 31 completed applications and another 100 that are in the process of the application for that funding.

So we know there's a real interest and a real demand for it. One other thing I want to note is we hope to be able to leverage that money, that it may be able to increase more than just two and a half million, but to maybe double it with some outside funding as well. So we're working on that still.

Hren: Some of what I hear from businesses though, is that they're wanting grants, they're not wanting to have to pay this back because they know they're going to be hurting, especially small businesses, for maybe a year or so. Is there a place that small businesses can look for grant money?

Hamilton: Well, the main point is the federal program, which is much, much bigger as it should be than the local program. But the federal program does allow forgivable loans, if small businesses use the proceeds for payroll and for the right kinds of purposes and I don't know all those details, but that's really where people should be aiming for the grant dollars because the city just doesn't have enough money to put a bunch of grant money on the street to support our businesses. We can't go into debt. What we're really trying to do is bridge loans to help people get to that federal money, which is so important.

Hren: I wanted to get an update on the Schooner Creek Farm lawsuit. The city filed a response with the court on Monday. The lawsuit argues the mayor and parks officials violated First Amendment rights at the market. In a previous interview you denied the claims. What was in the response that you sent on Monday?

Hamilton: Well, Joe, we've been sued by a couple different people for the farmers market and I think the responses have basically said the city has been responsible and following the law in all regards. In trying to run this farmers market as we have in now the fifth decade of the farmers market. I'm sorry, we have litigation, but that's the world we're in. You know, we continue to wrestle with a with a challenge. Look, it's a challenging thing in a community when, a now self professed supremacist to at least identitarian, which for most of us means supremacist, they may not want to use that word, but that's what it is in a public market wants to be part of the system.

It's it's anathema. It's not at all what Bloomington stands for, and I've made clear from the beginning that this market welcomes everyone, is inclusive and stands for the values of Bloomington, that absolutely condemned white supremacy or those who advocate for it. That's perfectly valid to do and I will continue to do that. However, as a government, I also cannot stop customers from coming to the market because of what they believe or stop a vendor from selling at the market because of what they believe - that's the First Amendment, you have the right to believe what you want and not have the government punish you because of it. That causes stress. And we're still in the middle of that.

There were some concerns, which have been shared with Schooner Creek and another vendor who we feel did not fully comply with the terms of the vendor contract. One example is under the contract, vendors are required to notify us ahead if there's going to be a different employee working the booth, called stand assistance. And on at least two occasions, Schooner Creek did not do that, which was a violation of the contract and we wanted them to know that that's the case.  Another vendor, had a similar violation of the contract and we've had violations in the past. Typically they respond. There's an interaction with the vendor to make sure they don't do it again.

Hren: Someone emailed us saying there seems to be a sudden appearance of spray paint vandalism downtown, while we quarantine, who is doing that? And where are the cops?

Hamilton: I have not heard reports of more vandalism. I can tell you overall the police reports are down significantly in the community. We have fewer crime calls and reports. I can look into that. The police are very much on the scene and work in our community to protect everybody. If you have reports of that kind of thing, please do let us know. We take it very seriously.

Hren: We have a question from someone who is concerned about the traffic flow on Walnut because of the new walking trail that crosses it. I'm assuming they're talking about Switchyard Park?

Hamilton: Maybe, you know we've had the B-Link Trail there and the Switchyard Crossing will be there. There is pedestrian access to Switchyard from Walnut now, I don't think I'm sorry, I haven't been there. I've been self quarantine in the house for a while but there will be Hawkeye lights put up on Walnut for the pedestrians to protect them. Because that's a big street to cross, but it's really important to get people in and out of the Switchyard that way.