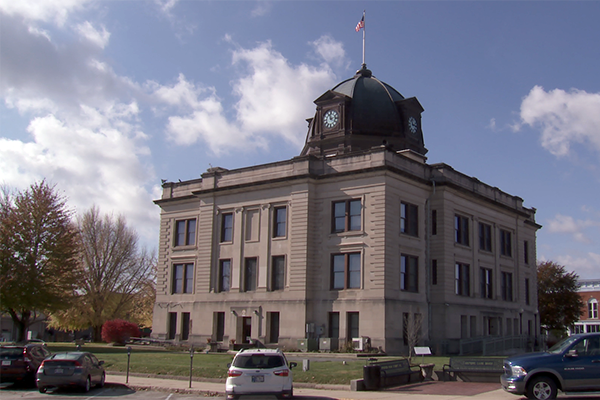 Spencer Pride hosted a virtual forum for candidates Tuesday night because two of Owen County’s commissioners, board president Jeff Brothers and commissioner Steve Williamson, are not running for re-election.

“We want to represent the geographical diversity of the county before the general election in November,” Spencer Pride president Jonathan Balash says.

Brothers, Williamson and commissioner Gary Burton pursued and approved a deeply controversial county ordinance last year that prohibits anyone from using the Owen County courthouse for a festival or special event.

The commissioners originally introduced the idea of a new festival ordinance in August as a response to what they described as a petition from county residents who were concerned about taxpayer costs. But that “petition” turned out to be a form letter from the anonymous Facebook group Morals of America describing the Spencer Pride Fest as overly sexual and inappropriate for children.

When Brothers and Williamson announced they would not seek re-election, Balash and Spencer Pride decided to host a nonpartisan forum for voters to ask questions and have a better understanding of the candidates’ positions on Owen-County specific issues.

When asked if changes need to be made on the ordinance, several candidates chimed in.

“When they were implementing the ordinance it was unprofessional and disrespectful to everyone who lives here,” Republican candidate Angela Frank says. “The courthouse lawn belongs to everyone.”

Many believe a change is needed for the better.

“We have to do what’s right and be transparent and we have to accept the public’s input,” Democrat candidate Mike Swafford says. “Mistakes are going to be made and when we make them, we have to admit to them.”

Candidates were also asked about the communities’ acceptance of the LGBTQ community. Bipartisan support comes from both sides on that issue.

“I don’t think it’s the government’s business to necessarily promote or denigrate any group, but their actions need to be family friendly and appropriate," Republican candidate Tony Voelker says.

Aside from the ordinance, candidates brought up other issues such as improving roadways, practicing better recycling habits, optimizing internet speeds in rural areas and having enough supplies readily available for the community during the coronavirus pandemic.

Mitch Legan contributed to this story.