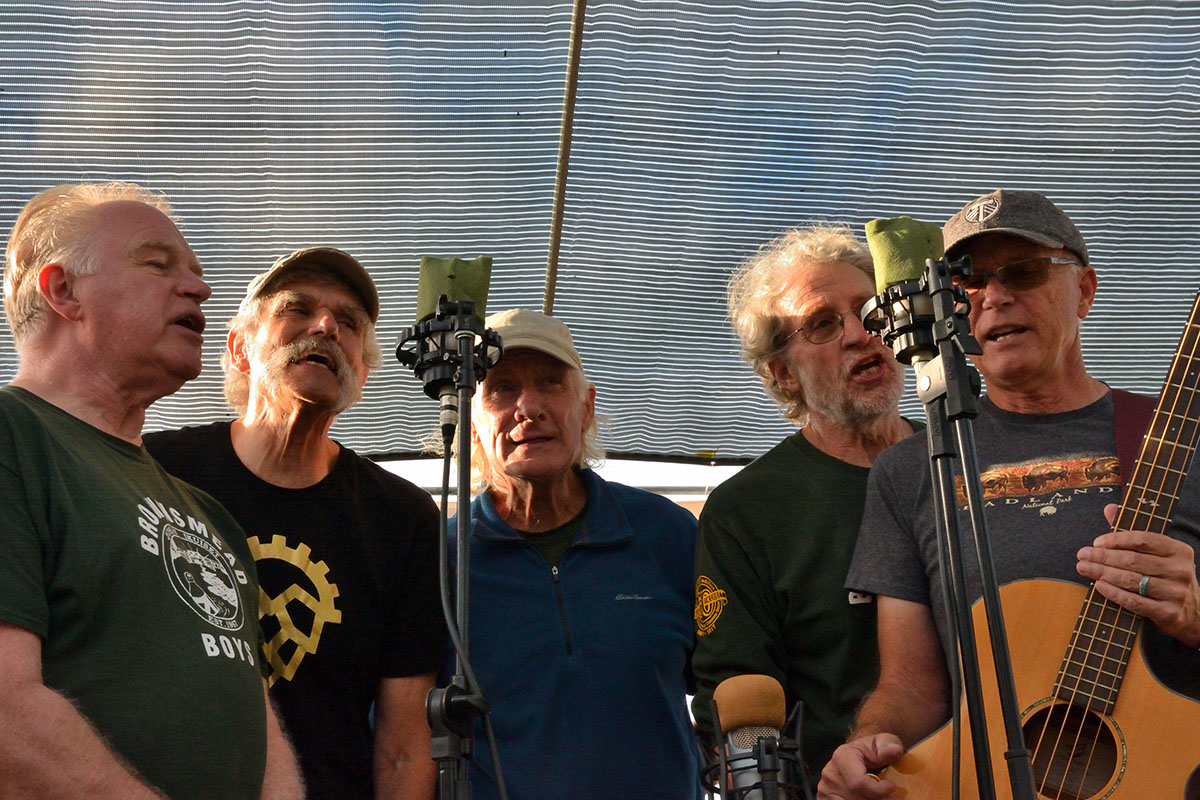 “The men were after me something awful after I won the armwrestling championship,” begins Sara Skamser, a netmaker in Newport Oregon. “The bar was packed. It was after a halibut opener. I went and signed up, weighed in. My name got called and there was Shirley, the arm wrestling champion of four years. And she just grabs ahold of me. And is turning colors and grunting, and I’m holding steady. And then I realized I had not tried yet. And I slammed her down!”

Swapping stories about work, and play, is an Oregon fishing industry tradition. And some poets and musicians near the coast have elevated commercial fishing lore to an artform. The string band Brownsmead Flats often sing a song called “Astoria’s Bar.” They’re not talking about a pub, but rather the intimidating waters where the Columbia River meets the Pacific Ocean. The song was written by Mary Garvey, who lives just across the Columbia River in Long Beach, Washington. For both Mary Garvey and Brownsmead Flats, singing about the region is essential. “I think it is very important to, if you can, write about specific people, specific events, specific communities,” says Mary. “We like to do a lot of songs about living on the coast or near the coast,” says Ned Heavenrich of Brownsmead Flats. “We sort of like to refer ourselves as crabgrass: a bluegrass sound, but with a maritime flavor.” His bandmate, Dan Sutherland, agrees: “Maybe if we would have lived in Wisconsin we´d write about cows and milk and cheese. Here, you write about fish and water and trees. And the rain!”

Both artists are mainstays at the FisherPoets Gathering, an annual event held by and for insiders. Pretty much everyone on stage at the Gathering is, or has been, a commercial fisher. This includes two members of the Brownsmead Flats, one of whom grew up in the tradition of gill net fishing on the Columbia. Mary Garvey is an exception. She never made her living on the water, but her songs help commemorate events in the community. One example is “Hold On,” a song that tells the story of a dramatic Coast Guard rescue that happened just before one FisherPoets Gathering. “I knew it should be sung at FisherPoets, because they actually knew the boat, and they knew the place,” says Mary.

Some of the songs by Brownsmead Flats address transitions taking place on the coast.

“[It’s] changed since we've been here,” says Ned “from an industrial economy to a tourist economy, which has benefited us a lot. More venues and restaurants and festivals have sprung up.” But the regional focus on tourism can feel like something less than a net positive for locals. “It’s a little bit of an irony,” notes mandolin player Larry Moore. “You’ve replaced one kind of industry with another. Timber and fishing, that is what people consider the source of [this] place.” He says he would like natural resource and tourism industries to thrive together: “It would be nice to have both. Sustainable everything!”

Net-maker Sara Skamser encounters awestruck visitors on a daily basis. “I see tourists just lining the docks, and they all have this faraway look in their eyes,” she laughs. “Like ‘I could do it, I could fish, I could go out there.’ It’s something within all of us, I think because we’re made of sea water.” Increasingly, fishers and other workers share what they do with outsiders. Sara has made Foulweather Trawl, her fishing net workshop, a go-to spot for educational events and tuna barbecues. “We’re in-between industry and lay people,” she says. “We do a lot of workshops with lay people and marine biology students. The guys working on the nets just fascinate people. The fishermen are busy, they never tell their stories. We’re kind of the in-between.”

COVID-19 precautions mean that the social life around commercial fishing is on hold.

Brownsmead Flats? Their last gig was at the FisherPoets Gathering back in February. But when they take the stage again, they’ll be back to doing what they do best--bridging the worlds of work and play in coastal Oregon.

Music in this piece by Mary Garvey and Brownsmead Flats, with additional music by Gibson & Toutant.

Hear this story on this episode of Earth Eats.