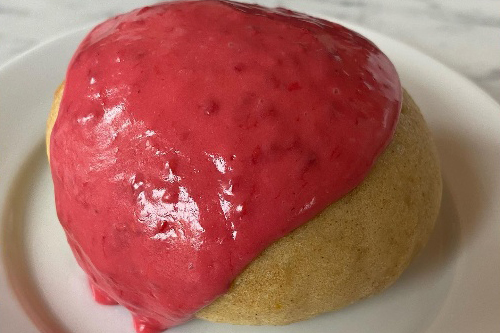 Anisette Sweet Shop is nestled in a quiet residential neighborhood near downtown Raleigh, North Carolina. with its distinctive ivory and creamsicle color scheme, the store fits right in among streets lined with daffodils and crepe myrtle trees.

“[We have] lots of nice sort of peachy colors, with an occasional strong square element to make it not seem like a little girls tea party or whatever,” laughs owner Nicole Evans Groth.

Nicole and her husband Jason, who like me are Bloomington ex-pats, have owned the sweet shop and coffee market for almost five years. When COVID-19 affected their ability to have customers in the store, they had to figure out how to bring Anisette’s ambiance outside.

“People used to enter, and we had these beautiful marble top tables with the glass case on it,” says Nicole. “And one of the saddest things was trying to figure out [was] how we could still display everything. When you can see food, you’re more likely to want it. So the front of the building has this nice big picture window where we put shelving. We bought what we call the robot, which is kind of like an old-fashioned spinning pie refrigerator. So that’s been a nice addition in COVID-times.”

And now the desserts spinning slowly in the window advertises not just what’s for sale, but what’s in season. In the cold months, there’s vanilla pumpkin cake, cranberry scones, and bourbon cream pie. In the summer, peaches, blueberries, and bright colors.

And here in central North Carolina, there’s a long springtime, where one of the first things Nicole turns to is a fluffy meringue or cream cheese frosting. She says with a laugh that maybe it makes her think of bunnies. When I stop by in April, it’s a little cold for some produce, but there are still apple varieties everywhere. “The cameo [apples] are really nice and they have such a floral flavor,” she says. “So this weekend, we'll have apple gruyere cobblers, apples with a little bit of nutty cheese. It's chilly outside. But there are nice breezes. And so it's all these sort of soft, gentle flavors.”

Tunnel-grown winter strawberries are one of Nicole’s favorite transitional spring ingredients.. They can be used to top a variety of cakes and buns with a technicolor glaze. “There's no reason to not just take some strawberries, raspberries, whatever, blend it up, mix it with some powdered sugar and see what happens,” she says.

Southern Ground is a new cookbook by Carolina Ground, the mill that supplies Anisette Sweet Shop with flours. The tour of Southern craft bakeries features Nicole’s recipe for mascarpone cake, a staple she adapts for whatever fruit is in season. “The base is a mascarpone cake, which really just means that most of the fat in the cake is from mascarpone cheese rather than butter,” she explains. “It has a really nice dense and kind of silky texture. And then this one has dried chamomile in it and little studs of fresh strawberries”

The chamomile is a nod to a time when gardens are starting to fill with fresh herbs. “I think that that's something that people maybe shy away from with baked goods,” she says. “Nice herbaceous aromatic flavors [like] rosemary and lavender. And these are all things that you're using dried, so you don't necessarily have to worry about getting them fresh right now when you might when it might be harder to find.”

“We had a customer who brought us a bunch of bay leaves from her backyard recently,” she says. “I happen to love the flavor of bay leaves, and it's one ingredient that we can then use to inspire all sorts of things. If you put it in the pan, and then put cake batter on top of it and bake your cake, you will get that flavor throughout the cake. I came up with this ricotta cheesecake recipe where we're putting the bay leaves on top. Mostly because I wanted to be able to see them, because they're so pretty. In that case you peel them off before you eat the cheesecake. But those bites where the bay leaves were, you're getting that flavor pretty intensely. And then the rest of it is just like this nice clean cheesecake flavor.”

Every month Jason makes the 3-hour drive across the state to the Carolina Ground mill to pick up bags of bread, rye, and pastry flour. Nicole thinks of these ingredients as being as fresh and changeable as fruits.“It's all whole grain,” she says. “There are no parts of the wheat removed. So you're getting all of the beautiful nutrients and the fat and flavor. And every time we get a new batch, there's always a chance that it's going to act a little differently … There's a lot of having to react to the flour, which I totally appreciate. Because we want to treat it like food and get the most out of it in terms of flavor and texture.”

Anisette Sweet Shop is small enough that the two owners can buy ingredients on a whim from the co-op or farmer’s market rather than wholesale. This means Nicole is often tweaking her baking recipes. And in the spring, there are plenty of ingredients to play around with. Not just for the taste, but for the mood boost that many of us need right now. “It’s a good time for items that evoke happiness,” she says. “We’ve just come out of a very hard winter. So really nice, comforting, soft foods”

Music by Yasuhiro Mori and Elepheel via Soundcloud CC.