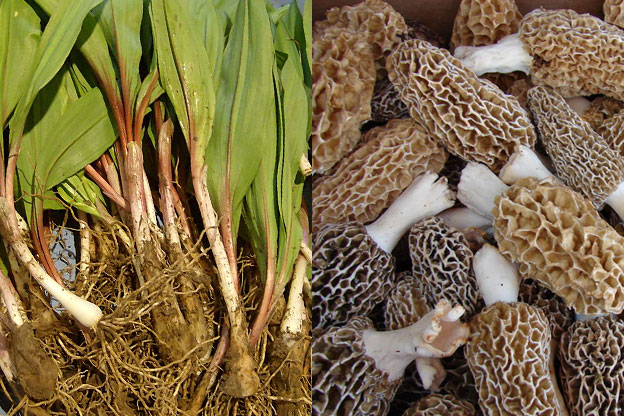 The dawning of spring has many people heading to the first outdoor farmers markets of the season. But other, more adventurous types, are heading out into the woods to forage for more wild foods.

Early springtime is heaven for foragers. In addition to mushrooms starting to pop up, wild leeks or ramps are a special treat for wild food hunters. They don't usually start popping until early May, but sometimes the weather is such that they just can't wait.

Chef Bob Adkins has been foraging, fishing, and hunting all his life.Â He told me that typical spring weather conditions are near perfect for ramps -- a bit of rain, weather in the 60's, but still cool at night. During the day, temperatures need to be up in the 60's and 70's.

When asked about where to find such ramps, Chef Adkins was a bit tight-lipped about the specifics. He had this to say about the rare delicacy:

Because they've become such a big player in the culinary world, especially high-end restaurants, they're charging anywhere from $7-10/lb. So, they're not quite morel-status yet, but they are expensive and sought after, so people who find a patch kind of guard them. I've found numerous patches and gone back the next year and they haven't been there. They're going to grow in sandy areas, just like leeks that thrive well in sandy environments, sandy soils. The creeks are the biggest factor.

If you're interested in learning how to cook these springtime treasures, keep listening to Earth Eats in the coming weeks. We'll be preparing some tasty recipes using ramps in an upcoming episode of the podcast.

The appearance of ramps is an indication that morel mushrooms are right around the corner. So, if you find a patch of these wild leeks, you might want to come back a couple weeks later to see if some morels have popped up in their place.

Ron Kerner has been hunting mushrooms in southern Indiana for 20 years and he's the man behind the website IndianaMushrooms.com.

Morel mushrooms, sometimes also called sponge mushrooms because they look a bit like a natural sponge, can be different colors -- black, gray, yellow -- and also different sizes. They're very highly sought after among mushroom hunters and very highly priced for the rest of us -- $15-17 per pound or more.

Not only are they hard to find, they only come up for about a month every year - mid-April to mid-May. "You won't find one in July," Kerner says. "They like it to be wet. We need some rain and warmer nights."

Morels sometimes growÂ at the base of trees, or even, some say, by railroad tracks. Kerner says that as many people as you talk to you, you'll find as many different suggestions as to where these elusive mushrooms can be found, and even if you ask a mushroom hunter where they like to go, good luck getting an answer out of them.

"That's something people really keep closely guarded. You'd be hard-pressed to get someone to share their morel spot with you," Kerner explains.

Although he did tell us that, in Indiana,Â state parks and forests are two places where you can hunt. "It's just a matter of getting out into the woods and putting your head down and looking," he said.

If you're new to mushroom hunting, Kerner cautions that you should find someone who can help you identify your mushrooms before you try to eat them. Either that or "get a mushroom field guide," he says. "If you're hunting for the table, you definitely have to know what you're doing because there are some poisonous varieties out there."

Listen to our complete interview with Ron Kerner: Morel Mushroom Hunting â€“ On The Prowl For Elusive Sponge Mushrooms

Remember, both morels are ramps delicate organisms, so think sustainably when you're harvesting them. For morels: stick to "the rule of thumb..." -- if the morel is smaller than your thumb, leave it. It takes them 10 days from when they pop up to produce spores, so harvesting only mature mushrooms -- after they've already released their spores -- will mean a more bountiful harvest again next year.

And for ramps, the season harvesting season is fleeting. "As [the ramps] get shadowed or over-grown, they bolt and go to seed and they're finished for the year," Chef Adkins explained.

He said that, like anything you're harvesting wild, you should always leave a few ramps in the area so they will go to seed and make a new patch of ramps the next year. Â If you do, you can come back in successive years to harvest again.

Now to the kitchen! This simple recipe uses three types of mushrooms â€“ portobellos, creminis, and chanterelles â€“ and it's out-of-this-world with flavor.

(Note):If you're using mushrooms that you've foraged from the wild, make sure they're cooked all the way through.

This recipe is so simple that you hardly need a recipe:

More On Foraging (from Earth Eats)