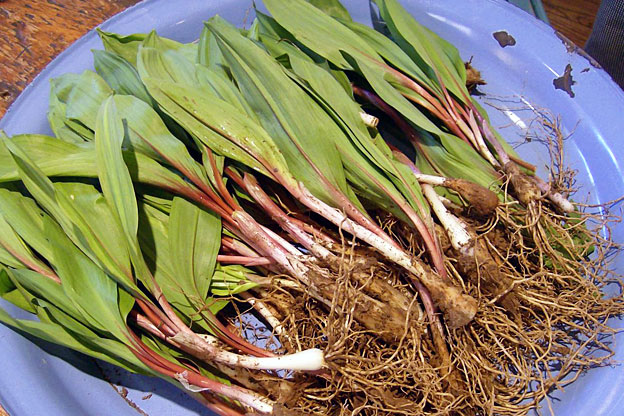 Hunting for ramps Chef Bob Adkins harvested these ramps just outside of Bloomington, Indiana. If the weather is right, these springtime treasures pop up for a few weeks in early spring. (Annie Corrigan/WFIU)

I'm a fisherman, so I'm out there mostly to catch fish but I always keep my eye open over my shoulder to the dry part of the creek to see if I can spot these bright green objects. And when I do, I either pick them by hand or go back with a shovel.  You'll find a patch that's maybe 50 by 20 feet of these beautiful leeks or ramps. If somebody's never seen it, it's hard to imagine, they really just light up -- it's like the forest floor is green with fire, and if you step on one, like you said, the smell is so intense.

Springtime is an exciting season for foodies -- foragers in particular. It's the season of mushroom hunting, foraging for wild greens, and, if you're lucky, you may even start to see patches of wild leeks -- also known as ramps -- popping up.

I met up with someone who knows all about ramps, Chef Bob Adkins.

After a day of fishing on a lake near Bloomington, Indiana, Adkins came home with a big, beautiful batch of ramps. He was surprised to have been successful in his foraging so early in April -- normally ramps aren't harvested until early May.  "Maybe I just got lucky and stumbled across an early batch," he mused.

I asked him what it takes, weather-wise, to coax the ramps up from the forest floor.

"Typical spring weather," Adkins said, "rain, weather in the 60's, probably still cool at night – in the 40's and 50's at night. And then 60's up to 70's during the day, but I think probably those mid-70's days we had a couple weeks back were a big factor in these popping up so quick."

How To Spot Ramps

Ramps are pretty unassuming-looking, unless you see them out in the wild.

"I think if you're outside enough and you've seen enough of the native plants, these are as emerald as the Emerald Castle in the Wizard of Oz," Adkins said.

Everything But The Roots

According to Adkins, the entire plant is edible from the roots up -- almost like a scallion. To prepare them, just chop off the very end of the root system.  "The interface between the white bulb and the green leaves, the maroon-colored area, is totally edible. And the leaves are just fantastic – they're like a really garlicky spinach," Adkins said.

Ramps are a member of the onion family, the alliums, but they taste like some of the most pleasant garlic and onion flavor you could ever have. Adkins says the taste isn't mild, but ramps are also not as astringent as cultivated onions are, though they exude a lot of the same sulfur compounds as other members of the onion family. "They're just a very clean oniony, garlicky taste," he said.

And they're really useful, more so than a lot of members of the family because the leaves are so tender. They can be pureed almost like basil for a pesto. They can be sautéed like spinach. They can even be eaten raw -- toss small amounts into your salad to give it an extra kick.

The maroon and the white parts are more for cooking.  You toss them with scrambled eggs or home fries and bacon. "That's the way they eat them in West Virginia and Virginia -- the Appalachian states, tossed with fried potatoes and bacon along with some sweet peppers," Adkins said.

When I asked Adkins about the hunting process, he demurred. He said that ramps are such a big player in the high-end culinary world that they are expensive -- $7-10/lb -- and very highly sought after.

"They're not quite morel-status yet, but they are expensive and sought after," Adkins said, "so people who find a patch kind of guard them. I've found numerous patches and gone back the next year and they haven't been there."

This particular batch of ramps came from just south of Bloomington (Indiana) next to a creek. Adkins found the ramps between an old riverbed and the present riverbed up on a plateau that he says was probably very fertile but also very sandy.

"They're going to grow in sandy areas, just like leeks that thrive well in sandy environments," Adkins explained. "So, you're going to find them near creeks, old creek beds, new creek beds where they have plenty of water, plenty of well-drained soil."

Ramps also have an extensive root system for being such a small plant, so you have to take a shovel if you want to get the bulbs -- they won't pull out of the ground easily.

The season for ramps is fleeting. "As [the ramps] get shadowed or over-grown, they bolt and go to seed and they're finished for the year," Adkins explained.

He said that, like anything you're harvesting wild, you should always leave a few ramps in the area so they will go to seed and make a new patch of ramps the next year.  If you do, you can come back in successive years to harvest again.

As an amateur forager, I wanted to know if there are any poisonous plants that could easily be mistaken for ramps. As long as I use my nose, Adkins told me, I should be just fine. But, it is important to keep one thing in mind...

Mushrooms On The Scene

Another note about ramps is that they appear just before the highly sought-after morel mushrooms. So, if you come across a patch of ramps, you might want to revisit that same location a few weeks later in the hopes of seeing some morels popping up.

More On Foraging (from Earth Eats)