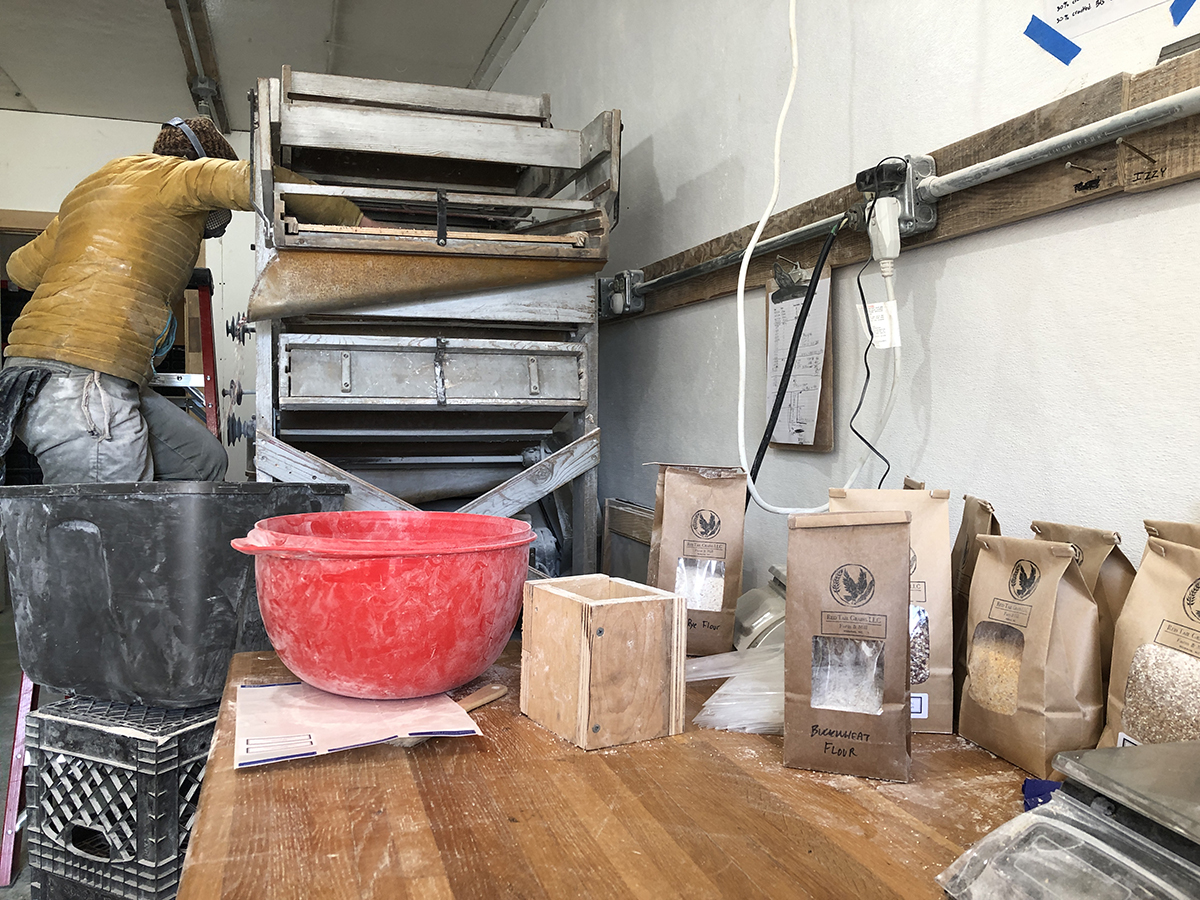 Roommates Danny Cowan and George Allen were sitting around the kitchen table one day in 2011, talking about the basic building blocks of meals. Since meeting at Oberlin College years ago Cowan had opened his own bakery and Allen had worked on vegetable farms, even learning about maintaining farming equipment. The two were bonafide local food aficionados. They lived in the foodie farmland around Chapel Hill, North Carolina. And yet something was missing on their plates. “Something that fit into the bulk of everyone's diet,” says Cowan. “Questioning why that wasn't something that was being addressed and handled more in the local food economy.” This was the genesis of Red Tail Grains, where they now farm and process whole and milled grains.

“Our vision is to produce staple crops for the local food economy,” says Cowan. While not certified organic, Red Tail emphasizes soil health and regenerative agriculture, farming without synthetic fertilizers and herbicides. “Neither of us grew up in farming families,” says Cowan. “And in terms of this type of agriculture, (the) machinery involved, and the fact that you generally only get one crop per year, has made the learning curve very steep, and high risk.”

Allen and Cowan grow modern grains, and also a number of heritage corns, wheats, spelts, and ryes. They’re varieties that have long histories and complex flavors, and haven’t been selected for yield in the same way as commercial varieties. Red Tail received their first seeds, for the famed Red Fife hard wheat, from a baker friend who wanted a local source for his products. “He said that if we grew it, then he would buy it from us at a high price,” says Cowan. “And so that really allowed for us to experiment.” They’ve since branched out into a number of other grains that are regionally beloved. One is Bloody Butcher dent corn, a “delicious and sought-after” variety with a long history in Appalachia. “It’s kind of a story of family farms,” says Cowan. “Just passing it down generation to generation and using it for pretty much everything, whether it was grits or cornmeal or even distilling.” They received the seed for Cateto Orange flint corn from another friend. He raved about using the South American corn, which had also made its way to Italy over time, for polenta. “Not many people were growing it, and that's partly because  it gets very low yields,” says Cowan. “But we tried it out for him because he was one of our mentors and one of our buyers. And we fell in love with the flavor of it, and the color of it.”

In choosing grain varieties, Cowan and Allen are interested in multiple factors. Does it grow well, in their region of North Carolina, with organic-ish techniques? Are commercial and home bakers interested in it? Is it nutritious? And, of course, does it taste good? “You just learn so much from that first couple of plantings and plowings,” says Allen. “What’s the soil like, what the seed bank is like. We’ve had fields that we broke two weeks before planting a cash crop, and that’s turned out really poorly. We've had fields that we've planted wheat or rye two years in a row, and that came out really poorly. And fields that we lost track of in the summer and came back to bite us next summer.”

“The dealing with weeds is a kind of a constant challenge,” says Cowan. “When you are (farming) conventional, and you have access to herbicides, fungicides, pesticides, and that can be another tool in the toolbox. But since we don't do that, we have to figure out how to combat the weeds and keep them at bay.” They do these through smothering weeds with cover crops, creating robust soil environments for crops, and utilizing mechanical tillage. “And that’s something where the more we learn about the soil, we struggle with that balance of not wanting to spray herbicides, but also not wanting to really disrupt the soil through tillage,” says Cowan.

“It's been a fun journey,” says Allen. “It’s a little stressful, I guess… (we have) really complex systems. There's a lot of unknowns that are hard keep track of unless you have a ton of money to keep track of every aspect of it… and what's available to you to learn from other people is just less sometimes, especially at our scale, which is bigger than like a vegetable farm, but smaller than most grain farms.”

Prior to the pandemic Cowan and Allen mostly sold whole grains wholesale to bakeries. But now, with a greater interest in home baking and local foods, Red Tail Grains has pivoted to the retail of milled grains, selling straight to consumers who have big baking and cooking ambitions. Financially, it’s been a successful time for the two farmers. And it’s also served as a reminder of why they got into this kind of agriculture. “We really, for the first time, felt like we could be a provider of grain for the regional economy, especially with all the grain shortages that were happening everywhere,” says Cowan. “It was cool to really feel like we were living a little bit closer to our mission. So yeah, it just the whole process has been a lot of trial and error. And it's been hard. It's been hard. But it's also incredibly rewarding to actually reap the benefits of that process over the course of these eight or nine years.”

Listen to the full story on this episode of Earth Eats.