Marketing Yogurt To Men? Put Abs On The Package 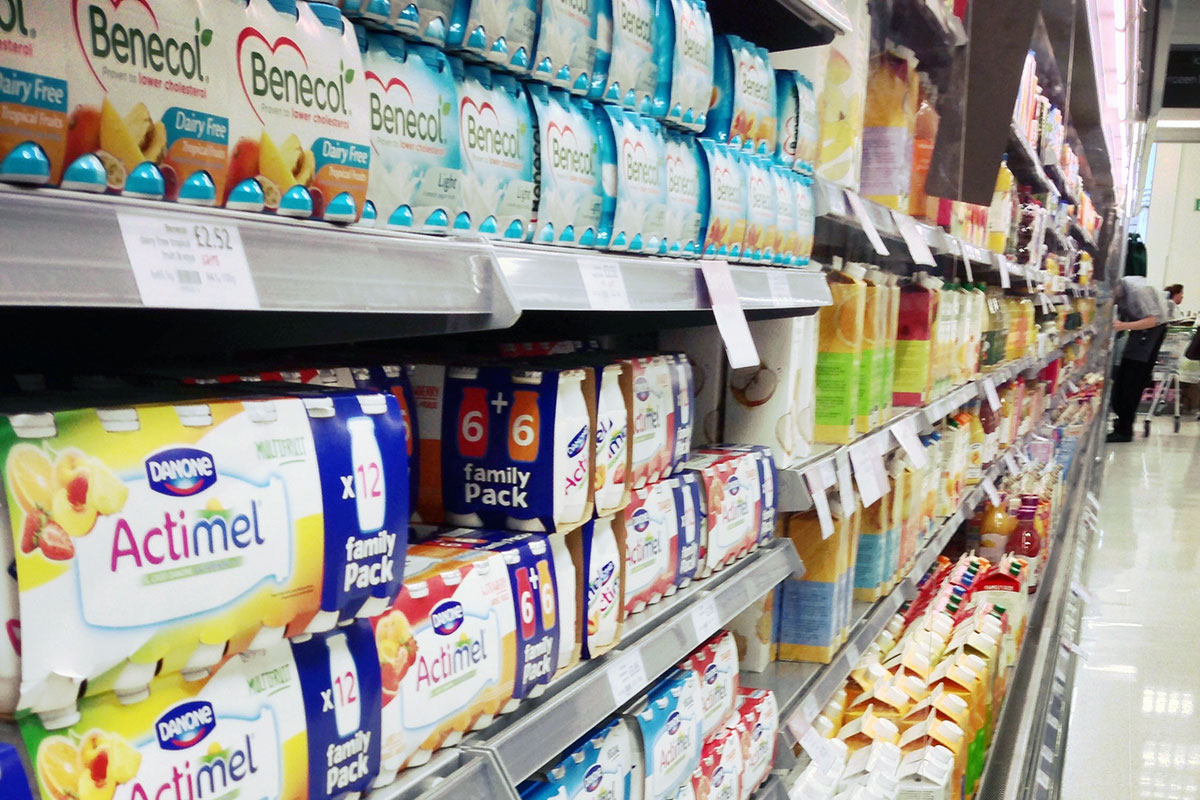 Over the past year on Earth Eats, we've welcomed students from Indiana University's food studies programs into our studios to conduct interviews with fellow scholars. It gives all of usÂ a chance to sit in on conversations with people who spend their time thinking critically about food.

In this week's show, it's Emily Contois, a PhD candidate at Brown University. Her research looks at consumer culture and the food industry. We talk to her about Donald Trump's food habits, and the 1982 satire by Bruce Feirstein Real Men Don't Eat Quiche.

This interview has been edited for length and clarity.

Emily Contois:Â One of the things that defines dude food is this carefree, limitless way of eating that doesn't take into account moderation, common dietary nutritional advice; that it often maps onto stereotypical assumptions about foods that are masculine, masculine appetites, flavors and ways of eating and thinking about food that map onto these limitless, voracious, seeking satisfaction ways of eating. So, when you look at â€˜dude' as a concept, as a linguistic term, it can definitely map onto men and to women, to masculinity and femininity. But dude food in particular gives us often very regressive, sort of stagnant definitions of how to be a real man. One of the cookbooks I'm looking at, literally titled Dude Food, is the only cookbook I've ever seen where there are pictures of men just being dudes â€“ bodies on the beach just looking toward the open ocean â€“ and the only picture in the book of a woman is a woman without her top lying on her belly in bed with a lover. So the only way that women are configured into the recipes for dude food are as ways to be able to get women in bed and to be able to satisfy all of their appetites. It definitely maps onto these ideas about gender that have significant effects for how we think about gender equality and justice in the United States.

MB: Can you go a little bit more into the cultural and political impact of this category of food?

EC:Â I've been looking at food packaging design for foods that have recently been developed and marketed to men that haven't been in the past. I'm looking at diet sodas â€“ like Coke Zero and Dr. Pepper TEN â€“ and at yogurts. You know, food that's conventionally been gendered feminine in American culture, and has only been marketed to women with any sort of effort. In both cases, when food companies wanted to make and market these food products to men, the packaging design reinforces these conventional notions about masculinity. They're black or gray in color. They have sans serif fonts. Powerful Yogurt that I'm looking at, their tag line is "Find your inner abs," literally has a 6-pack chiseled into the plastic side of the container. So I argue that even in the packaging design that gender hegemony works in a circuit; that the way we define masculinity and femininity in our culture shapes how those packages are designed; but then that goes in this circuit and reinforces what we think about gender. It's part of constructing how and where those ideas come from. And with yogurt in particular, when you compare, for example, Oikos Triple Zero, which is for men in a black package. We have the NFL logo. Comparing that to Light &Â Fit, which comes in a purple container, very feminine colors, more cursive style fonts, that they're nutritional capacity maps onto those gendered consumptions. Light &Â Fit was designed to the lowest calorie yogurt it possibly could be. It's designed as a dessert substitute, to be able to have that taste of sweet without going over in calories for women working to diet and restrain their appetites to achieve thin ideals. While the men's yogurt is designed to have as much protein as it can, to be as fulfilling and satisfying as it can be. So, when you look at the nutritional composition, when you look at the packaging designs, they reinforce these ideas about who men and women should be, how that should map onto their bodies, and the sort of radical potentials identity has when we go out into the world â€“ whether it be in politics or how we operate in families. The world of food gives us those indicators of how those ideas about gender are constructed.

MB: So, that brings an example of a dude food to mind, for me I think one of the most quintessential examples â€“ the steak. A steak is a man food, but only if you eat it properly. President Trump has faced criticism from a variety of sources about how he eats and how he orders his steak. I was wondering if you saw any of the response about President Trump and his first meal out in D.C.

EC: This is such a great question. I think we can look at it through the lens of gender for sure, but I think it also has a lot to do with class. I can start with gender. When we think about dude food and this binary of masculine/feminine mapping onto unhealthy/healthy â€“ that there's this carefree approach to food and not caring about guidelines or how we should eat and being able to thwart those sorts of expectations â€“ that Donald Trump's foodways do mirror that sort of limitlessness. Strangely enough, I've been working with Real Men Don't Eat Quiche, which was this work of parody and satire and it was a best seller in 1982. One of the lines in it reveals how these ideas about food and about gender map onto a view of the world, and to ideas about global politics. One of the examples where there's truth between the lines of satire in Real Men Don't Quiche is this line about, 'Things were better in the past, when men were men and women were sex objects and the rest of the world understood. One false move and we nuke â€˜em.' I remember the first time I read that when I started working with this text, that it reminded me a bit of how this particular president is approaching the world and thinking about it in terms that we haven't seen for a while. The other thing with Real Men Don't Quiche is this idea that real men don't eat light, healthy foods like quiche; that they don't diet, or if they do, they would never talk about it; that they would certainly lift weights for strength and to build heft. So I see those sorts of mirrorings in ideas about gender.

But in thinking about Donald Trump's foodways and class, what it makes me think of is I actually read Donald Trump and Guy Fieri through one another. I find that the polarizing reactions to both of them have something to do with how they subvert expected social norms and standards â€“ ideas about professionalization, of who should be president and of who should be celebrity chef. Ideas of about a real man should act. Ideas of middle class respectability or of affluence. And I think that's part of where the rub is with Donald Trump and the way that he eats. A man with considerable means and affluence, but the way that he eats doesn't map onto how one would assume someone of that class standing would eat and would view food. And so I think there it gives us a way to think through the tension of him presenting himself as a populist, and as someone who understands the concerns and experiences of average citizens. And so I think his food highlights that contradiction of how he presents himself and conducts himself along those lines of class, and how they map out over the American populace as well.

MB: That sent me spinning into so many awesome places. It has me thinking a little bit about authenticity. I'm wondering then what this means for Trump and how he's allowed to present himself, or participate in food.

EC:Â Authentic from a food studies perspective is this very contentious term. It's very constructed, it's highly variable, but it has considerable meaning, and it can have big weight. Particularly from a capitalistic standpoint, from a branding standpoint, from being able to say this is authentic. But then I mean, he and all eaters have the right and we all should be able to eat the way that is authentically us. Having ketchup on steak is delicious in its own way. That's something I always try to emphasize with my students â€“ to have this omnivorousness in what they're willing to taste and what they're willing to learn and what ideas they're willing to think about. So, I think this "foodist," this elitist kind of perspective on how Trump eats isn't serving any of us very well, but I think that disconnect between the way he eats and the class standing he literally possesses, they don't read as authentic because of the way that they mismatch. You could also read that as subversion, right, that there's something interesting there. That's where I see the parallel to Guy Fieri. The food he presents that so many think is highly commercial and overtop, what kind of an authenticity is that presenting? And Diners, Drive-ins And Dives frequently trades in the discourse of authenticity of the kinds of restaurants that they're promoting.

This is our take on cauliflower rice. Chef Daniel Orr combines it with citrus, onion and parsley for a gluten-free tabbouleh.

The business of helping people prepare to survive the next big calamity has changed substantially in the age of President Donald Trump.

The Trump White House proposed a 21 percent cut to USDA's discretionary funding. While the organizational changes do not necessarily preview budget changes, rural advocates are worried.

Farmers have a chance to prevent a newly-arrived threat, Palmer amaranth, from becoming a permanent fixture. It's an aggressive weed that's been devastating corn and soybean crops across the Midwest.

Chinese Chicken Is Headed To U.S. But It's Really About Beef

The U.S. has given the green light for China to start sending cooked poultry to America. It's part of a long-simmering trade deal that will open China's huge market up to U.S. beef producers.