An Educational Farm Where Black History, And Black Kids, Are “Front And Center” 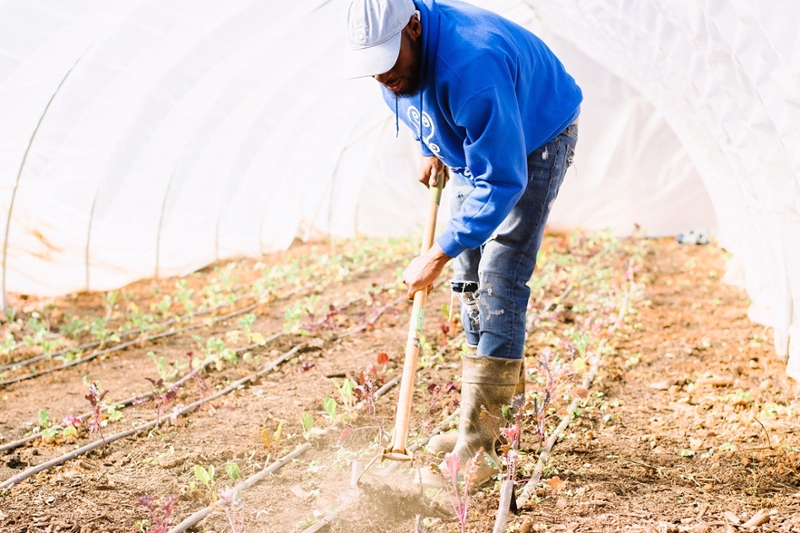 A nature lover and animal fanatic since childhood, Kamal Bell initially went to college to become a veterinarian. But his mission in life was changed by a book recommendation. "So my dad has like a book collection that can rival anything, in my mind," he said. "And one of the books that he always suggested that I read was Message to the Blackman in America by Elijah Muhammad. And what I learned in that book was that, and I had to question myself about, was 'What am I doing for Black people?'" And that's when I was like, 'I want to become a farmer'."

Kamal ended up switching his major to animal sciences and industry. He worked on North Carolina A&T State University's campus farm, got his Master's degree and started teaching middle school, and began visioning a place where he could grow food to combat food insecurity in black communities. Kamal is now the CEO of Sankofa Farms and its associated teaching program in Efland, North Carolina.

The Agricultural Academy at Sankofa is a mentorship and skill-building STEM program for African American young men, ages 11-16. Kamal says that by learning the tools and technologies of farming, lessons are made evident. "Anyone who has a farming background knows that you can't do anything by yourself," he said. "Well, you can, but it takes a long time. (And) if you go on the farm and you try to do something, and you're not aware of people around you, you get hurt and you hurt other people. So that creates a sense of responsibility, and teamwork. You'll tie in all the different aspects, because agriculture does that just by how it functions."

The farm focuses on vegetable crops and honeybees, and four students are now certified beekeepers. There's a reason Kamal thinks bees are so approachable, despite initial fears the kids might have. "Everybody has interacted with a bee at some point in their life, he said. "So it's really familiar, whether you've been stung by one, or have been dealing with a sting, or you've been chased by one ... I think it's just more familiar than a pig or a chicken."

In addition to teaching farming, the Sankofa Academy runs an Airbnb agritourism program called Bees in the T.R.A.P., and Kamal encourages students to participate in public speaking engagements. He sees these activities developing their portfolios for the future, in an industry that is, like many, experiencing major changes. "I want them not to think about agriculture as just being a farmer, because that doesn't exist anymore," he said. "Just doing one thing, that doesn't exist in any industry."

Sankofa Farms and the Duke World Food Policy Center were recently awarded a major grant from the U.S.D.A.'s Nutrition and Agriculture Service Learning Program. The grant team will develop a curriculum for 5th grade students that aims to develop knowledge of food and agriculture to improve health outcomes. "We want capture the journey and tell the story of African Americans, and people of African descent, and our contribution to agriculture in the grand scheme, and then also to focus (on) the South here in the United States," he said.

Working with animals has always meant a lot to Kamal, and he shares this passion with his students. "It seems like when you introduce animals to students, and they figure out that they can work with them, it just opens up a vast amount of opportunities for them," he said. "Just because urban youth usually don't have the opportunities that other students would have, especially African American boys. So being able to bring things to them, front and center, is something that allows their minds to start working where they can see themselves like you know, 'I can work with animals, I can work with plants, I can work with bees, I can see myself building things, I can see myself being an engineer.' It really just helps them identify a place."

And Sankofa Farms will soon be solidifying its place in a new way. Kamal's brother, Jamal Bell, is working on a children's book, titled "Khalil's Day at Sankofa", named after Kamal's eldest son. They think it might be the first children's book by Black farmers, about Black farmers.

Music by Aku, nuun, and standingwave via SoundCloud CC.