After Decades of Discrimination Lawmakers Propose Justice for Black Farmers 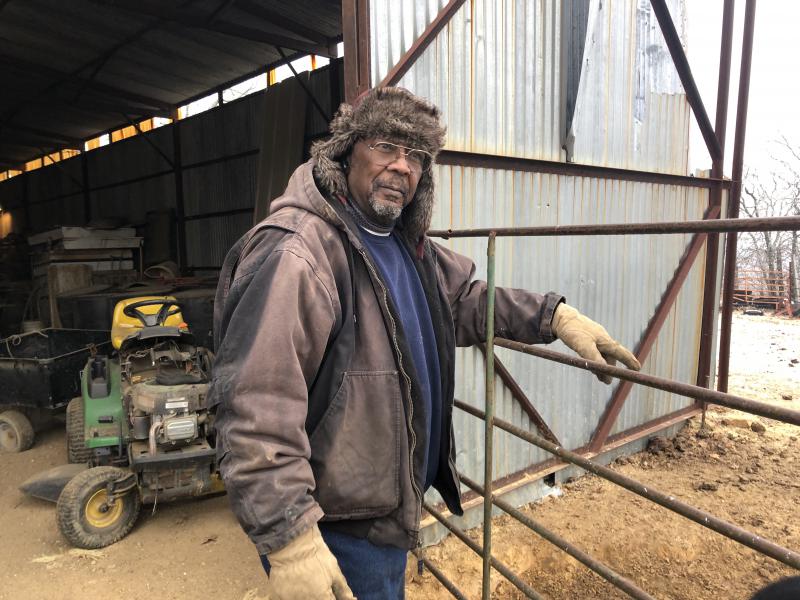 Alvin Lee watches his cows outside his barn near Wewoka, Oklahoma. He has about about 20 cows and 160 acres of land. (SETH BODINE / HARVEST PUBLIC MEDIA)

It’s a cold February afternoon, and Alvin Lee’s cows are hungry. He says he has to put three or four bales of hay out every other day, and he only has about 10 left.

New hay is expensive -- about $40 per bale. He managed to get some for $20 each, but they are three years old. If this keeps up, he’ll have to scrape together money for more hay, he says.

Lee used to work in construction, but because of injuries from his time in the Marine Corps, he had to stop working. He moved to Wewoka, Oklahoma 25 years ago and bought 160 acres of land, which he hopes is his legacy.

“I always thought that when a person dies, you’re supposed to leave more than a birth certificate and a death certificate,” Lee says.

Ranching hasn’t been easy. Between building a house, maintaining the land, buying hay and updating equipment, the price adds up. While he tried to get aid from the U.S. Department of Agriculture, he says he never gets enough help. After 25 years, he says he hasn’t made a profit.

“If you got capital, you can, you can basically purchase land, but we have a lot of people who want to do agricultural business type ventures, but don't have the capital,” Tillman says.

Black farmers won a more than $1 billion discrimination lawsuit against the USDA in the 90s.

Many farmers lost their land because of decades of discrimination. The estimates of Black-owned land lost since 1910 adds up to anywhere from $40 to $250 billion, says Dania Francis, an economics professor who’s on a team trying to quantify Black land loss. One major reason for the land loss is violence, she says.

“Entire Black populations were encouraged to leave an area under threat of bodily injury,” Francis says. “And those farms were then sold for pennies on the dollar, by the local jurisdictions, to white farmers.”

Now with the transition to Democrat-controlled Congress, there are renewed efforts to rectify years of racism. In the Senate, the Justice for Black Farmers Act has several proposals to help Black farmers, such as the USDA buying land and giving up to 160 acres to Black farmers who agree to use it for agriculture. The bill also proposes debt relief for farmers who didn’t receive it as part of the USDA discrimination settlement — something Tillman says was one of the more important parts of the lawsuit.

“A lot of people still did not get that particular part of it and are now still in debt and faced with foreclosure,” Tillman says.

One of the biggest changes proposed by the bill is providing more oversight to protect civil rights at the USDA. Valerie Grim, a professor at Indiana University Bloomington, says the discrimination lawsuit didn’t address racism within the department.

“There was really no punishment for the folks who, who have been engaged in systemic discrimination for decades, in terms of the local offices and how they were being managed and how policies were being implemented,” Grim says.

Tillman says he thinks the bill is a good start but needs changes. He says there needs to be more feedback from groups like his about how to best support Black farmers, and the bill also supports “socially disadvantaged” farmers, which he says is too broad.

“You know, I want to see everybody that's out there, whether you Hispanic, whether you Asian, or whatever. I want to see them, you know, get treated the same,” Tillman says. “But with this deal, they're talking about justice for Black farmers.”

Besides the Senate bill, there has been other efforts to help Black farmers this year. The House Agriculture committee has recently approved $4 billion of debt relief for Black farmers and other minority groups, which was inserted into a coronavirus relief bill. Whether that will help Alvin Lee is still up the air.

As for Lee, he says it’s been a difficult time ranching, but he has no regrets. He says he remembers his own father talking about buying land and leaving it behind before he died. At 71, he says he keeps working so that he can leave something behind for his grandchildren.

“I'm trying to leave something behind so that they can take it to the next level,” Lee says.

But for Lee, one thing is clear: Black farmers need help.

This story comes to us from the food and farming collective, Harvest Public Media. Listen to the story on this episode of Earth Eats.