"What Goes 'Round": TEDxBloomington at Buskirk-Chumley 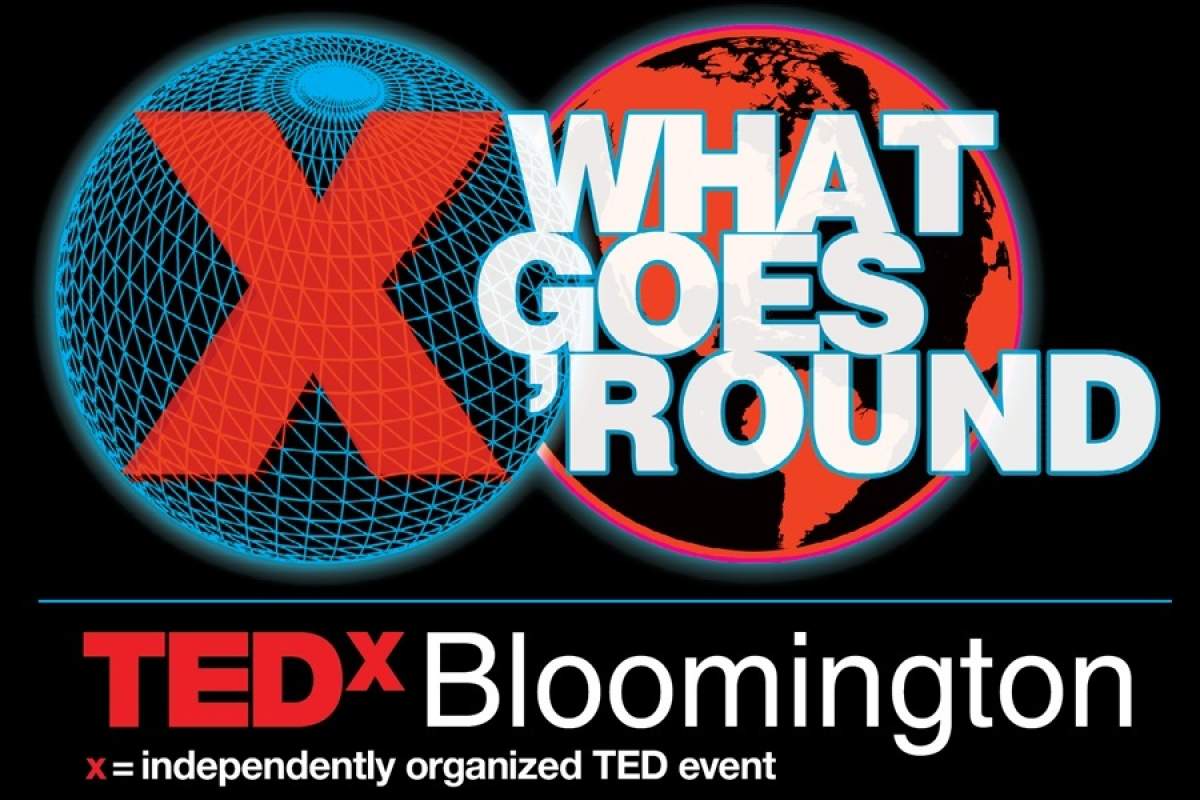 Fans of weekend radio on WFIU are likely familiar with TED talks: WFIU has been airing the "TED Radio Hour" Sunday afternoons at 4:00 p.m. for the past year. The TED conference began over 20 years ago in Silicon Valley, featuring speakers sharing their "Ideas Worth Spreading" in the fields of Technology, Entertainment, and Design. It has since grown into an annual event covering a much broader array of 4- to 18-minute lectures on medicine, music, sustainability, art, and everything in between.

Over the past five years, TEDx events have been cropping up around the country. These "x" events are independent, locally-organized, and non-profit events that continue the spirit of the national TED conferences, with a distinctively local flavor.

The 2014 TEDxBloomington event, titled "What Goes â€˜Round," takes place this Saturday, April 26th at the Buskirk-Chumley Theater. This marks the third such Bloomington-based TEDx event-following 2013's "Jump In" and 2011's "The Wisdom of Play"-which began as a way for a group of IU alums and TED enthusiasts to give back to their community.

For "What Goes â€˜Round," the speakers will all focus on topics that are literally or metaphorically "round"-spherical, global, or cyclical-covering everything from diagnosing illnesses, to improving renewable energy, to understanding gender identity.

Many of the speakers at this year's TEDxBloomington event have been featured on WFIU or WTIU in the last several years. You can see links to their stories in our preview below.

Leimkuhler is the founder of the Bloomington Trashion Refashion Show, a benefit for the Center for Sustainable Living, and a co-founder of Discardia, a non-profit group focuses sustainability education through the reuse of recycled material. Her TEDx talk this year will be on how engaging with Creative Reuse could help us deal with major environmental problems.

WFIU Arts profiled Leimkuhler in their coverage of the Trashion Refashion Show from 2012. In August of 2013, Artworks devoted part of an episode to a panel discussion featuring Leimkuhler, focusing on the maker fair Makevention, an event that that showcased both high- and low-tech crafting.

Educator Amy Brier, the founder and director of the Indiana Limestone Sculpture Symposium, will be discussing new ways to look at and think about local limestone, sharing her personal relationship with the stone, and exploring its culture and geologic history.

Brier chronicled the history of Indiana Limestone on an episode of Artworks back in 2010 in preparation for the Indiana Limestone Symposium from that year. More recently, she's been featured as a guest on WTIU's Weekly Special.

Danielle McClelland serves as the Executive Director of the Buskirk-Chumley Theater and is the founder of the Bloomington PRIDE Film Festival. McClelland's TEDxBloomington talk will discuss the flexible nature of sexual and gender identity.

McClelland was twice a featured panelist on Noon Edition, once in 2010 discussing the PRIDE Film Festival, and once again in 2008 discussing the preservation of history in Monroe County. The film festival has also been covered by WFIU Arts back in 2010, as was the history of the Buskirk-Chumley Theater, featuring McClelland as a guest.

IU Professor T. Kelly Wilson, the Director of the Indiana University Center for Art and Design in Columbus, will be discussing the relationship between art and design at this year's TEDxBloomington event.

The recent installation at the IU Center for Art + Design "Color Me ______" was a featured story through WFIU Arts last year. Wilson was also one of the collaborators for the Voces Novae Chamber Choir's Walking Tour of Columbus Architecture, covered by WFIU Arts last month.

IU Journalism Professor Jeremy Shere, author of Renewable: The World-Changing Power of Alternative Energy, will be discussing the history of renewable energy, as well as ways to improve the energy landscape of the future.

Shere is a regular contributor to WFYI's Sound Medicine and WFIU's A Moment of Science. He's written features on A Moment of Science covering topics including an Antarctic volcano, global warming and mammal dwarfism, and the bubonic plague, among many others.

Christian Freitag serves as the Executive Director of the Sycamore Land Trust, and his talk will be about embracing a new land ethic by thinking about a different time scale.

Freitag was twice a featured guest on Noon Edition, once back in 2007 discussing the Sycamore Land Trust, and more recently in 2013 discussing Indiana's state forests.

IU Professor and Photographer Jeffrey A. Wolin has compiled several works featuring photographs of people accompanied by their stories, including "Written in Memory: Portraits of the Holocaust," "Inconvenient Stories: Vietnam War Veterans" and "New Faces at the Crossroads: The World in Central Indiana."

At TEDxBloomington, Wolin will speak on his latest series of comparative portraits he took of residents living in the Bloomington Pigeon Hill neighborhood during the late 80s-early 90s and again in 2010-2012. WFIU Arts covered these portraits in the recent feature "Living To Tell The Tale: Pigeon Hill, Then And Now."

IU Professor of Sociology Bernice Pescosolido serves as the director of the Indiana Consortium for Mental Health Services Research. Her talk will be on the patterns in mass shootings that tend to be overlooked by the media in favor of debates on gun control and mental health services.

Pescosolido was twice featured as a guest on Profiles: once in 2008 discussing her mental health research, and again earlier this year along with actress Glenn Close and Pamela Harrington, the co-founders of Bring Change 2 Mind, an organization that aims to remove public misconceptions of mental health issues.

The ensemble Salaam have been introducing audiences to the music of the Middle East and North Africa since 1993. They will be performing the songs "Queen of Sheba", "Layla", "The Mariachi Stole My Heart," and" 21st Century Gypsy" at this year's event.

The members of Salaam were guests on Artworks in 2013 to reflect on twenty years of making music together and to perform songs in the studio.