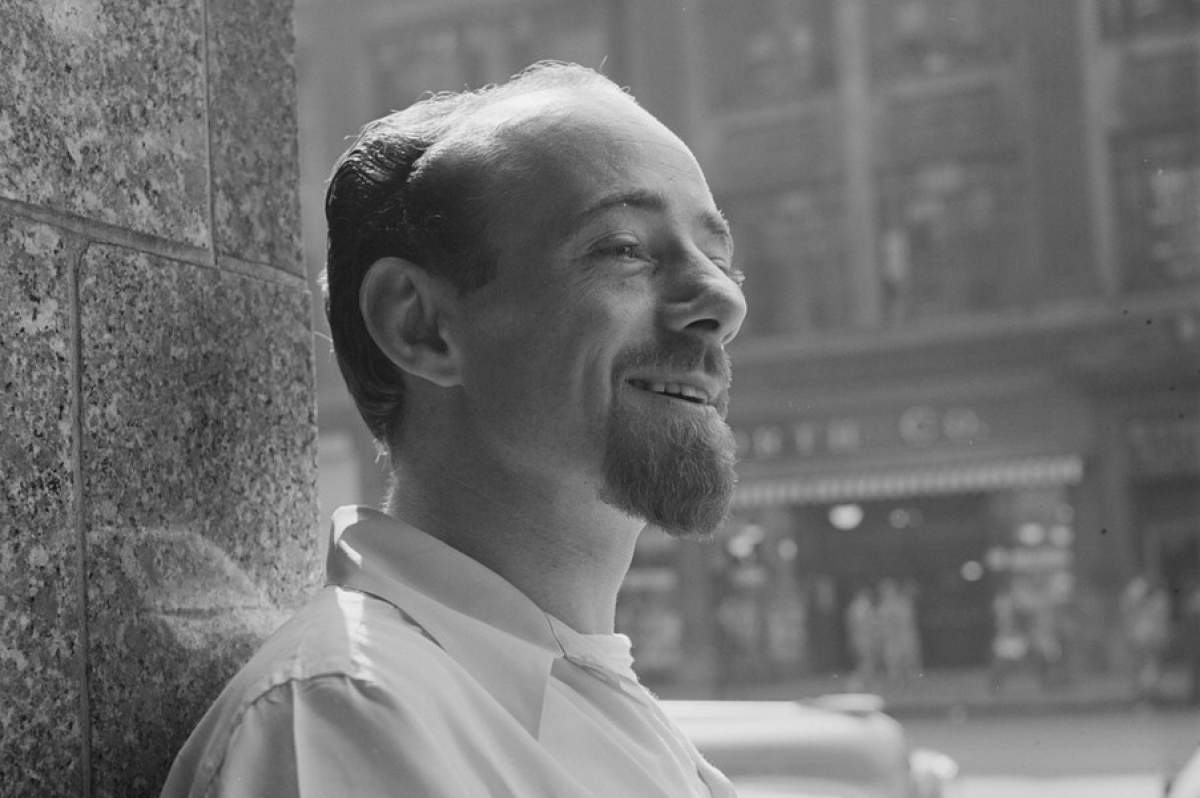 On this show, we celebrate the life of jazz singer Dave Lambert, who would have turned 100 years old this week. Lambert is a name that is familiar to many vocal jazz aficionados, one third of the groundbreaking 1950s group Lambert, Hendricks, and Ross. But before joining forces with Jon Hendricks and Annie Ross, Dave Lambert was introducing the language of bebop jazz into the art of singing.

Dave Lambert, although a pioneer in the art of scat singing and vocal harmonies, is a bit of a cult figure in the world of jazz.Â Lambert's voice was not beautiful in any classical sense. But he was smart, kind, with a knowledge of swing. Plus, he was tuned into the the emerging bebop scene of the 1940s and managed to be on the cutting edge of that sound for most of the 1940s and 50s.

Lambert was born in Boston on June 19, 1917, 100 years ago this week. He was the ultimate journeyman in jazz. HeÂ started out as a drummer and soon became a vocalist, singing first with Johnny Long's orchestra in the early 1940s.

In 1944, he ended up in Gene Krupa's orchestra, singing with Krupa's vocal group the G-noters, and befriending Krupa's main vocalist Buddy Stewart. Stewart was an alumni of Claude Thornhill's vocal group The Snowflakes, and like Lambert, he was a fan of the emerging bebop scene.

In January 1945, he presented an original song for Krupa to record called "What's This". It was a bebop head, but instead of getting one of Krupa's instrumentalists like Don Fagerquist or Charlie Ventura to perform it, Lambert and Stewart recorded the song themselves, scat singing. It was one of very first sung bebop tunes ever recorded. The only other person who could truly say they were recording bebop scat solos at the same time was Ella Fitzgerald.

The partnership between Lambert and Stewart proved to be a hit, and in 1946 the duo left Krupa's band to record on their own. They recorded together in the late 1940s, along with musicians like Gerry Mulligan, Benny Green, Blossom Dearie, and Charlie Barnet.

However, they never made it onto any big labels. Their reputation as premiere bop vocalists came to a head in 1949, when the duo performed alongside the king of bop Charlie Parker at New York's Royal Roost jazz club for a series of broadcasts. Unfortunately, Lambert lost his singing partner a year later, when Buddy Stewart died in a car crash at the age of 28.

After the death of Buddy Stewart in 1950, Dave Lambert was left without a musical partner. He worked for the next several years leading his own vocal ensemble called the Dave Lambert Singers, a group that he began working on in 1949. The Dave Lambert Singers were in the mold of The Pied Pipers or The Mel-Tones, although usually with a more bebop style. This group, which varied in size, members, and even sometimes name, could be called up in a pinch to record with any variety of ensemble.

For instance, in 1951 when the Dave Lambert Singers joined up with Mel Torme and Pete Rugolo, they provided some light accompaniment for a recording of "Bewitched". But when he joined up with Jo Stafford two years earlier, the Dave Lambert singers were performing straight-ahead bebop. The tune was called "Jolly Jo," and Lambert wrote it. But it also had another name, a complex mathematical formula, the supposed formula for "Bop."

The Dave Lambert Singers also worked with King Pleasure on the 1953 Presitge album King Pleasure Sings. This album included examples of what's called "vocalese," where new lyrics are added to an existing jazz solo. Lambert (along with Jon Hendricks) would later blend the vocalese style with bebop in their groundbreaking group Lambert, Hendricks, and Ross.

One of the most high profile gigs for the Dave Lambert singers in the early 1950s was also one of the most notorious recording sessions in jazz history. It featured the Dave Lambert Singers, the premiere bop vocal ensemble and Gil Evans, the premiere bop arranger who had recently worked with Claude Thornhill and Miles Davis. The last piece of the puzzle was Charlie Parker, the alto saxophonist and premiere bop musician, who wanted to combine jazz with choir and orchestral instruments to create something more akin to 20th-century classical music.

It seemed, at least on the surface, to make for an interesting session. However, the session's producer Norman Granz was disappointed in the result, and cut the session off early. Parker, Evans, and Lambert were pleased with their efforts, but didn't like the engineer's mix. They wanted another session, but Granz refused. The jazz public seemed to side with Granz, and it's been considered one of the biggest disasters in jazz history. Nevertheless, the Charlie Parker/Gil Evans/Dave Lambert session is an interesting historical artifact.

Not long after his notorious session with Charlie Parker in 1953, Dave Lambert made contact the musician who would change the course of his career: Jon Hendricks. Hendricks was an aspiring singer and writer, who tapped into the spirit of the vocalese craze that was made popular by King Pleasure. Hendricks was looking for an arranger and vocal ensemble for a vocalese version of Jimmy Giuffre song "Four Brothers" that he was working on. He remembered Lambert's work with Buddy Stewart in the 1940s and more recently with King Pleasure, so he asked him to help. Lambert apparently wrote the arrangement in only 15 minutes. Jon Hendricks and The Dave Lambert Singers recorded "Four Brothers," with new lyrics by Jon Hendricks, in 1955 as a single for Decca along with another vocalese song "Cloudburst."

For the first time since he worked with Buddy Stewart, Dave Lambert found a musical partner. He and Hendricks quickly turned to their next project, re-arranging the music of Count Basie for vocal ensemble. They brought the idea to Creed Taylor, a new record exec for ABC-Paramount, and he offered them a deal to record an album of Basie material.

Lambert put together a choir that included a 26-year old singer named Annie Ross. Ross was well-versed in jazz and vocalese, having already recorded a hit vocalese version of Wardell Gray's song "Twisted." However, it became clear that none of the other singers in the session could sing or swing the way Lambert, Hendricks, and Ross could. So, Lambert fired the rest of the choir (which apparently included a young Mark Murphy) and forged ahead as a trio, opting to multi-track and overdub all of the parts themselves.

The result was called Sing A Song Of Basie was an immediate, if not unexpected hit, and turned Lambert, Hendricks, and Ross into an almost overnight sensation.

The Hottest New Group In Jazz

They recorded three albums for ABC, and then three more for Columbia. The Columbia records in the late 1950s and early 1960s are considered by most to be their finest. In 1959, they were named the "hottest new group in jazz" by Down Beat magazine. That year, they also won Downbeat'sÂ poll for best vocal group, and would go on to win that title 3 more times over the next three years.

The group only worked together for about 8 years: Annie Ross left the group in 1962. But these years were explosive for their creativity. Lambert deconstructed and rearranged existing bop charts by Woody Herman, Miles Davis, Horace Silver and others, while Jon Hendricks added new lyrics. Hendricks and Ross were the vocal stars of the group, but occasionally Lambert's unpolished vocals would take centerstage, like on the song "Bijou" or occasionally on a vocalese solo like in the Horace Silver tune "Come On Home."

After Ross left, the other two soldiered on with replacement singer Yolande Bavan for the next two years. Some of the magic was lost without Ross's signature vocal ability and humor, but the Lambert, Hendricks, and Bavan would record several live albums with some success.

In the early 1960s, both Dave Lambert and Jon Hendricks had experimented with a few solo projects, but by 1964, they had goneÂ their separate ways. Lambert's next project was another vocal group that he led called "Lambert & Co," which was more or less a revival of the Dave Lambert singers from the early 1950s. The group consisted of four singers in their early 20s, with 47-year old Lambert as their leader. He took the group to RCA Records to perform a handful of Lambert original songs for producer George Avakian.

However, the demand for vocal jazz music was waning by 1964, and the group wasn't signed. Luckily, the entire audition process was preserved for posterity by documentary filmmaker D.A. Pennebaker, who later became known for his documentaries about Bob Dylan and 60s counterculture. Pennebaker's 15-minute black and white documentary Audition at RCA is the last (and arguably the best) document about the jazz singer.

A little over a year after Lambert and Co's audition at RCA, Dave Lambert was killed in a roadside accident. On October 3, 1966, Lambert was fixing a flat tire with a stranded motorist on the side of the road, when they both were struck by an oncoming vehicle. He was 49 years old.

Dave Lambert In Down Beat