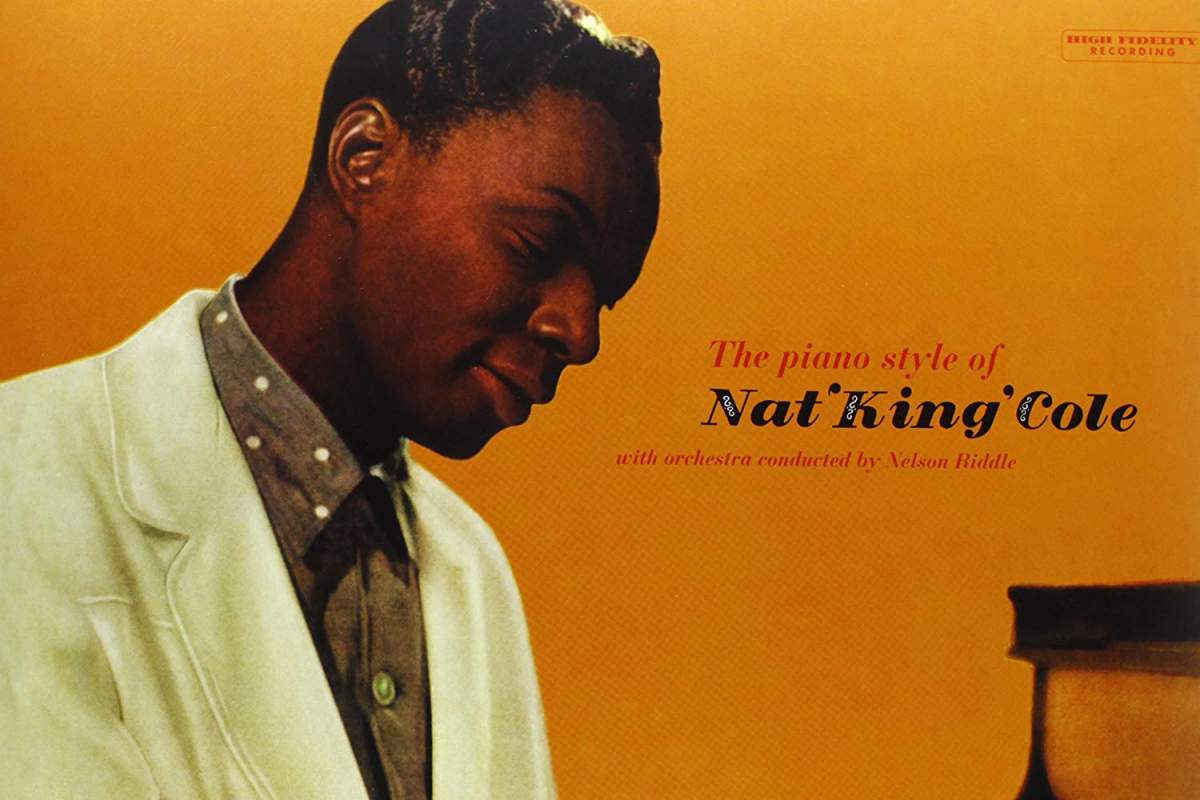 Arranger Nelson Riddle was one of chief archtects of the sound of pop music in the 1950s, with a style that was harmonically rich and texturally diverse. Riddle would have turned 100 years old on June 1, 2021, so we'll salute him with a series of shows on his work with various singers, beginning with his 10-year partnership with Nat King Cole.

Between 1950 and 1960, the partnership between Cole and Riddle was one of the most fruitful in all of pop music. Together they made over 250 recordings for Capitol Records, including two of the biggest hits records of the 1950s: “Mona Lisa” and “Too Young.” Cole and Riddle’s relationship (like their music) was easy-going and professional, and together they elevated the craft of American Popular Music. I’ll explore that singer-arranger partnership on this episode.

It can be said that Nelson Riddle made Nat King Cole a genuine pop star and worldwide phenomenon, and Cole made Riddle the most respected man in the pop music business. They needed each other. Nat and Nelson were two of the most talented, professional, hard-working, and easy-going gentlemen in the industry. Their partnership was devoid of any drama: it was carefree and easy. Nelson’s arrangements were simple and straightforward, which matched the smooth delivery of Cole’s voice without any unnecessary flash.

Nat King Cole was always a naturally gifted singer, but he’d spent most of his early career as a jazz pianist, and an influential one at that. Likewise, Nelson Riddle was always a naturally gifted arranger, but he spent most of his early years as a ghostwriter or assistant, living in the shadow of other big names in the industry. In 1950, they were both new to the spotlight, and their mutual diligence began to bring out the best in one another.

Their first collaboration came that year with a Ray Evans and Jay Livingston song called “Mona Lisa.” It was a tune that was shopped around and turned down by a number of musicians. Cole even dismissed it at first as “that Italian song.” He ended up recording the song in March of that year, backed by the Les Baxter Orchestra on strings. The arrangement was by the young Nelson Riddle, who was still ghostwriting for Baxter at the time (Baxter ended up stealing credit for the arrangement, at least at first).

That Italian song became an enormous hit. “Mona Lisa” won the Academy Award for Best Song and by the end of the year, it became the best selling single of 1950. “Mona Lisa” also marked a turning point in Cole’s career, moving away from jazz and towards life as a pop ballad singer.

The two followed this recording up the following year with the Sidney Lippman and Sylvia Dee song "Too Young." Likewise, it was credited to bandleader Les Baxter, although Riddle was responsible for the arrangement. "Too Young" became the overall biggest pop hit of 1951 by any artist.

"Unforgettable" and the Other Capitol Singles

Once it was revealed that Nelson Riddle was the ghostwriter behind the two biggest hits of 1950 and 1951, he became more in demand as an arranger. His next big collaboration with Nat King Cole came the following year, an Irving Gordon and Lee Gillette song called “Unforgettable.” It was the first song officially credited to Nelson Riddle. Although his arrangement borrowed the sound of another big musician at the time, pianist George Shearing.

In the song’s introduction, we hear a piano playing block chords, mixed with vibraphone and guitar, which was an imitation of the unmistakable sound of George Shearing Quintet. It made sense: Nat’s jazz background mixed well with Shearing’s laid-back jazz sound. Now, it wasn’t Shearing on this recording, but the two did later record together about a decade later on a 1962 Capitol album.

Nat and Nelson recorded mostly singles together throughout the late 1950s. For larger album projects, Cole mostly turned to other arrangers like Billy May or Gordon Jenkins. On the flipside, Riddle worked with Frank Sinatra for many of Sinatra's larger album projects for Capitol Records. The singles that Nat and Nelson worked on were all new songs.

Nat King Cole was the rare singer that was good despite his material, and Nelson Riddle was the same way. The songs they turned into hits were not great or enduring numbers. They were not tried and true standards of Cole Porter or Harold Arlen, but rather, little pop tunes often by forgotten songwriters. These songs, like "Night Lights," "I Just Found Out About Love" or "To The Ends Of The Earth," were made into lasting art simply by their association with Nat King Cole and Nelson Riddle.

Some of the Riddle/Cole collaborations became Cole's signature songs in the 1950s. Riddle provided the backing accompaniment to Cole's renditions of the Bob Haymes standard "That's All," which Cole introduced to the world in 1953, as well as Charlie Chaplin's theme song "Smile," which Cole introduced for the first time with words in 1954.

Nat and Nelson did work together on several LPs. Their first came immediately after "Unforgettable" on a love-song concept album called Nat King Cole Sings For Two In Love. It was a 10” LP at a time when the medium of the long-playing record was fairly new. Two In Love comprised mostly jazz standards by George Gershwin, Richard Rodgers, Harold Arlen and others. They remade it a few years later in the 12" format, but it was the only album of standards that Cole and Riddle worked on together.

After 1954, taking jazz standards and arranging them into a concept album became the territory of Riddle’s other collaborator, Frank Sinatra. Nat and Frank were labelmates of Capitol Records, and they had an unspoken agreement to not compete with one another.

Riddle didn’t only arrange Cole’s vocal projects. Nat King Cole was a gifted jazz pianist, and in 1956, Riddle was brought in to write orchestral arrangements for an album called The Piano Style of Nat King Cole. Cole’s piano playing was bright and punchy, usually marked by a single-line melody in the right hand. His singing on the other hand was warm, smooth, and inviting. In both cases, Nelson Riddle provided the right combination of strings and horns to get out of Cole’s way and let him shine.

Towards the end of the 1950s, Nat King Cole and Nelson Riddle did collaborate on three more albums. The first came in 1958, during a year where Cole recorded seven LPs, dozens of singles, and worked on two films.

The first LP from that banner year was the soundtrack of the film St Louis Blues, a biopic about the legendary blues composer W.C. Handy. Cole starred as Handy in the film, and performed the W.C. Handy songs on the album. It’s one of his best albums from this era, because it shows Cole going back to his blues and jazz roots, while still combining them with his new, more conservative ballad-singer persona.

The next big Riddle-Cole collaboration came later that year on the album To Whom It May Concern. It was an album of all brand new songs, mostly ballads. Riddle usually left the swinging jazz standards for Sinatra. However, one song on the album seems like it could have been plucked straight off a Sinatra album, and that was the Marvin Fisher and Jack Segal tune “Can’t Help It.” It has a bluesy swing to it with some great material for the saxophone and horn sections from Riddle. Cole feels so at ease with this kind of material, it makes you wish he had recorded an album like Sinatra and Riddle’s classic Songs For Swingin’ Lovers.

The next Nat and Nelson collaboration came in 1960, and like their first album together, it was a concept album. But rather than a loose collection of love songs like Two In Love, their 1960 album Wild Is Love was a song cycle. It was collection of songs all by composers Ray Rasch and Dotty Wayne that tells a story about the search for love from start to finish. It was an ambitious project that included Cole’s narration between songs as the thread through the story.

Sadly, it would be the last collaboration between Nat and Nelson. Riddle ended up focusing his attention on Sinatra and on his own career as a film and television composer, and Cole decided to work with Ralph Carmichael, someone who could give him his full attention. As with all things between Cole and Riddle, the relationship ended amicably, and the two remained friends until Cole passed away in 1965.