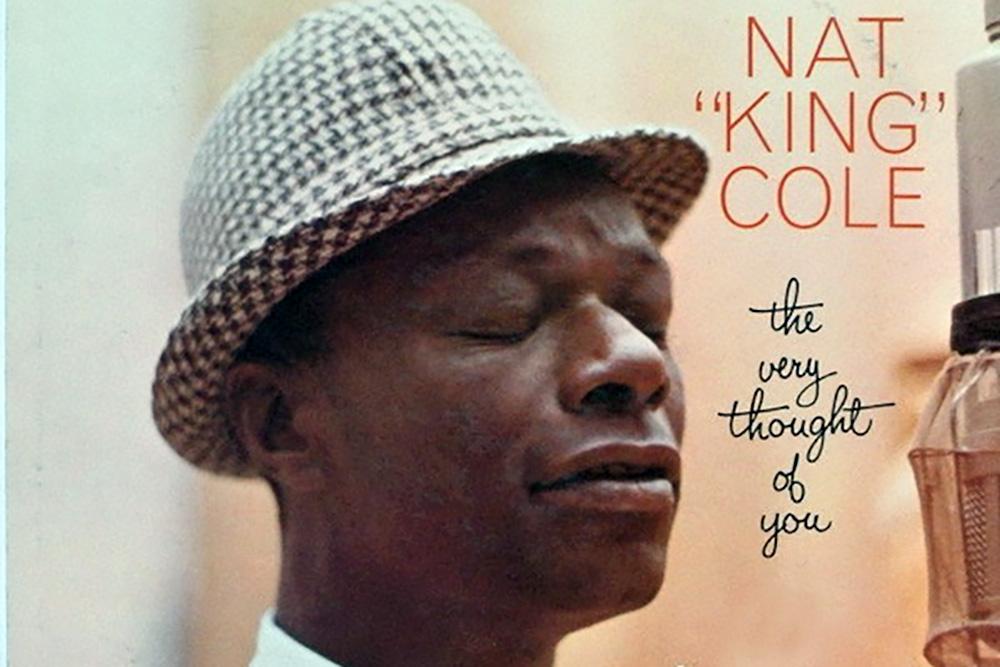 Nat King Cole’s 1958 album “The Very Thought Of You” was an album of all love songs, arranged by Gordon Jenkins (Photo Credit: Album Cover)

This week, I bring you the second show in honor of the great Nat King Cole, who would have turned 100 years old this month. Last week's show was about Cole's rise to stardom throughout the 1940s. On this show, I want to focus on a single year in the singer's life: 1958. Jazz writer Will Friedwald has highlighted this year as one of the most remarkable and productive of any musician. It was the year after Cole's television show was cancelled, but a year where Cole proved that he was undeterred. In 1958 alone, Cole recorded over 100 different songs on seven LPs, including love songs, blues songs, swing tunes, spirituals, and even an album all in Spanish. I feature some of the highlights from this banner year on this program.

By all accounts, 1958 should have been a bad year for Nat King Cole. Less than two years before, Cole had been violently attacked on stage by a group of white supremacists while on tour in Birmingham, Alabama. He was still reeling from the attack at this time, and now it was coming from all sides. Thurgood Marshall, then the head of the NAACP, criticized Cole for not speaking out strongly enough against the racist white attackers, calling Cole an Uncle Tom. This alienated Cole from much of his black audience.

To make matters worse, in December of 1957, Cole's NBC television program, The Nat King Cole Show, was cancelled. It ran for only a year. Cole was the first African American entertainer to host his own television show, and friends like Ella Fitzgerald, Harry Belafonte, Sammy Davis Jr, and Eartha Kitt appeared on the show. The show was a success, but most advertisers were afraid of supporting a show led by a black singer. Without any national sponsorship, NBC pulled the plug. Nat King Cole remarked that "Madison Avenue was afraid of the dark."

But Cole was resilient. Instead of wallowing in self-pity, Cole set to work in 1958, performing and recording more than he ever had in his career thus far.

An early success in 1958 was the film St. Louis Blues, made the year before but released in April 1958. It was a biopic about the blues pioneer W.C. Handy, and Cole starred as Handy in the film, performing his songs alongside other African-American stars like Pearl Bailey, Eartha Kitt, Ella Fitzgerald, and Mahalia Jackson.

The film was a bit of a flop. But what Cole lacked in acting skills, he more than made up for in musical skills. The album that resulted, recorded in January 1958, featured some of his best work with arranger Nelson Riddle. Cole is equal parts soulful and refined, adapting the sounds of his roots in the Chicago blues to a more nuanced pop style. On the album, he recorded a number of W.C. Handy songs, including "St. Louis Blues" and "Memphis Blues."

Nat King Cole's follow up to this album, recorded in February 1958, brought him south of the border. The album Cole Espanol was one of the first albums by a North American star aimed directly at the Latin American audience. The idea came from his Honduran-born manager Carlos Gastel, who wanted to capitalize on Cole's growing international fame.

Cole didn't speak a lick of Spanish, and had to learn the lyrics phonetically. Cole Espanol was a huge hit, making Cole a star in Latin America. Notable songs from the album include the Cuban rumba "Quizas, Quizas, Quizas" by Osvaldo Farres (known in English as the tune "Perhaps, Perhaps, Perhaps") and the Mexican cha-cha "Cachito" by songwriter Consuelo Velázquez.

Love Is The Thing

In May 1958, Nat King Cole was joined in the studio by arranger Gordon Jenkins. The two had worked together two years earlier on the love-song album Love Is The Thing, which featured such Nat Cole classics as "Stardust" and "When I Fall In Love." Their 1958 album The Very Thought Of You was very much along the same lines, featuring love song standards by Harry Warren, Jimmy Van Heusen, and others.

Jenkins' arrangements on songs like "But Beautiful" and "For All We Know" were full of lush strings - sentimental, but never overly so. Cole's vocals are superb. His voice had fully matured by 1958, and was full of the warmth and romance that became a signature part of his style in his later years.

Welcome To The Club

Cole's next album that he recorded in 1958 was actually not released until 1959. In fact, the singer recorded so much in this calendar year that it took three years for Capitol Records to release all of the material. In July, he recorded the album Welcome To The Club which was an album of all swing tunes arranged by Dave Cavanaugh.

The band that Cole and Cavanaugh worked with was essentially Count Basie's Orchestra, minus the Count. Conflicting record contracts-Cole was on Capitol, Basie on Roulette-made it difficult for the two to work together officially. So Basie's band is uncredited. Pity the session pianist Gerald Wiggins, who had to fill in for one of the greatest jazz pianists ever Count Basie, while accompanying one of the other greatest jazz pianists ever Nat King Cole.

The album is full of excellent up tempo swing numbers, including "The Late Late Show," "Avalon," "Mood Indigo" and "I Want A Little Girl." Many jazz and pop singers worked with big bands like Basie's or Duke Ellington's in the late 1960s and beyond. It's a shame that Cole passed away prematurely in 1965, because it would have been wonderful to have heard him perform more swing tunes like these.

To Whom It May Concern

Between June and August of 1958, Nat King Cole recorded another album with Nelson Riddle, this time recording all new songs, not jazz standards. The album was called To Whom It May Concern. The songs were mostly written by young songwriters like Marvin Fisher, Johnny Burke, and Sammy Cahn, but Cole himself also contributed a song to the album.

The title track of "To Whom It May Concern" was co-written by Cole and his sister-in-law Charlotte Hawkins. The song takes the form of a love letter written as a professional correspondence, and I'll play it for you now.

Every Time I Feel The Spirit

Nat Cole's next venture in 1958 was perhaps his only blunder of the year, even though in theory it should have been his most interesting. In September, Cole teamed up with the First Church of Deliverance choir in Chicago to record an album of traditional spirituals, like "Ain't Gonna Study War No More," "Go Down, Moses" and "Nobody Knows The Trouble I've Seen."Cole's father Edward Coles was a preacher in Chicago, so these songs were certainly close to Nat.

However, the production seemed rushed, and the accompaniment of nothing more than choir, organ, and light drums-while traditional in the Gospel world on a typical Sunday-seems lacking in the studio.

Tell Me About Yourself

Between all of these recording sessions in 1958, Nat King Cole continued to tour. He performed in Las Vegas, in Chicago, and at the Copa in New York. He also co-starred in the film Night Of The Quarter Moon alongside Julie London, which was released the following year. And he spent lots of time with his family and at the ballpark, watching the L.A. Dodgers play.

In November 1958, he stepped into the studio yet again to round off the year. In the course of six sessions which lasted just over a week, Cole recorded 27 songs. Half the time he spent with conductor and arranger Dave Cavanaugh, recording the songs for the album Tell Me About Yourself, which wouldn't be released until 1960. This album featured songs like "The Best Thing For You (Would Be Me)" and "I Would Do Anything For You."

The other half of the time, he spent with his longtime partner Nelson Riddle. Some of the Cole-Riddle songs were later released as singles, while others remained in the vaults, released at various points after Cole passed away in 1965. Some of these Cole-Riddle songs, like "Something Happens To Me," didn't actually see the light of day until over 50 years later.

In addition to these seven LPs, Cole also spent time in the studio recording singles. One of his biggest singles from the year was "Non Dimenticar" or "Do Not Forget," an Italian song recorded in August 1958 featuring an arrangement by Nelson Riddle.

His most successful single, however, was perhaps a little out of his comfort zone. The song "Looking Back" was really an R&B song, with a dash of early rock and roll (this was 1958, after all - the year of "Johnny B. Goode"). Cole had previously recorded a few R&B and early rock 'n' roll singles, like "If I May" in 1954 and "Send For Me" in 1957, both of which became hits for him.