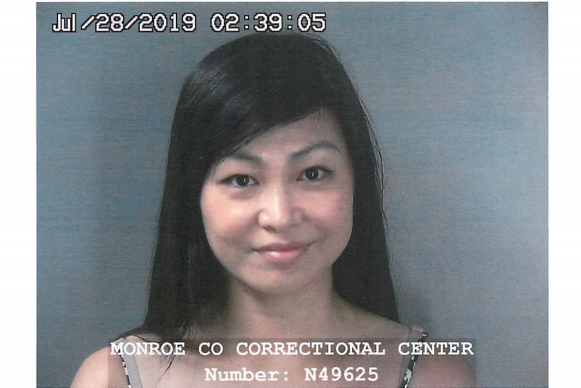 An Indiana University professor was arrested after protesting a vendor at the Bloomington Farmers' Market Saturday.

Cara Caddoo was arrested on misdemeanor charges for allegedly causing a disturbance in front of the booth belonging to Sarah Dye and Doug Mackey. The couple, who run Schooner Creek Farm, have been tied by some to white supremacist groups.

The City of Bloomington said last month it would be a free speech violation to remove them from the market.

According to video taken at the scene, Caddoo was holding up a sign near Schooner Creek’s booth that said she had been harrassed by Dye and Mackey.

Bloomington Police Officers approached Caddoo and told her the Bloomington Parks Department did not want her on the property. An officer is heard on the video advising Caddoo to leave the market, or face arrest.

Caddoo declined and was led away in handcuffs. Several people surrounded the police and shouted obscenities at them for taking her into custody.

Caddoo, a history professor at IU, was taken to the Monroe County Jail and released without having to post bond.

“I’m mad as hell,” a protestor who calls herself “Smoove” says.  “I mean, why do you need 10 officers to arrest a peaceful protestor?”

Grodner declined comment and says he’s advising Caddoo not to speak to the media.

In his letter, Grodner wrote that there were several other people near the booth harassing Schooner Creek protestors, and they were not arrested.

The letter also said Schooner Creek’s presence at the market is bringing elements that are causing customers to feel threatened and unwelcome at the market.

Gary Weddell, of the group called “Indiana 3%,” says he came to the market to make sure Dye was not being harassed.

He says he spoke to Dye at the market Saturday, and while he doesn’t agree with her views, he doesn’t think she should be intimidated for having an opinion.

“I’m here to see that she can be able to conduct business without intimidation,” he says.

We have edited profanity out of this video.