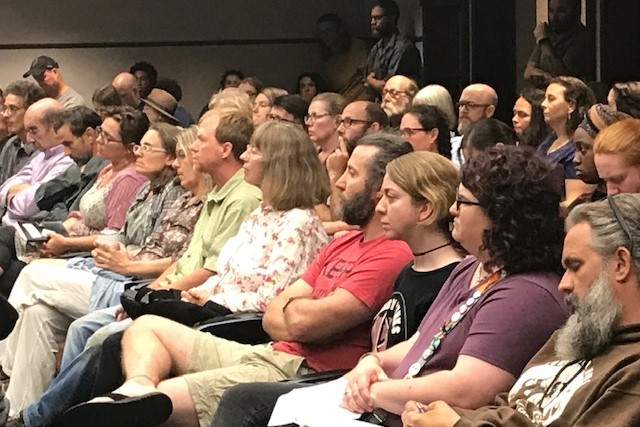 Tensions flared at a Bloomington Farmer’s Market advisory meeting over how to deal with a vendor with alleged ties to a white supremacist group.

It’s unlikely the city will take any action against the vendor.

Bloomington Mayor John Hamilton told a packed room at City Hall Monday night the city won’t tolerate vendor displays or behaviors that are inconsistent with a welcoming environment at the farmer’s market.

“On the other hand, we must also comply with the United States Constitution’s First Amendment, which prohibits governments from restricting individual’s rights to believe and speak as they choose," he says.

The uproar began several weeks ago when transcripts from an FBI interview with Nolan Brewer were published.

Brewer, a self-described white supremacist, pleaded guilty to vandalizing a synagogue in Carmel last year.  He told agents he communicated with Sarah Dye, a Brown County woman who has a booth at the Bloomington market.

Dye’s name has also been linked to a white supremacist website.

Bloomington resident Jada Bee says the city needs to take a stand by removing Dye from the market despite the legal risks.

“We say no platform for racists, no platform for white supremacists," she says. "Yes, that might mean they lose their livelihood, and I’m sorry for them, but maybe try not being a racist.”

WFIU visited Dye at her home recently, but she would not talk about the allegations.