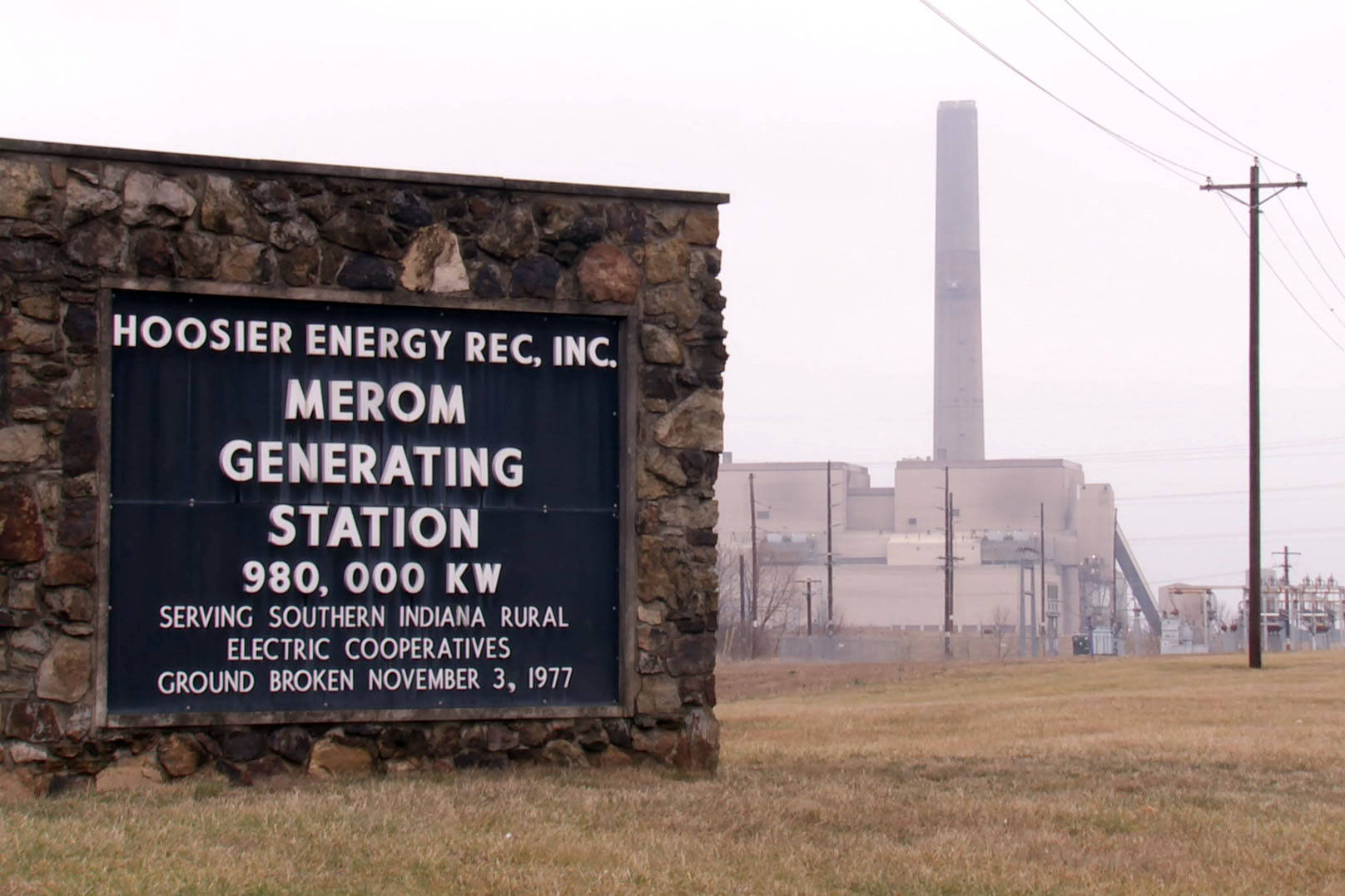 Indiana has 16 coal-fired power generating stations. Each can produce at least one megawatt of electricity.

The plants are scattered around Indiana, with a majority located in the southern half of the state.

The smallest eight don’t produce much electricity, while the top eight generate a majority of the state’s power.

The Merom Generating Station is the fifth-biggest power plant in Indiana, producing almost 6 million megawatts of electricity in 2018. But it’s closing in 2023.

That’s put Doug Childs in a bit of a situation.

“My grandfather was a coal miner,” he says. “And I literally worked in a coal plant in Ohio. So, you know, they're near and dear to my heart.”

Now CEO of the Utilities District of Western Indiana-Rural Electric Co-Op, Childs, much like the state itself, is at a crossroads. After almost 25 years of working with municipal utilities, Childs is now faced with an energy future that will rely less on coal than it ever has.

“Really what's happening is the economics of the whole power business have changed so much that generating power by coal is just not the cheapest way to go, by a long shot,” Childs says. “So really, it's just sheer economics have really caught up with Merom. And really, it's catching up or has caught up with virtually every coal plant in the country.”

Recent developments in the coal industry have changed the outlook on coal. Tougher federal environmental regulations, market forces and advancing technology have made coal more expensive than other forms of energy.

“What’s happening [is] the market is responding to the economic signals they have, and really regardless of what happens, coal is just too expensive right now to be a viable generating source anymore,” Childs says.

According to the U.S. Energy Information Administration, Indiana is the second-largest coal consumer in the country, after Texas. And it ranks third in coal consumption for electricity generation behind Texas and Missouri.

“Indiana has enough coal, according to the Geological and Water Survey, to power us for another 500 years using today’s technology,” says Bruce Stevens, president of the Indiana Coal Council.

Improvements in sustainable energy are making it more reliable. And natural gas is the cheapest it’s ever been.

“Things are changing everywhere. A lot will depend on what happens next November,” says State Rep. Ed Soliday (R-Valparaiso). “When I came in the legislature, natural gas was over $14 a therm. Last week it sold for under $2.”

But old habits die hard. The state is drafting a long-term energy plan, and many in the coal industry are concerned with the reliability of other energy sources, which is why Soliday is pushing for a bill that would make it harder for utilities to close a coal plant.

“Whether that’s coal or rabbits on a treadmill, we need the lights to come on when we flip the switch,” Soliday says. “We’re in transition. It’s not the first time, won’t be the last. But we’re in transition and all we’re asking is to be able to manage it.”

The Indiana Utility Regulatory Commission would have to review possible coal plant closures beginning now through May 2021 and determine whether the closure is what they consider “reasonable.”

“They’re going to be able to power your factories more reliably and less expensively, generally speaking right now, than alternative energy sources,” says Tim Slaper, the co-director of the Indiana Business Research Center. “And I think that’s one of the ripple effects that people – they need to think about in terms of making too rapid a transition from where we are now to the future. And I say that because if the cost of energy in our state goes up by 20 percent but it stays the same in Kentucky and Ohio, then suddenly we’ve lost the competitive edge in terms of citing manufacturing plants or expanding manufacturing plants here.”

Environmental groups and even the NAACP have spoken out against the bill, saying it props up the coal industry and would disproportionately harm communities of color. But those in the coal industry say keeping coal plants around protects Indiana’s energy supply and helps ratepayers.

“The energy module of the future – it may not be wind and solar, it may be something entirely different,” Stevens says. “But we don’t want to put forth policy decisions that’s going to drive the cost of electricity up substantially during that period before that’s available.”

Childs says that won’t be the case – consumers won’t see their rates increase, which would happen if the utility continued to rely on Merom and its coal-fired units.

“The idea was if you built wind and solar, you had to build a natural gas plant to back it up,” Childs says. “And frankly, you still do to some degree, but eight, 10 years from now, you’re not going to have to do that.”

He says it’s possible customers could even see a small savings starting around 2023, with larger savings possible 10 to 15 years down the road.

“Last year, Merom only ran at a 58 percent capacity factor,” Childs says. “And there were three months that Merom didn’t run at all – the lights stayed on. Certainly, reliability is always a concern, but we can run a reliable grid without Merom, certainly easily.”

He says advancing without coal is going to take some planning, but the Merom site will most likely be reused.

“There’s a tremendous amount of transmission capacity available there, which you could imagine,” Childs says. “I could definitely see possibly developing solar, a large solar field at that site. So, that site – Merom’s very valuable and will definitely be reused.”

NIPSCO and Indianapolis Power and Light have announced they’ll wean themselves off coal within the next two decades, so the number of coal plants in the state will continue to drop.

The house bill that would make it harder to close coal plants is heading to the Senate for consideration.