Indiana Utility Hopes To Be Mostly Wind, Solar Powered By 2028 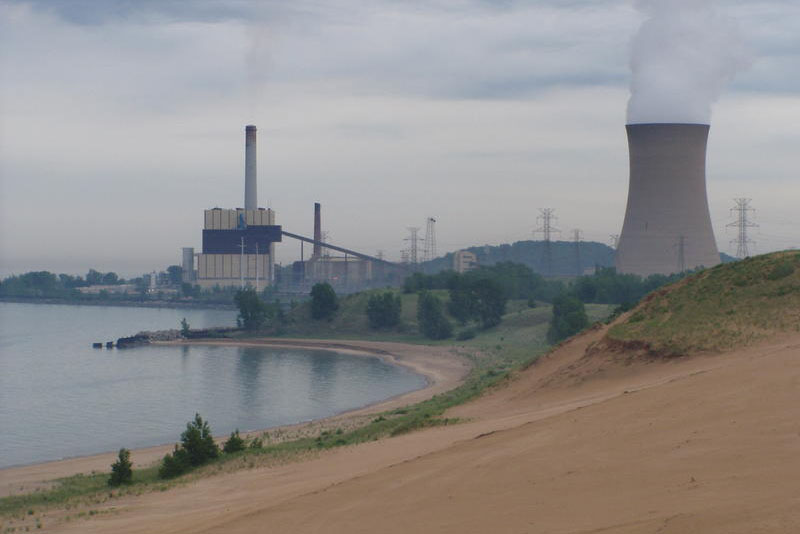 The power plant on the left is NIPSCO's Michigan City generating station, which the utility now plans to close by 2028 (Chris Light/Wikimedia Commons)

The Indiana utility NIPSCO wants to move from about 65 percent coal-powered to mostly renewables by 2028. That’s a big shift for NIPSCO, but it’s hard to say if other Indiana utilities will follow suit.

Its director of communications, Nick Meyer, says cost was a major factor in the company’s decision to move toward wind and solar and away from coal.

“You avoid that fuel cost and not to mention these are aging facilities that are within our fleet and so you don’t have the upkeep and operating and maintenance costs associated with those plants,” he says.

The utility has also decided to retire its five remaining coal units early. The ones at the R.M. Schahfer Generating Station in Wheatfield would close by 2023 and the Michigan City Generating station in Michigan City would shutter by 2028.

NIPSCO expects the move to mostly renewables would cut carbon emissions by 90 percent in the region they serve. Meyer says NIPSCO also found that renewables would likely be cheaper than natural gas.

Though the change would initially increase residents’ bills by about $11, the utility says it would save customers more than $4 billion in the long run. Meyer says if the plan is approved, customers should see their bills start to drop again as soon as it retires its first set of coal units in 2023.

Indiana Energy Association President Mark Maassel says as prices drop, he expects to see more renewables in utilities’ energy mixes. But will others go majority renewables? Maassel’s not so sure.

“I think what it is is a reflection of a utility that’s in a unique position,” he says.

Maassel says every utility is different and there are many factors that go into a utility's long-term plans, including safety and reliability. As for NIPSCO, he says more than half of its electric sales go to a few large industrial customers. NIPSCO also has more natural gas production than some Indiana utilities.

Vectren plans to replace its retiring coal plants with natural gas and have about 8 percent renewables by 2036. Duke Energy still plans to generate almost half its electricity from coal by 2035, only increasing renewables by 7 percent.

While Indiana Michigan Power doesn't have much in the way of renewable energy now, it expects to have about 32 percent renewables by 2035. Though the majority of it's energy would still come from coal.

Though it's important to note that Duke Energy and Indiana Michigan Power are in the process of creating their latest Integrated Resource Plans and expect to finish them next year.

Meyer says NIPSCO will rely on battery storage, its natural gas plant, and the market to ensure the utility is reliable when the sun isn’t shining and the wind isn’t blowing. NIPSCO’s proposal must be approved by the Indiana Utility Regulatory Commission.