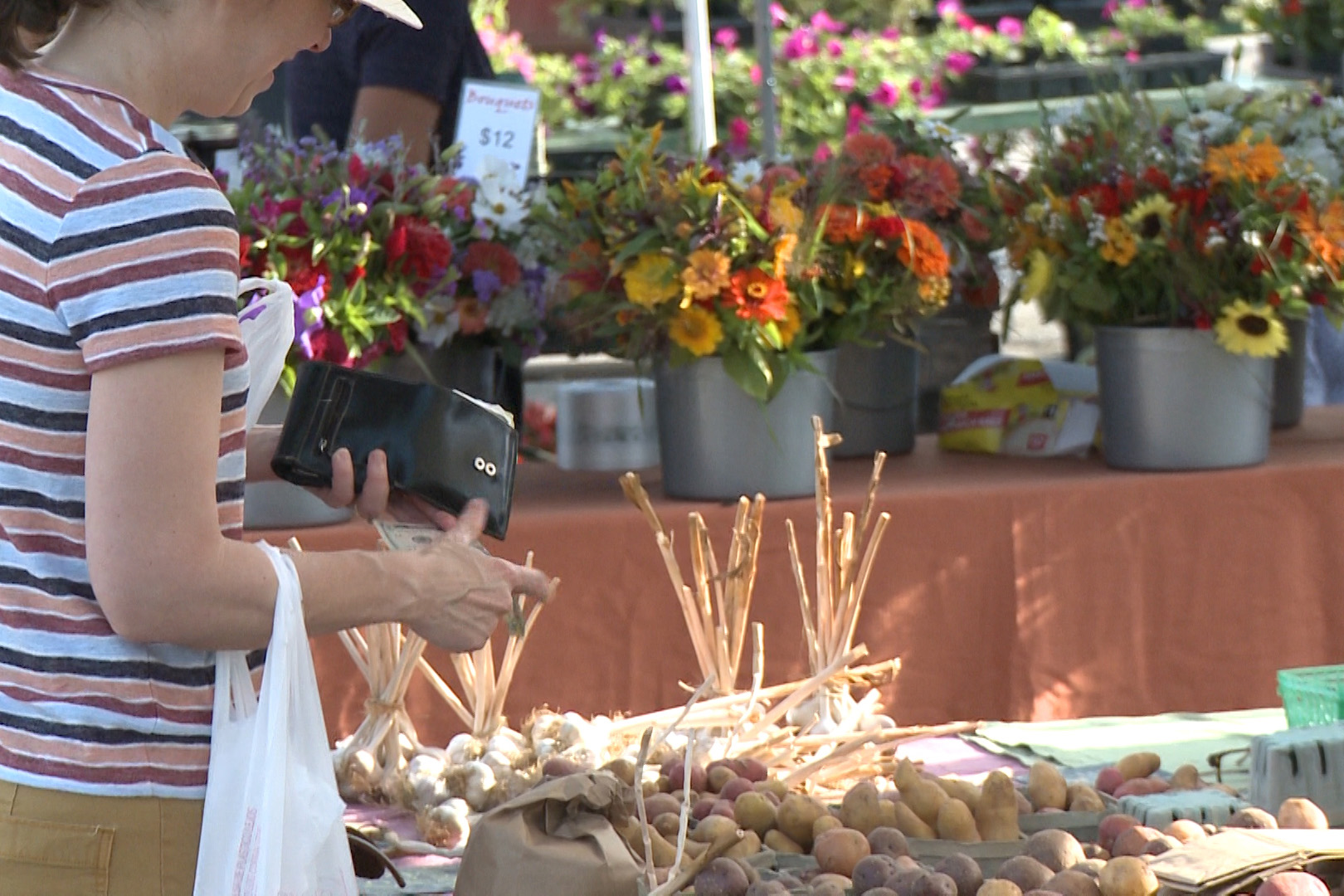 Bloomingfoods is hosting a temporary market for some vendors during the suspension of the regular market. (Adam Pinsker, WFIU/WTIU News)

Black Lives Matter Bloomington wants the city to remove Schooner Creek Farm from the farmers' market because of alleged white supremacist ties, and relinquish control of the market to a private group.

Those are among several recommendations the group's core council makes in a letter it sent to several city leaders this week.

The letter says while the issue of racism goes far beyond the market, removing Schooner Creek is a small step toward making the community safe for everyone.

"Both the mayor and the Farmers' Market Advisory Committee have spoken about diversity and inclusion as true Bloomington values," the letter says. "Now, BLM wants the city to put actions behind those words."

Bloomington Mayor John Hamilton has said removing Schooner Creek from the market would be a free speech violation and could open the city up to a lawsuit.

BLM says in its letter the city can get creative to boot the vendor from the market, along with anyone else who has white supremacist ties.

And, it wants the city to relinquish control of the market to a private organization.

" ... in light of the city's utter failure of stewardship, the market needs to be turned over to a group that can ensure its healthy continuation as a safe and welcoming place for all members of the Bloomington community," the letter says.

The group also says Hamilton needs to point police at the right targets, referring to the arrest of a protestor during the July 27 market.

Video taken at the scene shows Cara Caddoo was holding a sign up near Schooner Creek's booth that said she had been harassed by its owners, Sarah Dye and Doug Mackey. Police arrested her after she refused to leave the property.

The city released information in June clarifying where people can protest and distribute information while at the market. The Rules of Behavior state neither are allowed on the blacktop area where vendors are setup.

The same weekend of the arrest, a group called the Indiana Three Percent congregated near the Schooner Creek booth to ensure Dye wasn't being harassed.

"Words are cheap, and it is hard for the mayor to claim he values diversity and inclusion when his law enforcement officers detained, threatened, and in one case, arrested non-violent protestors of color while granting a wide berth to a white supremacist militia who menaced market goers," the BLM letter says.

The group suggests the city change its policy about signs at the market.

It also asks for a commission to study diversity and inclusion at the market.

The city is asking for public feedback on how to move forward with the market as it prepares to reopen it Aug. 17. Hamilton suspended the market for two weeks starting Aug. 3, citing public safety concerns.

Residents can share their thoughts on the market by filling out an online comment form, filling out a comment form in the atrium of city hall or contacting the mayor's office. The city says it will use that feedback to help come up with solutions for addressing issues arising at the market.

Hamilton will host a Facebook live discussion Monday about the market, and will announce plans for reopening it Tuesday.

Bloomingfoods is hosting a temporary market for some vendors at its eastside location Saturday.

Schooner Creek has repeatedly declined or not responded to our requests for interviews.