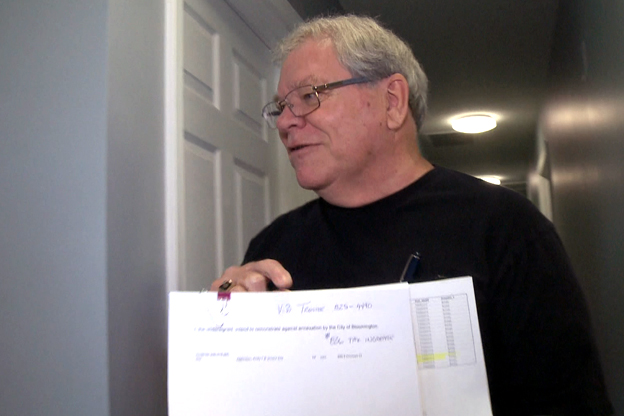 Bloomington’s annexation proposal now moves to proceedings next week as city council decides whether to accept, limit, or revoke any of the eight areas under consideration.

The remonstrance period that takes effect after council’s vote could get interesting.

“We had something in the order of 70 or 80 commenters," Hamilton said. "So that's out of about 14,000 people who are affected potentially by the annexation. So it says that, obviously, the vast majority of people did not weigh in on that.”

But not if Monroe County resident Don Creek has anything to do with it. He’s been going door to door gathering signatures to stop the annexation, and he says the overwhelming majority of people he’s met are against annexation.

“I can’t stress that enough. I mean I run into two people who work for the city, and one individual that thought maybe there’d be some money for the arts – he hadn’t made up his mind yet,” Creek said.

Creek lives in the area described as western area 1 A in the annexation proposal and is working with the Van Buren Township office in getting addresses and current data.

But there’s a catch.

Certain properties have annexation remonstrance waivers associated with them – these are essentially agreements property owners signed that prohibit them from challenging annexation in exchange for city services, such as water and sewer. Many of the waivers date back years, and still stand even if the property changes hands.

But in 2019, the Indiana legislature put a 15-year cap on those waivers. That means any waiver prior to 2006 is invalid – according to the state law.

The city has identified 3,200 parcels that would be subject to those waivers. That’s about half of the total number of parcels up for annexation. But the city’s annexation waiver database doesn’t delineate the invalid waivers.

I spoke with Mayor Hamilton about this on a recent episode of “Ask The Mayor:”

Hamilton: The vast majority of these areas that we're proposing to annex were intended for annexation. Now the state took this step what we think is actually illegal and unconstitutional. You've heard that from us before and we hate to have to do that. But we were right the last time and we think they've illegally interfered with that agreement by saying, well, you can't enforce that agreement, even though we did our side of the bargain.

Hren: Isn’t that misleading though no matter what you think, to not follow the 2019 law and have those invalidated waivers listed?

Hamilton: I don't think it's missed - I mean, we're just sharing what the waivers are. There is a dispute about the effect of the law, but they're waivers. They're in existence, and we're just reporting what they are. I do think it'll ultimately probably take a court to unpack this. And regrettably, the state legislature has again taken very aggressive steps, in our view, illegal but certainly aggressive to try to stop a city annexation going forward.

Hren: Will the city take the Indiana legislature and Gov. Holcomb back to court if annexation comes down to those waivers you think are unconstitutional?

Hamilton: If it comes to litigation, it's not clear that it would, but if it turns out to be that the status of a certain amount of waivers is a pivotal factor, it will probably end up in court somehow. I don't know exactly how.

The official remonstrance record will come from Monroe County Auditor Catherine Smith’s office. She says she’ll follow the state’s 2019 legislation – or she could be removed from office.

Smith says her office is ironing out the details on how to present remonstration to the public on Friday.

Residents in the approved annexation areas will have 90-days to remonstrate and Smith says she could have results as early as mid-January.

Creek says he’s back going door to door, this time he picked up two street lists since the weather is much cooler.

“To me it’s going to boil down to how crafty was the mayor and his administration in drawing up the lines and deciding how can we draw this up to put the numbers in our favor,” Creek said.

That’s if city council votes to approve any annexation ordinances during proceedings September 15.