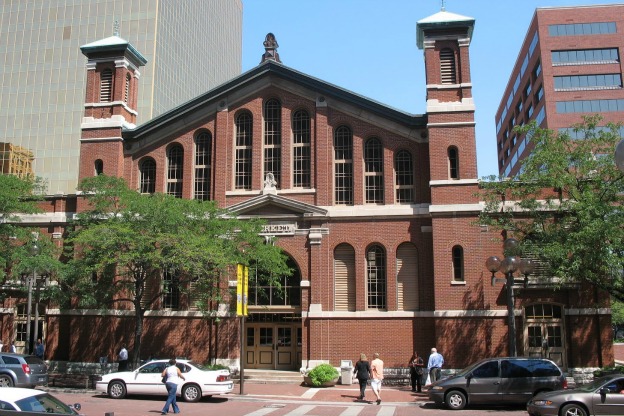 Today, the chefs of many of the best-reviewed restaurants in Indiana boast of their use of local meats, cheeses, vegetables, fruits, and breads. Self-described locavores take pride in eating sustainably produced foods grown within a short distance of their hometown, and all over Indiana every weekend people flock to their local farmers’ market.

Buying fresh foods directly from farmers is nothing new in the Hoosier state, however. The Lafayette Farmers’ Market can claim its beginnings in 1839 on the town’s courthouse square, although there are few remaining records of that first “Market House.” By the mid-1840s, the city built a block-long, multi-story market building with vendor stalls and easy access for the public. Today, the historic building still hosts Saturday markets from May through October.

Beginning in 1911, residents of South Bend flocked to a farmers market set up by the Colfax Street bridge. The popular market was open year-round, three days a week, and by the early 1920s, it hosted more than 100 sellers and thousands of customers every business day. Twice in the decade, the market had to move to larger quarters. It remained open throughout the century, and after a 1970 fire that damaged a portion of the now-aging structure, emerged in 1972 in a new building that remains a destination for residents of northern Indiana.

Since the late nineteenth century, residents of Indianapolis have also been able to shop for fresh food when working or visiting the city’s downtown. The original 1821 plat for the new state capital called for a market building near the center of the city, but it was not until 1886 that the current brick structure rose up on Market Street just one block from the Circle.

From 1886 to 1958 the Market building and Tomlinson Hall just to the west were filled with vendors selling meat, fruit, and vegetables. After Tomlinson Hall was demolished, the Market building gradually fell into disrepair until a renovation in the mid-1970s, part of an overall program to revitalize downtown Indianapolis. The success of the City Market has been mixed over subsequent decades, but another round of renovations in the early 21st century has kept alive the tradition of the farmers’ market in the state capital.

Farmers’ markets can now be found in all corners of Indiana, and perhaps in the 22nd century many of the current markets will still be thriving and will take their places in the history of Hoosier culture.