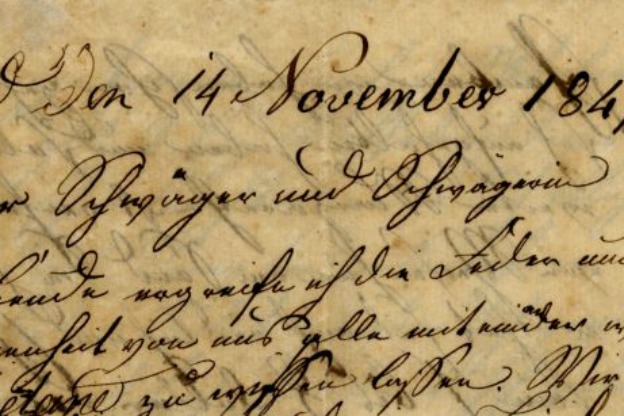 Jacob Schramm shared the trials and triumphs of farming life in Indiana in the 1840s with a correspondent back home in Germany.

Many European immigrants to 19th-century America continued to write faithfully to their friends and families in Europe. Sometimes the letters painted a glowing picture of life in America; sometimes the letters reflected disillusionment and a desire for the Old World. One letter written by a German immigrant to Indiana provides a particularly detailed and interesting look at the challenges of farm life in a state still with inadequate transportation networks and still staggering under recent financial failures.

Jacob Schramm and his family moved to the United States in 1835, and Schramm bought a farm in Sugar Creek Township in Hancock County. In 1842, in a letter written to a friend still living in Germany, Schramm provided a realistic look at the difficulties and the benefits of farming life in Indiana.

Schramm had cleared a 100-acre farm, with a house, a barn, and a small orchard. He admitted, however, that in the first several years, “we had to buy nearly everything we needed for ourselves and our livestock and get it here under the most terrible conditions, of which you can have no conception.”

One challenge was the swampy land: “Even after it was cleared one could not grow much on it. Drainage ditches had to be built to dry out the fields.” The water also brought “millions of mosquitoes,” which tormented the family as they tried to sleep at night.

Schramm also lamented his inability to transport and sell the products of his farm. He boasted that his smoked pork “tastes better than any I can remember eating in Germany” but with no access to adequate markets within Indiana, much less beyond the state, he would “probably have to throw it away.” The National Road was only 1½ miles away, but had not been maintained and was “nearly unusable.”

But Schramm and his family members were resourceful and hard-working. They learned to make their own clothes, and they ate well from their gardens, orchards, and livestock. Between 1850 and 1852, Schramm built his own private plank road north to the National Road; he could transport his own goods and he also charged a toll to his neighbors. Based on his knowledge of land drainage, during the 1860s he built a drainage tile factory near his home.

Schramm also bought and sold farmland, using some of the profits to invest in a railroad. Over his lifetime, Jacob Schramm became a well-to-do man, but only after many years to hard work and sacrifice as a farmer in early Indiana.