When Melissa Clark cooks, it's 'Dinner in One' 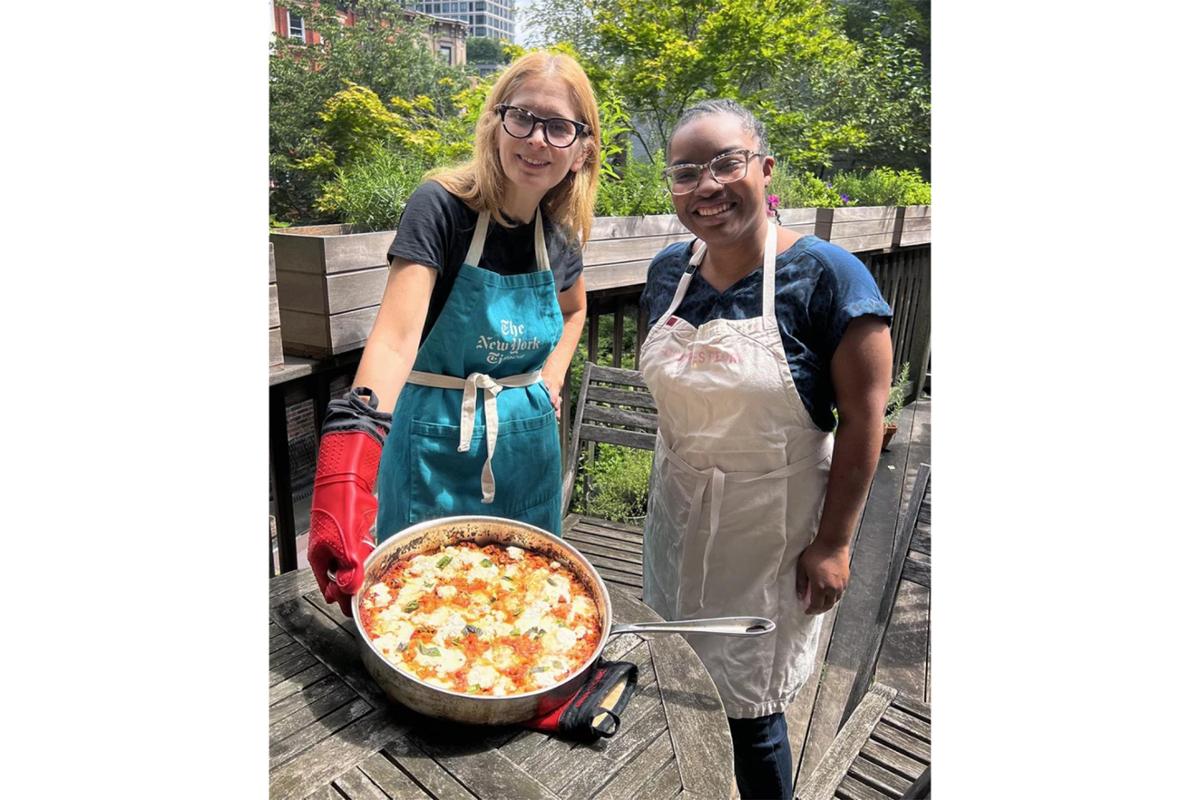 In Melissa Clark's kitchen — which she calls "messy," but is actually beautiful — cooking dinner is fun, not fussy, ideally done while listening to the B-52s, and best when it takes as few dishes as possible.

Clark, whose New York Times column is called "A Good Appetite," has written dozens of cookbooks. In her latest — Dinner in One — Clark offers 100 recipes that can be made in a single container, be it pot, bowl, skillet or slow cooker.

"Imagine like writing a haiku," Clark says. "You want to express the biggest thought with the fewest amount of words. ... The end goal was when I'm finished cooking, there's like three things in the sink."

There are recipes in this cookbook for miso-glazed salmon with roasted sugar snap peas, cheaters chicken and dumplings, even one-bowl cakes.

NPR wanted to put Dinner in One to the test, so Clark chose a recipe to try out: cheesy baked pasta.

"Normally when you make a baked pasta, you boil the pasta in one pot, you drain it in a colander, so therefore messing up two things already," she explains. "But what I'm doing here is I'm going to cook the pasta ... right in the sauce."

Getting all of the ingredients ready

First, Clark lines up all of the ingredients on the counter including pasta, tomatoes, three kinds of cheese, sausage, and spices and herbs from not one but three jam-packed spice drawers.

"Here's another thing," she says, pulling out oregano, red pepper flakes, fennel, garlic and bay leaves. "You can leave half of these herbs out. It's going to taste the same."

That's the thing about this cookbook — it's not one bit fussy, and all of the recipes are flexible. If you want to add vegetables to this dish, Clark suggests tossing in spinach. If you're lactose intolerant, Clark says add more sausage and cut out the cheese. Hate slicing garlic? Use some from a jar!

How she got her start

Before she was the winner of multiple James Beard awards, Clark was a coat-checker and a hostess at a restaurant called American Place. That job was her first peek behind the scenes at a professional kitchen.

"I knew I wanted to be a food writer at that point," she says. "This was right at the beginning of food blogs coming out on the internet. ... And I thought, along with a lot of other people, hey, you know, I want food to be my lens for looking at the world. I want food to be how I tell my story and how I tell other people's stories. ... To really understand someone, to understand their soul and their mind, I really feel like you need to see what they eat."

So what does her soul say?

"Definitely says I grew up in Brooklyn," Clark says. "Especially if you catch me on a bagels and lox Sunday."

For the recipe test, Clark pulls a 12-inch skillet off the wall, adds the olive oil, and the sausage, which she squeezes out of its casing like toothpaste. It drops, sizzling, into the pan. She cooks the sausage until it has a nice, browned crust.

"That brown crust on a sausage is what's going to give you extra flavor," she explains.

Meanwhile, she crushes the fennel with a mortar and pestle and adds that, plus the garlic — thinly sliced, not from a jar — and the other spices and herbs.

"I'm also going to add some salt right now," Clark says. "Because I want the garlic to absorb it. If you add salt as you go, it seasons it better rather than adding it all at once."

She's full of these kinds of cooking gems.

Another example: "If something smells good to you, you'll probably like the taste."

And: "What grows together goes together."

Explaining things — like how thinly slicing the garlic will make it taste sweeter in the dish — is one of Clark's favorite parts of what she does.

"I love talking to people about food and answering questions and figuring out how they're comfortable cooking and how I can make it easier for them," she says. "I really love cooking. I mean, I really do. And I really want everyone else to love it, too."

And it's OK not to cook, too

But don't get her wrong — sometimes she prefers takeout just like everyone else.

Clark pours the tomatoes into the pan, and once that sauce has gotten thick, she adds the pasta. Then she folds in about a third of the mozzarella, plops the rest on top, adds spoonfuls of ricotta, then a little more ricotta and sprinkles the whole thing with Parmesan.

Finally, she sticks the skillet in the oven to bake.

Clark counts how many utensils she used for this dish. The total?

The real test, though, is how it tastes.

When the cheese is brown and bubbling, Clark takes the skillet out of the oven, plucks some fresh basil, and serves the pasta on her back deck, overlooking the garden.

Like a cross between baked ziti and a meaty lasagna, this golden-topped pasta is rich with brawny bits of sausage, creamy ricotta, and crushed tomatoes, all seasoned with plenty of garlic, oregano, and fennel seed. It's a certified crowd-pleaser that's easy to adapt.

1 (14-ounce) can crushed or strained tomatoes

2. In a 12-inch ovenproof skillet or Dutch oven, heat the oil over medium-high heat. Remove the casings from the sausage and crumble the meat into skillet, using a spoon to break it up. Cook, stirring, until it's starting to brown, 5 to 7 minutes.

3. Using a mortar and pestle or the flat side of a chef's knife and a cutting board, lightly crush the fennel seeds. Stir them into the pan along with the garlic, oregano, and red pepper flakes, if using, and cook another 1 to 2 minutes.

4. Stir in the whole tomatoes, using a spoon to break them up. Add the crushed tomatoes, bay leaves, and salt and bring to a simmer. Cook for 10 minutes to thicken it slightly.

5. Stir in the pasta and 1 cup water and return the sauce to a simmer. Cook for 2 minutes, stirring to make sure the pasta doesn't stick to the pan. Remove from the heat, remove the bay leaves, and fold in a third of the mozzarella.

6. Top the pasta with the remaining mozzarella and dollops of ricotta. Sprinkle with the Parmesan. Bake until the pasta is tender when poked with a fork, and the cheese is bubbly and golden, 18 to 22 minutes. (If you'd like a browner topping, run the pan under the broiler for 1 to 2 minutes.) Let cool slightly before serving with black pepper and basil on top, and more red pepper flakes on the side.

You can leave out the sausage entirely or substitute a plant-based sausage.

You can add 8 ounces of sliced mushrooms along with the sausage in Step 2. Increase the cook time until the moisture evaporates from the pan and everything is very browned.