The Forest Floor May Be Untapped Agricultural Land 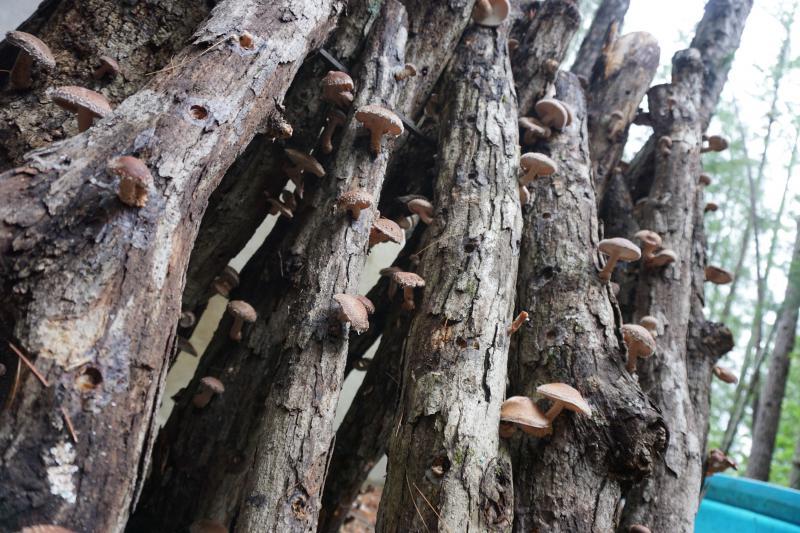 Trees' role in agriculture tend to be viewed as limited to the lumber industry or highly organized orchards to grow fruits, but some farmers are looking to the forest floor to get more people into agriculture, at least part-time.

Dennis Lindberg’s five acres in southern Missouri don’t look like a farm. Amongst the trees on the sloping ground are smatterings of small, green plants. Those are his crops.

“Here’s some ginseng here that I planted,” Lindberg said, pointing to a patch that to the untrained eye looks like weeds. “I’m taking the seed from it and just planting it right in here, so it will spread.”

Lindberg grows ginseng, goldenseal and other plants that prosper in the shade. They are used in cooking, medicines and supplements. He’s one of a growing number of people who are doing small-scale farming in forested areas to serve niche markets.

It’s not quite that easy to make a living, though. Ginseng needs seven years to grow before harvest, and it’s worth more the longer you wait. Lindberg has been forest farming for almost 40 years, and for much of that time he has had another job, raising hogs.

Still, forest farming advocates say it is an underutilized form of agriculture. The challenge is finding the right crops to plant in the right type of forest — and some, like Lindberg, are doing that.

“I think that there are ways that people who are doing this are getting really creative and creating markets and creating interest in these value-added products, especially,” said Hannah Hemmelgarn, assistant program director at the University of Missouri Center for Agroforestry.

The Hellmuth Family, owners of Ozark Forest Mushrooms in Salem, Missouri, grow a special variety of shiitake mushrooms on white oak logs. Instead of building shade shelters, they grow them under a stand of yellow pine trees on their land about 150 miles southwest of St. Louis.

They buy cordwood from local cutters, drill holes in them and place mushroom spawn inside, and let them incubate. For the next three to four years, they can stack the logs under forest canopy, cover them with special blankets and grow the mushrooms.

“These have a stronger flavor, more unique. Also, it’s a different variety, so you’ll see the ones in the store look slightly different,” said Henry Hellmuth, son of the founders of the company. “They are analogous to heirloom tomatoes.”

Ozark Forest Mushrooms harvests between 100 and 500 pounds of mushrooms a week all year round and drives them to St. Louis, where they are sold wholesale to restaurants and specialty grocery stores for $10 a pound and for a couple bucks more at farmers markets.

The farm is profitable in part because they also have a lakeside cabin they rent on Airbnb that is often booked months in advance. It includes a mushroom tour with the stay.

“Not to be too pessimistic, but there are much easier ways to make a living. [As with] any small scale farming operation, you’re going to realize it’s not that profitable of an endeavor. It’s a hard endeavor, seven days a week,” Hellmuth said. “But also some people love that lifestyle, always feeling connected to the work and the land.”

That draw to farm and work with the land may get more people into forest farming, partially because the cost to get into the business is much lower than conventional farming.

Hemmelgarn said a few acres and some basic supplies cost far less than the hundreds of acres and hightech machinery needed to profitably grow row crops like corn or wheat.

But forest farming is still hard work that takes creativity and dedication.

“Keeping trees in the ground, planting trees, thinking about ways with tree landscapes, and making a livelihood or part of your livelihood from those spaces, it’s special,” Hemmelgarn said. “My hope is [that agroforestry is] going to be more part of the agricultural landscape moving forward.”

Another part of the allure to forest farming is the desire to mitigate climate change. Trees and forests absorb carbon dioxide, the dominant greenhouse gas warming the earth’s atmosphere.

The U.S. Department of Agriculture identifies forest farming as a good alternative to supplement income for farmers and other landowners, and the agency provides resources to help forest farmers.

But the agency also stops short of calling it a full-time occupation.