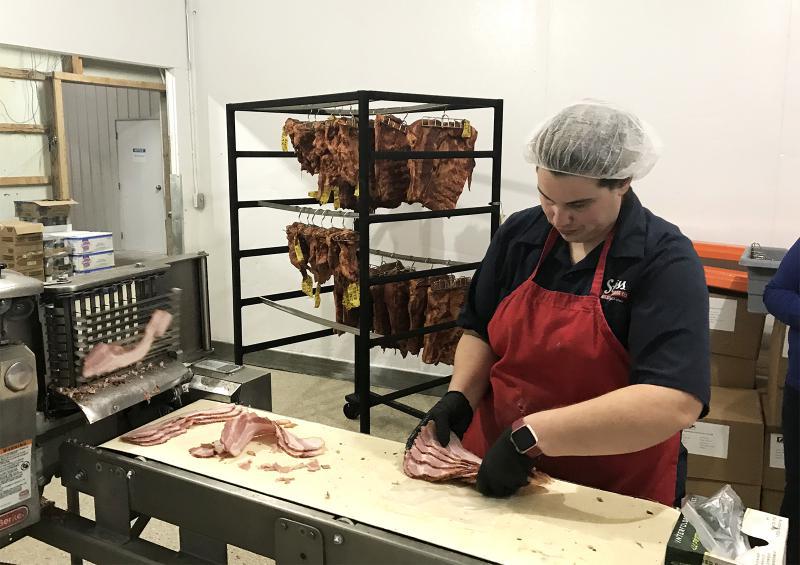 A joint effort by federal and state governments to help small meatpacking plants increase their capacity is encountering some bumps.

Earlier this year, COVID-19 outbreaks as large slaughterhouses and meat processing plants led to temporary closures. That resulted in higher prices and meat shortages at grocery stores, which in turn led some consumers to look at local meat from small, mostly rural processing plants.

While that demand was good for the industry, it also overtaxed the small processors’ ability to keep up.

“We have been told that the earliest processing date for us is Spring of 2022,” said Larkin Busby of DL Farms in Bland, Missouri.

Busby and her husband raise beef, pork and chicken on their 168-acre organic farm. They had to scramble to find new processors and barely were able to get the minimum done.

“Farmers are booking animals for processing that haven’t been born yet,” Busby said. “It’s that bad.”

This is a common story in the Midwest for small processors, the ones that employ 50 or fewer people. And even after the big plants reopened, the backlog on small operations was still there.

States like Missouri and Oklahoma are trying to help. A combination of state and federal efforts has led to millions of dollars being granted to very small meat processors, allowing them to add machines, space and people.

“They are all hoping to expand capacity. And that is their goal. And so we have to get this equipment in and see how much things change,” said Jennifer Lutes, Community Engagement Specialist with the University of Missouri Extension.

Lutes said the response to the program has been strong, but the process is slow. The grant programs are reimbursements, so the processors have to front the money for expansion.

That means very small businesses with little capital are taking out loans and applying for grants, both of which are often new endeavors for the small, largely rural businesses.

But even when a processor navigates the system and gets new equipment, the increased capacity isn’t necessarily there.

Scott Long, owner of Cabool Kountry Meats in Cabool, Missouri, is one of the processors who took federal money. He said he’s ready to add capacity to his 10 employee operations but can’t find anyone to take the four jobs the new equipment created.

“We have had some that’s quit — it wasn’t their cup of tea,” Long said. “Slaughtering or processing beef is not something for everybody, as you can imagine. It takes a special type of individual to do that.”

Long also said what he calls generous unemployment benefits discourage people from taking the jobs that start at $10 an hour but go as high as $16 with experience.

Advocates for rural areas and small meat processing businesses are calling for better pay, training and education to help fill these jobs.

Meghan Filbert, a sheep farmer who is also the Livestock Program Manager for the advocacy group Practical Farmers of Iowa, says the real hang up in the labor market is the image of butchers as a profession:

“Universities and community colleges should offer artisanal butchery courses, which we’re seeing some of that, but open that up to not just college-aged students, but the general public,” Filbert said.

But that will take time. Filbert said the effort would be more successful if small meat processors had a few years to increase capacity. The government is pushing for the changes in a few months because of COVID concerns.

All of this effort to improve the capacity for small processors probably won’t have much effect on meat prices and supply, because even with expanded capacity, small processors are still small.

“There’s only so much they can do right now,” said University of Missouri agricultural economist. “Until you have a lot more of them, which doesn’t seem to be in the cards right now, there’s not much that’s going to change in the near term. You’re still going to rely upon the big packing plants to get things done.”

While making up for shortfalls from the big packing companies was part of the impetus for some of the grant programs, it may not be the real goal or outcome.

“COVID has encouraged consumers to go out and seek local sources that they may or may not have not been aware of previously,” said Missouri Extension’s Jennifer Lutes.

Lutes said if COVID and the grant programs create a more vibrant local meat processing industry, that will be good for rural communities, farmers and the food supply chain as a whole.