Rural Towns Across The Country Struggle To Keep Water Clean 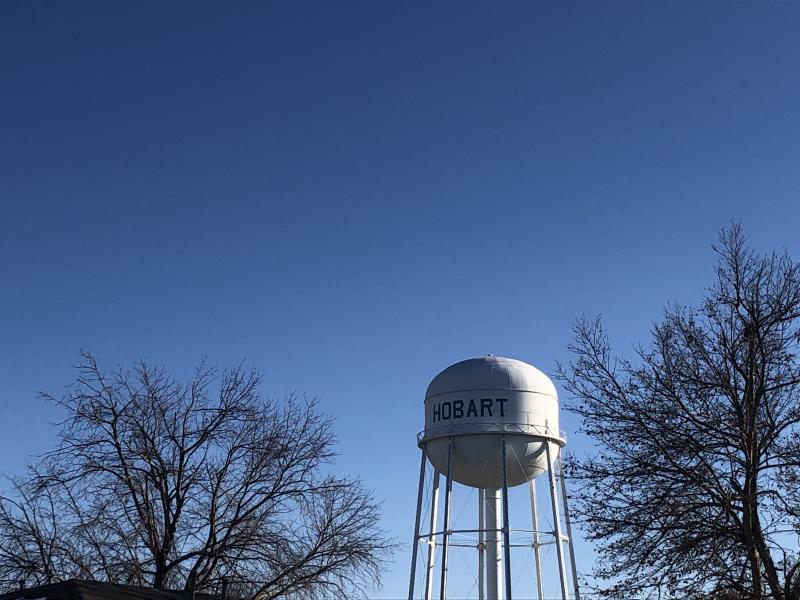 One of several water tanks in Hobart, Oklahoma. The town has been working on making improvements to its resevoir, Rocky Lake, since 2010. (SETH BODINE/ HARVEST PUBLIC MEDIA)

Cheryl LeFevre doesn’t drink the water in Hobart, Oklahoma without a filter. Without a filter, sometimes the water smells like chlorine or rust. Sometimes, it even comes out brown. She has to clean out her filter every two weeks, with what looks like sediment inside.

As she pours water into a glass from her kitchen on a late afternoon in December, the water comes out clear. She says it still tastes like dirty water and has an aftertaste.

“Some days it's like this, you know, clear and just fine,” LeFevre says. “And some days it's got all of that gunk in it.”

Despite the color and smell, a recent Environmental Protection Agency Consumer Confidence Report says Hobart’s water is compliant with agency standards, but many residents, like LeFevre, remain concerned about the quality of the water.

Hobart isn’t the only town facing this problem. Erik Olson, the strategic director of health at the Natural Resources Defense Council, says a lot of small, rural towns across the country struggle to keep water safe.

“They often have a disproportionate number of violations and compliance problems because they don't have the economies of scale,” Olson says. “And therefore, they often cannot afford the treatment that would be needed to remove contaminants of concern.”

The problem is so widespread that The U.S. Department of Agriculture has handed out $891 million in loans and grants to rural towns in 43 states to help update water systems. Olson says the money is a drop in the bucket compared to what’s needed to solve the widespread problem in rural areas. He estimates that it would take about $1 trillion to fix the country’s outdated water systems.

Hobart had even bigger problems about a decade ago. The reservoir where the town received its water, Rocky Lake, was filling in with silt, so the town’s intake pipe was now drawing from the bottom of the lake.

“The taste and odor was just so horrendous that we couldn't treat it,” says Joe Tipton, water superintendent for Hobart.

He says the city is dredging the lake and revamping its water treatment facility. It’s a huge undertaking and has a hefty price tag. It could cost up to $18 million, says Hobart city manager Ashley Slaughterback. Despite this, the water still sometimes comes out brown for some residents like LeFevre. Tipton says it might be due to the aging pipes in town.

LeFevre says she sees improvement charges on her utility bill each month. After 10 years, she’s tired of waiting.

“You know, granted, you've got your sewer and trash and stuff on there as well, but $100 a month! And I have to buy water, and sometimes my dogs won't even drink it,” LeFevre says. “You know, it's frustrating.”

Hobart-resident Cindy Lasiter says she buys about $100 in bottled water each month. She says she doesn’t trust the water because she knows some people who say they have gotten sick after drinking it.

“There are times where you can actually see things floating around in the water,” Lasiter says.
“And then sometimes you get the water out of the tap, and it is so brown or red that you just look at it and go ‘not today.’”

Travis Archer, who works for the water quality division for the Oklahoma Department of Environmental Quality, says the department runs into taste and odor issues frequently in Oklahoma. Most of the time, he says the issue is what the EPA defines as secondary contaminants, minerals or chemicals that don’t threaten health but can affect the taste or appearance of water. These secondary contaminants include iron or magnesium, which often cause discoloration. He says he understands people’s concerns.

“I would feel that same way of the water coming out of my tap was brown or discolored,” Archer says. “But there's no known health impact with those. So they're listed as a secondary standard because of the lack of a health impact.”

Often, contaminated water in rural areas is underreported. According to a 2006 EPA audit, 92% of Lead and Copper Rule health standards and 70% of monitoring were not reported. A report by the Government Accountability Office in 2011 also showed underreporting of violations.

According to DEQ spokesperson Erin Hatfield, there have been 11 complaints filed since 2010 in Hobart. Six complaints found chlorine residual violations, and the city flushed out the area and corrected the problem. Between 2019 and this year, there were three complaints. In one instance, DEQ worked with the city to flush the water and increase the chlorine levels. In another, a line break caused the odor and color issues, and the city flushed the water.

Even when towns get the loans they need, they have to worry about paying them off. Bob Copeland, the city manager of Hollis, Oklahoma, says his town of a little over a thousand people received a mix of grants and loans from the USDA and Indian Health Service to help fix the nitrate violations in the water. While the water is much better now, he worries about the town’s ability to pay the loans in the future.

“Like a lot of small towns, we have a declining population,” Copeland says. “And, you know, we've had to raise our water rates to actually make our loan payments.”

Residents in Oklahoma concerned about their water can file a complaint online with the state’s Department of Environmental Quality. The department has two business days from the time of the complaint to contact the person who complained and three business days to perform a site inspection.