Plans For Agriculture Differ, But That Issue Is Unlikely To Sway The Presidential Election 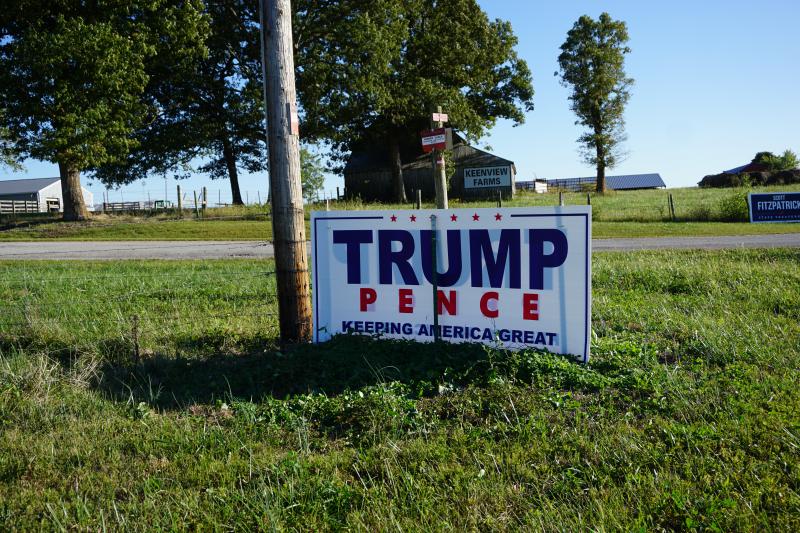 A Trump - Pence sign in rural Missouri, an area where President Trump won overwhelmingly in 2016. Now farmers are analyzing his farm policy and that of his oppoent, Joe Biden, in advance of the Nov. 3 election. (JONATHAN AHL / HARVEST PUBLIC MEDIA)

Farmers are looking closely at what they might be able to expect from four more years of Donald Trump versus a Joe Biden administration, but they aren't finding a lot of solid answers. And any difference may not matter, anyway.

To evaluate Donald Trump’s agriculture position, the best evidence is his actions and policies over the past 3 1/2 years.

The highlight of that time has been creating a series of tariffs that has led to retaliation and a trade war with China and other countries, largely hurting foreign markets for farmers.

“The president’s been very clear. He sees the approach he’s taking, this hard line approach, as one that, in his mind, works, and I think it’s likely to continue. We have no reason to expect anything different,” said Jim Mulhern, President of the National Milk Producers Federation during a virtual roundtable with farmers and agriculture leaders.

Trump also increased payments to farmers to help make up for losses and has directed some Coronavirus Aid, Relief, and Economic Security (CARES) Act money to agriculture interests.

“None of us can give a real strong view on what a trade policy would look like in a Biden administration, other than likely to be attempts to make trade agreements that have been done in the past,” Mulhern said, referring to the Obama administration, when Biden was vice president and Tom Vilsack was the Secretary of Agriculture.

Biden has presented his “Plan For Rural America” which includes general language without specifics on a number of policies that affect agriculture.

They include language about creating trade policies that “work for farmers”, promoting biofuels, expanding broadband access to rural areas and improving health care in rural areas.

That’s exactly what some farmers want to hear, like Pam Johnson, who grows corn and soybeans on her 1,000-acre farm near Floyd, Iowa, in the northern part of the state.

Johnson said the focus on biofuels is critical to her.

“My farm’s success and ability to survive depends on support of that market, that domestic ethanol market”, Johnson said.

President Trump has been hard on ethanol. In 2019, the Environmental Protection Agency exempted 31 small oil refineries from rules that would require them to blend ethanol into their fuel supply. In September, the President attempted to repair the relationship with corn producers when he announced a policy approving use of existing filling station pumps to distribute higher-ethanol gasoline. Johnson said it’s too little, too late, and she’s voting for Biden.

But Trump still enjoys widespread support in rural areas, including among some farmers.

Scott Long said even though President Trump doesn’t know a lot about agriculture, he has surrounded himself with people who do. Long, who raises cattle on 1,000 acres in southern Missouri near Cabool. He also owns a 10-employee meat processing operation.

Long said he likes Trump’s appointee to Secretary of Agriculture, Sonny Perdue, and the administration’s commitment to reducing regulation:

“As long as people have the right to farm, and the right to run cattle, hogs, sheep, whatever they want to do, we need people in there that are going to respect that. And I think Sonny Perdue has that type of attitude toward it,” Long said.

Long said Trump’s hardline position on trade will be worth it in the long run to all Americans, including farmers, and he supports the administration’s policies.

Even with those differences, the farm vote may not mean much this election.

David Kimball, political science professor at the University of Missouri-St. Louis, said rural voters overwhelmingly supported Donald Trump in 2016, and will again, regardless of how they feel about his agriculture policy.

“A lot of rural voters are not farmers, necessarily, either, so the people working in the ag industry is a fairly small portion of the American electorate, which is another reason agriculture policy may not be top of mind for many voters,” Long said.

Kimball says the only way agriculture might be the difference is if the election comes down to one or two swing states with large rural areas. Kimball said that is very unlikely.

And with issues like coronavirus, the economy and Supreme Court nominations looming large, agriculture issues won’t get much attention between now and November 3rd.