No pumpkin shortage this year, but climate change could squash Halloween harvests to come 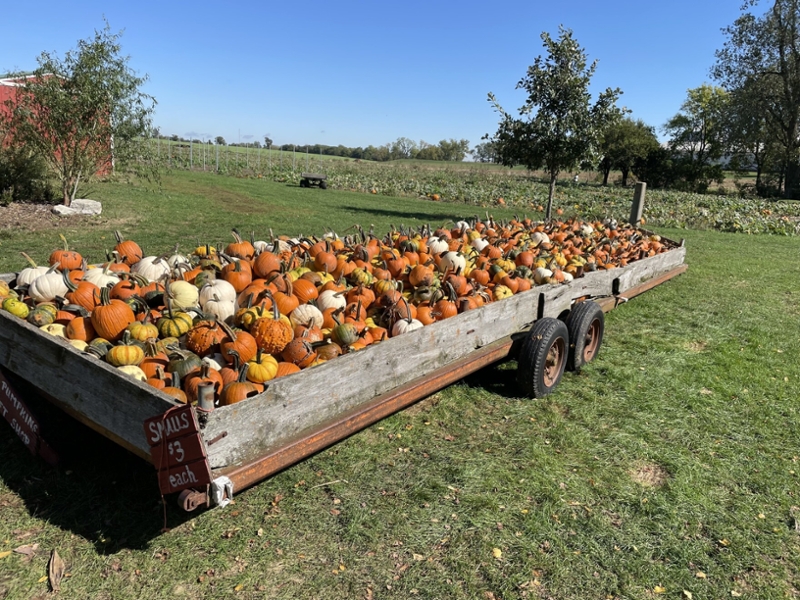 The bounty on this Illinois farm is some evidence that the pumpkin harvest this year was healthy. (Courtesy Of John Ackerman)

The great pumpkin shortage of 2021 is turning out to be as real as Linus’ Great Pumpkin. Neither ever showed.

Instead, despite some national headlines about a pumpkin shortage this year, Midwestern farmers say there’s nothing to worry about.

“God granted us quite a bounty this year,” says John Ackerman, who grows pumpkins in Morton, Illinois — the leading pumpkin producing state in the country.

In addition to corn, soybeans and wheat, Ackerman grows more than 160 varieties of pumpkins. The season didn’t start off strong.

“I was worried because it was very wet during the growing season, and that can lead to all kinds of problems with a pumpkin crop,” he says. “But we had just an incredible crop this year. We’re very blessed.”

Illinois saw a wetter-than-average growing season across the board, according to the state climatologist. That can lead to an increased risk of crop disease, says Mohammad Babadoost, professor of plant pathology at the University of Illinois.

“(Plant pathogens) like warm conditions. … In summer, if we do have moisture, particularly standing water ... the resting spore in the soil germinates,” he says.

The Midwest has already gotten warmer and wetter due to climate change, and will continue to do so over the next century.

Babadoost says that could be bad news for pumpkin farmers.

“It’s going to be really affecting higher incidents and higher severity of disease,” he says.

He says advancements in fungicides have helped prevent major outbreaks over the past couple of decades. But with enough rain, fungicides are rendered useless.

This year, though, that didn’t happen. He says there have been years where the whole pumpkin crop was wiped out by disease. But this year, he says, pumpkin farmers have had a fairly average harvest.

That’s for both processed and decorative pumpkins, Babadoost says.

Ackerman, who solely grew decorative pumpkins this year, says he had more issues with weed control than fungus outbreaks.

“Weed control is always a problem in our state,” he says.

As for a pumpkin shortage, though, Ackerman says the only shortages consumers might see would stem from issues in the supply chain, not in the supply itself.