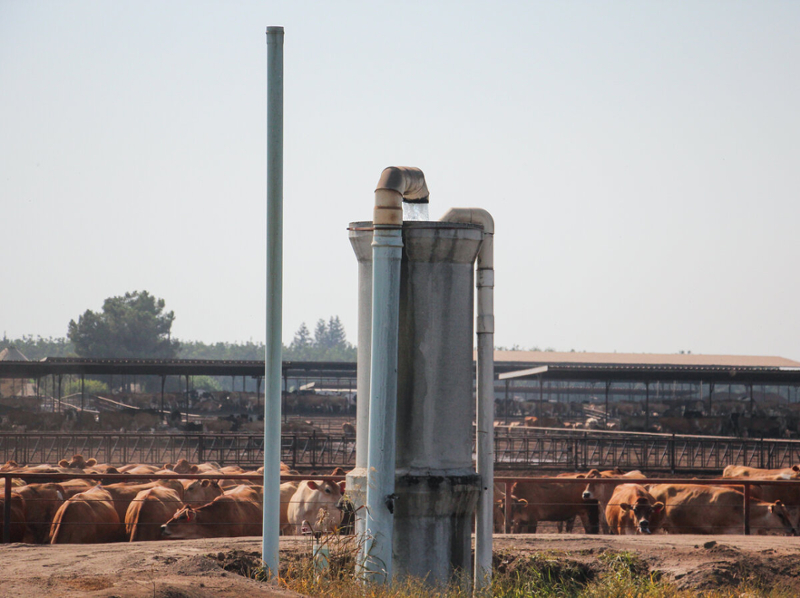 In a farming area east of Tulare, Calif., fields of corn and dairy herds depend on water from wells like this one. The state is now limiting the use of this groundwater. (Dan Charles/NPR)

California's agricultural empire is facing a shakeup, as a state law comes into effect that will limit many farmers' access to water.

The seven-year-old law is supposed to stop the over-pumping from depleted aquifers, and some farmers — the largest users of that water — concede the limits are overdue.

The state grows roughly 40% of the country's vegetables, fruit and nuts. But it's also famously prone to drought, and in those dry years, when farms run short of water from rivers and reservoirs, they turn on powerful pumps and draw well water from aquifers.

The limits on that water use will force many farmers to scrap practices that relied on unfettered access to that shrinking underground reservoir. "It's unsustainable to continue over-drafting the aquifer the way we are," said Rick Cosyns, a farmer near the town of Madera, just north of Fresno. "It's just a race to the bottom." (Cosyns was interviewed in August. He died unexpectedly on Sept. 7.)

This year's drought hit hard and fast. With rivers running low, there's little "surface water" available for agriculture. As a result, farmers' pumps ran hard this summer. Big pipes that emerge from the ground alongside fields and orchards delivered powerful gushers of water. State-wide, farmers to pumped an estimated six to seven million additional acre-feet of water this year, above what they normally use. (An acre-foot of water is 325,851 gallons.)

It kept fields and orchards green and productive, but there's collateral damage. Those deep agricultural wells suck the water out from underneath smaller domestic wells, like the one at Esther Espinoza's house outside the small town of Riverdale. "I see how the big pumps are pumping water, and we don't have water. It's something so sad for me," Espinoza says. "We have water for nothing. For the bathroom, or the kitchen. It's something which is so necessary, [that] we don't have."

She and her family now depend on water from a big black tank in their front yard, which a local non-profit fills up each week. Hundreds, and probably thousands, of households are in this situation, most of them in the southern part of the Central Valley, where aquifers are most depleted.

For 100 years in California, anyone could dig a well on their land and pump as much as they wanted. Farmers got most of it. They pumped so much water that the underground water table fell by more than 100 feet in some places. The ground itself subsided as water was pumped out from underneath it.

All that's supposed to end. The Sustainable Groundwater Management Act (SGMA), passed in 2014 but just now going into effect, treats the aquifer like a bank account that has to stay in balance. There can be withdrawals of water, but they cannot exceed the rate at which the aquifer is replenished.

The new restrictions are creating winners and losers among farmers.

Cosyns's farm, near Madera, is among the fortunate ones. It has another source of water. It's part of an irrigation district set up a century ago to distribute water from nearby rivers to farmers. Most of that water, today, is captured by a dam on the San Joaquin River.

A deep irrigation ditch runs alongside the almond orchard. It's empty this year because of the drought. "I'd sure feel better if this was full of water, and most years it is," Cosysns said.

Most years, when there's enough rain and snow, he could use that water to irrigate orchards and let some of the water just sink back into the ground. Eventually that water can filter all the way back down to the aquifer, hundreds of feet below.

It's a way to keep that aquifer bank account roughly in balance, making water deposits when there's plenty of water from the river, and pumping water out again when there's a drought.

Yet even here, the water table in the aquifer has been falling. The reason, Cosyns said, lay elsewhere. "The surrounding areas are pumping the water out from under us," he said.

Those farmers own land that's outside the irrigation district, and they don't get water from the dam on the San Joaquin River. They pump from the aquifer every year, making withdrawals but no deposits. Under the new law, that will have to end.

Cosyns had only limited sympathy. "We've made the investments" in securing additional water supplies, he said, "and others are getting into our bank accounts that we saved for." Farmers who rely solely on groundwater may think it's their right to do that indefinitely, "but we've come to that day of reckoning, when that's no longer going to be the case."

This is the main division in California agriculture as the groundwater law comes into force. On the one side are farmers in irrigation districts with secure access to water from California's rivers and reservoirs; on the other, farmers who've relied almost completely on their wells.

Many of the aquifer-dependent farmers will have to cut their pumping drastically, and that likely means they'll have to idle some of their land. According to some estimates, anywhere from half a million to a million acres will cease growing agricultural crops in the San Joaquin Valley, which covers a wide swath of land between Sacramento and Bakersfield.

This does not sit well with some farmers, such as David Roberts, who grows citrus crops in Tulare County. "We're going to turn the water crisis into a food crisis, because we cannot replicate the San Joaquin Valley anywhere else in the United States," he says.

No other place, he says, has the climate to grow more than 400 different crops. And when consumers realize what they're missing, he expects a backlash. "This ground will come back into production one way or another," he says. "The United States cannot be without the San Joaquin Valley producing fruit."

Roberts agrees that overuse of the aquifer has to end. But he wants the government to step in to deliver more water from rivers and dams to make up for the lost groundwater, to keep more land in production and also replenish the aquifer.

Other water experts say that's a pipe dream, and unnecessary. Some crops currently grown in the Central Valley, including almost half a million acres of corn used to feed dairy cattle, can easily be grown elsewhere. California's dairy industry is likely to contract because cattle feed will become increasingly scarce, they say, but consumers will barely notice.

In fact, some farmers think the future looks bright. "I actually think it's going to be a better future than the past has been," says Jon Reiter, a rancher and adviser to large-scale farming operations in the valley.

People already are working on creative ways to adapt and prosper, he says. Farmers and water managers are building the infrastructure to capture more water in years when it rains, flood their fields, and replenish the aquifer. That will allow them to pump more groundwater in the future.

Some land still will have to stop growing crops, Reiter says, "but we're going to take that land and put it to other uses." There are profits to be made leasing land for solar production, for instance.

"I see the San Joaquin Valley being really a solar hub, renewable energy hub for the whole of California," he says. "It could be a big part of our state achieving its renewable energy objectives."

There's also a new state program that will pay farmers to turn fallowed fields into habitat for birds, lizards, and native shrubs.

No one knows exactly what that Central Valley will look like when this all shakes out. Dozens of local committees are in charge of enforcing the new groundwater law.

Soapy Mulholland, a conservationist who's on half a dozen of these committees, says they include a much larger range of viewpoints than previously had influence over groundwater. "You're considering disadvantaged communities, the farmers, you're considering the environment, and all those players are at the table," she says. "And that's a good thing."