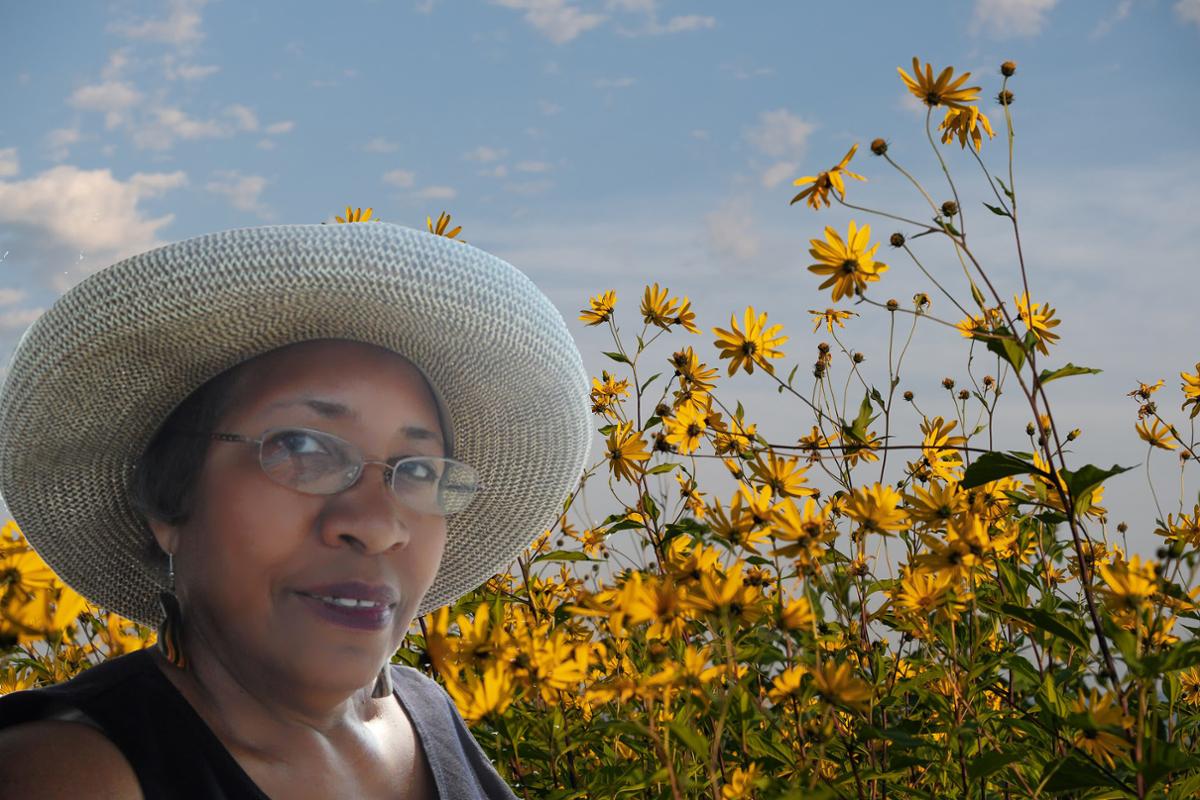 The artichokes that the poet writes about are Jerusalem artichokes, which grow as tubers with a sunflower-like blossom. (courtesy the author, public domaina and Kayte Young)

Beverly Fields Burnette grew up in Rocky Mount, North Carolina, where she lived with her mother and her mother’s two sisters. “I was quiet, and they thought I was just nosy,” she laughs. “I learned that if you don't sit right up close to grown people, they'll keep talking … you go and sit on the side of the porch, and you can listen, without looking directly at them.” She says that this early interest in the world of grown-ups led to an unexpected talent. “It has honed my skills for listening and remembering everybody's story,” she says.

Burnette’s first experience writing poetry was in English class in 10th grade. After working for hours to find inspiration, she decided to simply write a poem about the experience of having to write a poem. Her English teacher loved it. “She took it all around the school, and that just set me ablaze,” remembers Burnette. “Because she was so proud. And from then on, I didn’t have to write about the flowers or the moon or the stars. I wrote about what was around me.”

In southern springs we dug for artichokes

She dipped her snuff, but never, ever smoked;

At eighty-five, she wasn't avant-garde.

Her 'bacco spittings grew the vegetable;

Well nourished were the tubers, strong, the stalks.

And even though their worth was questionable,

With hoe in hand, we dug, postponing talk.

Once washed, soaked, sliced, they met some torrid brine.

When canned, the waiting was the longest time.

How many weeks or months before we eat?

In southern springs, we dug the precious root,

And still, this day, it is my passion fruit.

(From Catch the Fire!!!: A Cross-Generational Anthology of Contemporary African-American Poetry, Derrick I.M. Gilbert, editor. Republished and aired with permission from the author.)

Burnette says “Artichoke Pickle Passion: A Sonnet” was inspired by an older neighbor who made an impression of Burnette and her sister. Passing by an apartment complex on their way to church, they’d see Miz Olivia. “She'd be sitting on the porch,” recalls Burnette. “In a faded gingham dress, and she would pull her stockings up to her knee and put a little knot in it.” They would watch with curiosity as Miz Olivia chewed tobacco and spat it into her yard, where tall yellow sunflowers grew.

One day, Burnette’s aunt announced that they were going to Miz Olivia’s house to dig artichokes. “I didn't know what artichokes were,” she laughs. “But we went because you have to obey your elders.” Digging in the yard, Burnette came to realize that at the root of the yellow sunflowers, fertilized by tobacco, were small edible tubers known as Jerusalem artichokes. They’re now a favorite food of Burnette’s.

Burnette didn’t write the poem until long after Miz Olivia had passed away. Now, as an avid genealogist and historian, she wishes she would have asked more questions about this neighbor and her unique garden. “Sometimes you don't appreciate the elders around you,” she says. “I would have loved to have sat down with her, and found out her family history.”

Listen to the story, including Beverly Fields Burnette reading her poem, on this episode of Earth Eats.