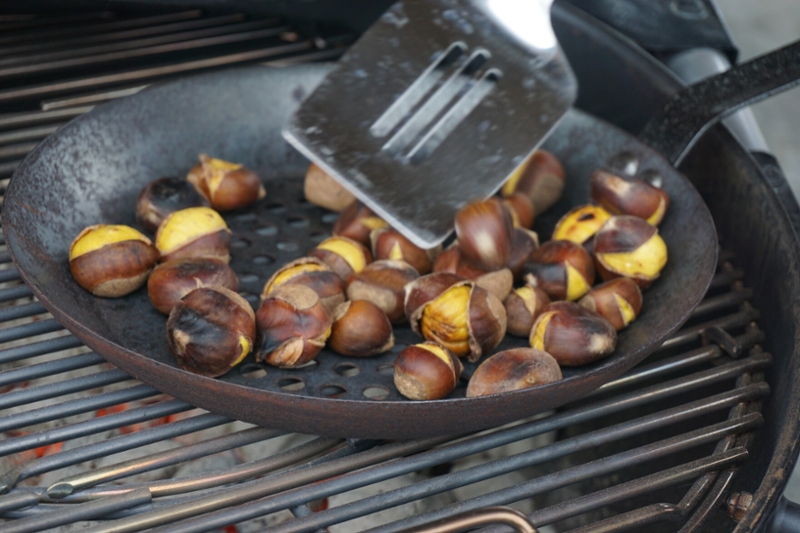 Americans eat more than 7.5 million pounds of chestnuts every year, most of them are imported from Italy, China and Korea.

Yet chestnut trees grow just as well in the Midwest. So the boutique crop offers a way for farmers to transition at least some of the acres they plant with corn, beans and wheat one year after the next into small-scale farming with less of the toil of their old row crops.

Bill Stouffer spent decades growing corn and soybeans on his farm near Tipton in central Missouri, but he decided about a dozen years ago he wanted to escape that grind. He was looking for a way to make his farm smaller and still profitable so he could leave his children some of the land that had been in his family for more than 200 years.

“I don’t want it to be a burden for them,” Stouffer said. “So we were looking for a crop that would give high yield per acre ...but have the farm be able to support itself and continue in the family.”

Stouffer planted 20 acres of chestnut trees in 2009. About three years later, they started to produce.

Chestnuts grow in spikey burrs on the trees that open up in mid-September, dropping the nuts on the ground. That means the harvest has to happen quickly, and it’s a fast turnaround to get them to customers. His family set up an online store.

“In four to five hours, we had more than 100 orders,” Stouffer said. “There is a tremendous demand for chestnuts.”

Stouffer’s family and a few hired high school students harvest the chestnuts using little wire cages on the end of a stick. Then they can clean, sort, and package them in a couple of rooms of their barn. The nuts go for about $6 a pound and sell out every year.

That level of demand is encouraging other people to explore chestnut farming. The USDA counted 591 chestnut farms in the U.S. in 2007 and 841 in 2017, the last year official numbers were collected.

But that number has likely gone up since.

“In the past few years, there have been tens of thousands of chestnut trees planted in the Midwest and a lot of new farms,” said Roger Blackwell, president of the Chestnut Growers of America who farms in New Milford, Michigan.

“We do market surveys of the chestnut growers and we find that the prices are very high, demand is exceeding supply,” said Mike Gold, professor of forestry at the University of Missouri. “Everybody sells out within a couple of weeks. So, all the needles are pointing in the right direction.”

The Chestnut Growers of America says the U.S. grows the crop on just about 2,500 acres and it would take more than 10,000 acres just to make up for what’s imported every year. By comparison, row crop farms average about 500 acres each, but many are thousands of acres.

Chestnuts appeal to small operations catering to the growing farm-to-market niche and don’t demand the large-scale operation of commodity crops like corn.

“The preference for ‘buy local’ is powerful. So somebody would much prefer to buy a Missouri chestnut if they are from Missouri than say a California chestnut and very much more than a European or Asian one,” Gold said.

Even with chestnut demand outpacing supply, advocates are still trying to expose more people to the taste.

Part of that effort is the Missouri Chestnut Roast Festival at the University of Missouri research farm, where chestnuts are literally roasted over an open fire.

Hundreds of people came out to the festival earlier this month to taste chestnuts, get recipes and learn more about the nut.

Daniel Blake was among those who tasted different breeds of chestnuts for market research. It was his first time eating the soft-textured nuts.

“It’s hard to compare them like anything else, really,” Blake said. “I’ve never tasted anything like that.”

Promoters hope people will like the taste so much they will eat them roasted or in recipes like chestnut dressing, hummus and even chili. Most chestnut farmers include special recipes with the nuts when they send out orders.

Chestnut farming doesn’t require expensive equipment like combines and can be profitable on a few acres.

Greg Heindselman, a chestnut farmer in Lewistown, Missouri, said the crop could provide a living on as little as five acres.

While the future or chestnut growing in the Midwest appears bright, it’s not all Christmas carols and tasty recipes.

“Growing chestnuts is hard work. It’s labor-intensive, and you always have something to do, almost year-round,” Heindselman said. “But it’s still worth it. It’s a great way to farm.”