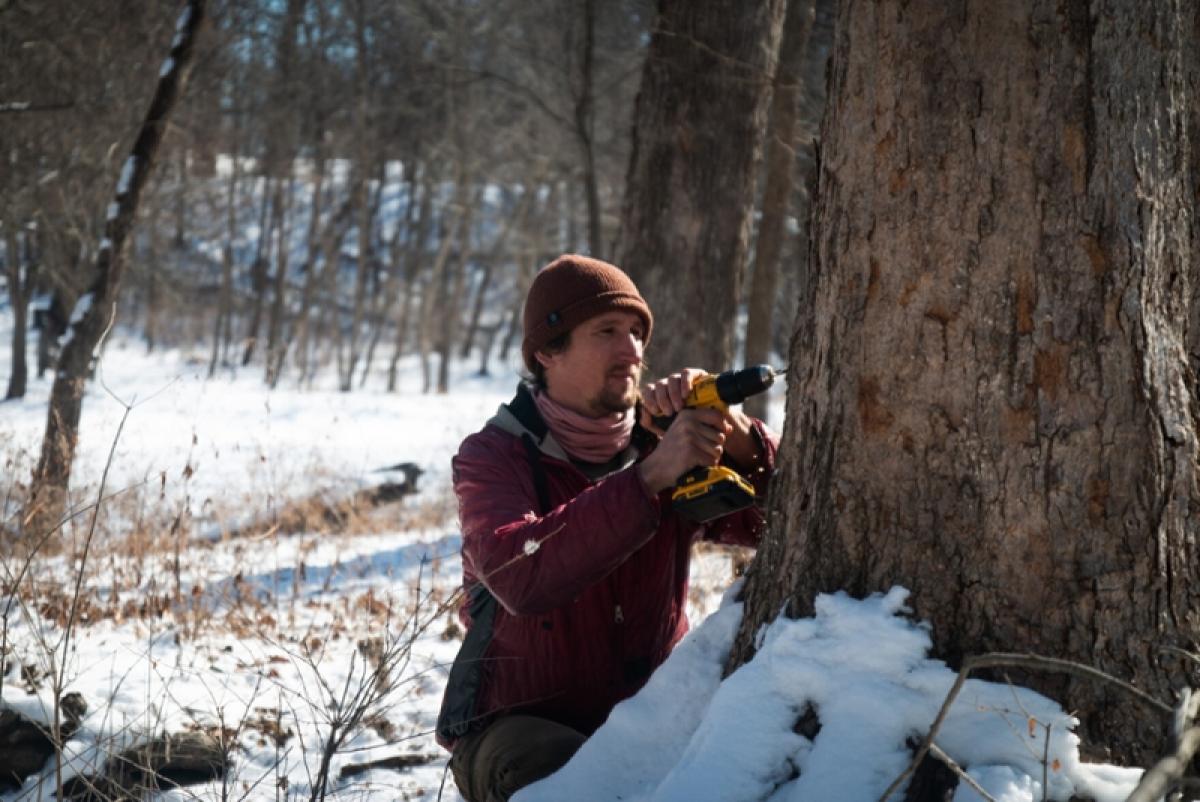 On a chilly day in late February, Ben Hoksch squatted in front of a large maple tree and drilled a small hole about an inch and a half into its trunk. He then put a small stainless steel straw — it’s called a spile — into the hole and tapped it into place with a hammer. (Madeleine King / For Harvest Public Media)

In recent weeks, producers and hobbyists across the Midwest have been tapping their trees and making maple syrup. They were waiting for just the right conditions for the sap to run: temperatures above freezing during the day that dip below freezing at night.

“This is kind of the first sign of spring for me,” said Ben Hoksch, owner of Front Yard Sugar on a day in late February when he went out to tap trees. “Folks are starting to see red-winged blackbirds, turkey vultures are flying north, sap is flowing.”

His business, located in Ames, Iowa, relies on residents allowing him to tap their trees, many of them black maples. In exchange, they get a free jar of maple syrup and he sells the rest.

While Wisconsin and Michigan are two of the top 10 U.S. maple syrup producers, Iowa, Illinois and Missouri have traditionally had hobbyists and smaller producers. Yet there’s potential for more syrup production in those three states in the years to come, even as climate change shortens the tapping season. That’s because maple trees are taking over more territory historically dominated by oak trees.

“Evolutionarily, we had fire on the landscape. There weren’t maples,” said Jesse Randall, the director of the Forestry Innovation Center at Michigan State University.

Over time through changes in forest management – like wildfire suppression – maple trees have moved into oaks’ place in areas such as northeast Iowa. Randall said that means the maple syrup industry has room to grow.

“It’s just a matter of, ‘Let’s train those individuals how to make syrup,’” he said. “Because historically it has not been a big industry.”

From hobby to business

Near the town of Bankston in northeast Iowa, Brian Wolfe and his family first got into maple syrup for fun.

“We started back in 2000. We wanted to do something with the children in the woods,” Wolfe said. “So we started collecting sap and making our own maple syrup for our own home use.”

The family now runs Big Timber Maple as a part-time business, along with their dairy farm. Last year, they produced 3,000 gallons of maple syrup.

Demand for their syrup was so high that by 2014 they began selling in two statewide grocery store chains, Fareway and Hy-Vee.

“Quite honestly a lot of people like local,” Wolfe said. “When they see an Iowa product they reach for that. There’s a lot of people that support us locally and we really appreciate that. We feel as if we’ve got a good product.”

For Mike and Debby Funk in Shirley, Illinois, maple syrup has a long family history. The Funk family first settled on the land in 1824, producing “sirup,” as it was then spelled, and sugar from the maple trees. Commercial production began with their ancestor, Arthur Funk, in 1891.

“We retail at our shop about 80% of that and the rest is mail-ordered to customers across the country,” Mike Funk said.

Located on Route 66, the family business attracts lots of tourists. Having their shop on “the Main Street of America” makes for interesting stories about their clientele. Debby Funk recalled a time when motorcyclists – possibly from Belgium – stopped in.

“There were a couple of guys and they each bought a half a pint of syrup,” she said. “And I looked out the window and they’re out there just drinking it – drinking the whole bottle.”

More maples, but a shorter season

Agriculture economists and foresters are looking into the potential of maple syrup production and room for the industry to grow, especially in southern Illinois and Missouri.

Hannah Hemmelgarn, the assistant program director at the University of Missouri Center for Agroforestry, got a grant to study the question. She said the region has close to 63 million maple trees large enough to be tapped.

“There’s a big opportunity here,” Hemmelgarn said, “and we’re not taking advantage of it in a way that I think can both help people to think about the value of maples ecologically and economically.”

The three-year project began last fall. Hemmelgarn said the goal isn’t to tap all the maple trees in the region, but to raise awareness of their value.

Yet as winters become shorter and warmer, some experts and producers worry about how climate change could impact their production and business.

“Climate change scares, and if it doesn’t, it should scare every producer,” said Jesse Randall of Michigan State. “The season is getting shorter.”

For many producers, tapping season has shifted forward over time, from a couple of days to weeks. The window to tap also is becoming shorter because of a lack of predictability with the weather conditions.

“We used to tell people that our season was four to six weeks,” Debby Funk said. “And now we're very lucky if we get four weeks. And it's more often two weeks or three weeks.”

Ben Hoksch, the small maple syrup producer in Ames, Iowa, said there isn’t anything he can do about climate change except continue to produce local food and “hope I’m being adaptable enough to just take advantage of the flow when it comes,” he said.

Once a year, he throws a maple syrup party. Every landowner who he taps for gets invited to enjoy pancakes and music, and he doesn’t expect that to change.

“Maybe,” he said, “it will mean I schedule my party a week earlier every year.”