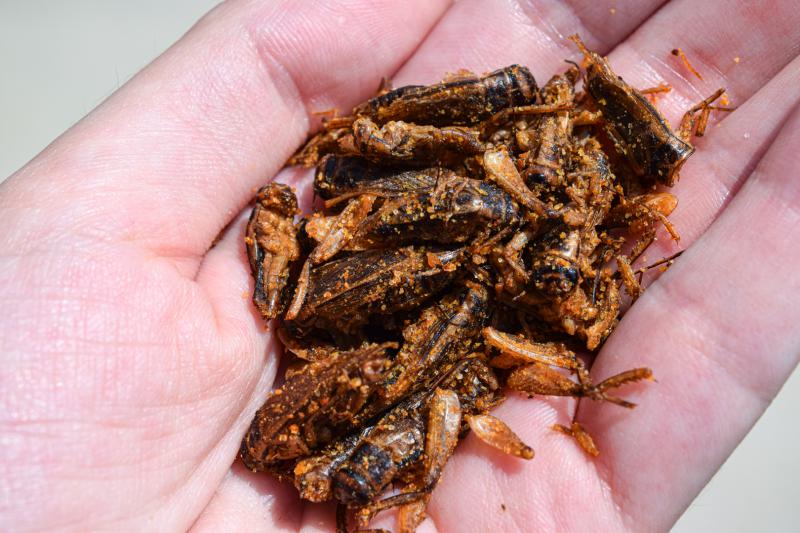 On a recent hot Saturday morning at the Des Moines Farmers Market, lots of people walked by a tent that had signs hanging from it: “dare to eat differently” and “eat prairie lobster.” Some people scrunched their faces in disgust. Others – like the Gohr family – were curious.

“Should we try a cricket, guys?” Charles Gohr asked his daughters.

Gohr bought a packet of smokey barbeque roasted crickets for his daughters, Reese, Everly and Charlie. Reese, 8, put one into her mouth but quickly took it out.

Both of her sisters rated it “not bad.”

The roasted cricket stand belongs to Shelby Smith of Gym-N-Eat Crickets, who is known as the “local bug dealer” – at least it says so on her apron. Smith also sells cricket powder and cricket protein bars. The protein bars include flavors like chocolate mocha and banana bread. But Smith said her smokey barbeque roasted crickets are her bestseller.

“Hot and spicy and buffalo ranch are my two favorites,” Smith said. “Fiesta tastes kind of like doritos.”

Smith eats crickets every day – by the handful, in a taco or on eggs.

Smith got into cricket farming in 2018. She grew up on a farm and moved to Ireland after college to play basketball. When she moved back to Iowa in 2017, she helped her dad with the harvest. He advised her to explore something other than corn and soybeans.

Smith heard about edible insects on podcasts and started researching. She bought crickets from Amazon and tried them. She said they were airy and bland.

She wants her customers to have a better first experience than she did, so she spices up her crickets a little.

“I want everybody to have the most tasty cricket that they can for their first cricket, because for some Americans, that's going to be the only shot you get at getting them to eat insects,” Smith said.

The process starts on a small farm just outside of Ames, Iowa. Smith bought her first 10,000 live crickets, but since then, she has raised her own crickets.

Silver bins line the walls of a barn about the size of a one-bedroom apartment. Each bin has egg crate flats, some water and cake pans with moist peat moss for the females to lay eggs in. Smith estimated there were about 750,000 residents in what she calls a “cricket metropolis.”

“They don’t all lay their eggs exactly where they’re supposed to,” Smith said. “There’s places around the bin where you’ll find some stray eggs.”

In late July, the male crickets were chirping, ready to breed.

“They are only a few days away from harvest,” Smith said. “They just don’t know it yet.”

Every month and a half, Smith harvests the crickets by putting them in a freezer. She then boils them before roasting them for snacks or baking protein bars.

Insects have been picking up steam as an alternative protein source. They take less water, land and feed to produce than beef or pork.

Wendy Lu McGill, the interim executive director of the North American Coalition for Insect Agriculture, said education and exposure are key to getting people to give insects a chance.

“And when you are feeding people insects, the ‘it’s not so bad’ reaction is kind of our entryway to get people to just expand what they’re eating,” McGill said.

McGill said she’d like to see edible bugs become more standard, kind of like how oat milk or almond milk took off in the market.

Insects are already a pretty normal food for more than 2 billion people around the world, according to a 2013 report from the Food and Agriculture Organization of the United Nations. Historically, insects were a part of indigenous diets in North America, but colonial settlers looked at them with disdain. Insects are still mostly looked at as pests today, but over the last several years, they’ve been making a comeback into the food scene.

Manju Reddy, a professor of food science and human nutrition at Iowa State University, said eating insects in places like Ghana has to do more with people not always having access to food.

That’s what Reddy and a student from Ghana found through research. Reddy said it would take a while for insects to become a regular part of the menu in the United States.

“In my personal opinion, it’s going to take a long time to make it as a staple food,” Reddy said. “It can be an additive.”

Reddy said insects are not expensive to produce in Ghana because people are trying to teach others how to grow them in their own backyards. But in the United States, it’s expensive to farm insects because it’s a relatively new industry with little research. Also, there are no government subsidies.

Smith knows there is a long way to go but says her cricket products are getting more exposure. They’re now sold at more than 40 Hy-Vees in five states.

“If we can even just get a fraction of the people that eat seafood to start eating insects, I think we're winning,” Smith said. “It's just changing the way Americans think about food, one bug at a time.”